Huskers hitting their stride heading into trip to No. 5 Iowa 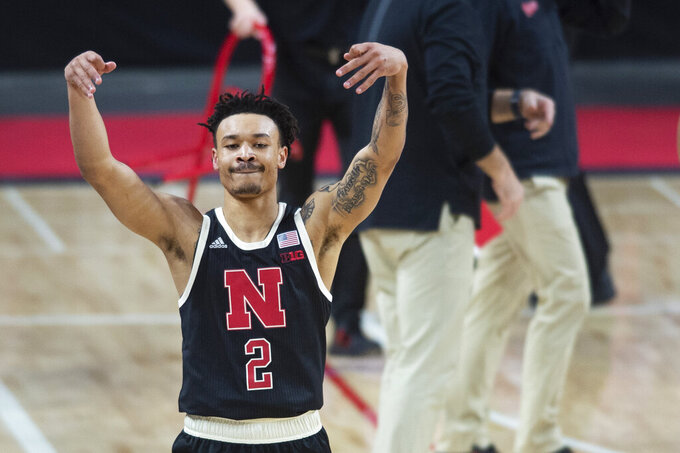 Nebraska's Trey McGowens celebrates a three-point basket he made against Rutgers shortly before a timeout in the second half of an NCAA college basketball game Monday, March 1, 2021, in Lincoln, Neb. (Kenneth Ferriera/Lincoln Journal Star via AP)

Something totally unexpected is happening for Fred Hoiberg's Nebraska Cornhuskers.

It would have made more sense for them to have gotten worse during the final stretch of the season, given they recently were mired in one of the longest Big Ten losing streaks in years and had a revised February schedule that stacked makeup game upon makeup game.

More remarkable is the fact the Huskers (7-17, 3-14 Big Ten) are coming off their most lopsided conference win in five years — and it happened the same day their leading scorer, Teddy Allen, left the team.

“The biggest thing our guys have continued to do is stay completely locked in with everything we're trying to teach through all the adversity we've had to handle,” Hoiberg said. “I'm not sure there's a team that's had more than we did with the 20-day complete lockout and having four-and-a-half practices and then having to play seven games in 12 days in five states.”

“The easy thing to do would be to shut down,” Hoiberg said.

Instead, the Huskers head to Iowa City off consecutive Big Ten wins for the first time since February 2019.

After beating Minnesota 79-74 on Saturday, they hammered Rutgers 72-51 on Monday for their biggest winning margin in conference play since they beat the Scarlet Knights 87-63 in February 2016.

“You look at the last six or seven games, they’ve played really well,” Iowa coach Fran McCaffery said. “You kind of see it coming. They were going to win some. They’re a tough team. Just happen to be in a really good league.”

It also coincided with Allen being on the way out. He scored a career-high 41 points to set a Pinnacle Bank Arena record in a loss to Penn State on Feb. 23, then played poorly in the next game against Illinois.

He was benched for all but 10 minutes against Minnesota and went scoreless. Monday, hours before the Rutgers game, he left the team. Nebraska was Allen's third Division I school and fourth overall, and no specific reason was disclosed for his departure.

“I felt like with Teddy being gone, everybody else just had to be better and step up,” junior guard Trey McGowens said.

Over the last two games, the Huskers have shot 53% overall and 41% on 3-pointers, McGowens has made 9 of 12 shots from the field with 10 assists, and big man Derrick Walker has become more of a presence with 26 points, 15 rebounds and three blocks. The team had 19 assists in each game.

“It's amazing what that does for the confidence, the spirit of the group, to come in each day and know the hard work they're putting in is paying off,” Hoiberg said.

Iowa represents a much greater challenge. The Hawkeyes beat then-No. 4 Ohio State 73-57 on Sunday and have national player of the year front-runner Luka Garza. The Huskers haven't won in Iowa City since 2012.

“We want to continue on this positive momentum,” Hoiberg said. “We could play great tomorrow and get beat by 20. Iowa is that good and playing that well right now.”