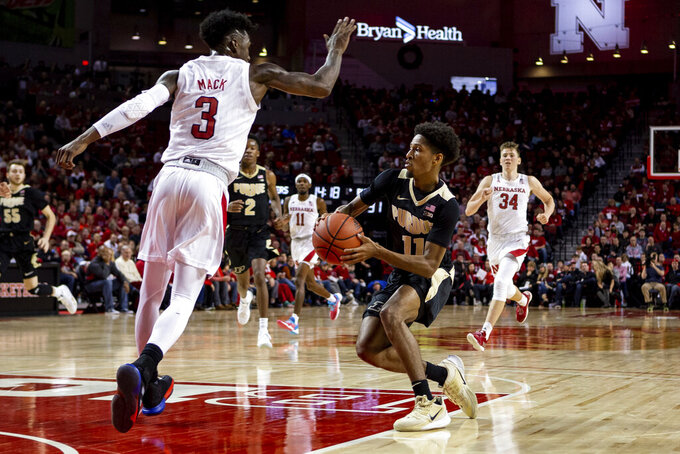 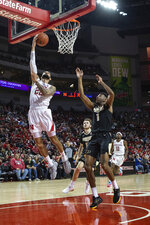 LINCOLN, Neb. (AP) — The outlook for what Nebraska might be able to accomplish in its first year under Fred Hoiberg looks quite a bit different now than it did a week ago.

The team that got shell-shocked at Creighton eight days ago in what was one of its four losses by at least 17 points looked like a competent Big Ten team this weekend, bouncing back from an overtime defeat at Indiana with a 70-56 win over Purdue on Sunday.

“I'm hoping that Creighton game was a turning point for us,” Hoiberg said. “The next morning we had a film session where we talked about a lot of things. I don't think guys took it personal. We've grown since that situation. Then to bounce back with that effort at Indiana. I would have loved to have won it. One of the hardest things in the this business is to put a tough, devastating loss behind you.”

The Huskers, who lost 96-90 at Indiana, overcame difficult circumstances to knock off the Boilermakers. They were playing their second game without Jervay Green, who's suspended indefinitely, and they were going against an opponent that held a big size advantage on one day of rest.

“We've come a long way,” Burke said. "This year has been a roller coaster. We are at a point now where everybody is buying in, buying into the coaches, watching film with coaches. We're going to build on this."

“Oh, they were awful at the beginning of the year,” he said. “You watch them on film, you don't show it to your team. You watch them against Creighton, they were down 37-7 or whatever it was. Then you see that effort against Indiana and you hope that team doesn't show up. I hoped the team that played Creighton showed up.”

Mack said he was surprised no one before him at Nebraska had recorded a triple-double.

“It's been a lot of great people who have come through Nebraska,” he said. “For me to have the first triple-dub, give glory to God.”

Burke made four 3-pointers, including one that pushed Nebraska's lead to double digits in the last 3 minutes, and he followed that with a fast-break dunk off Mack's pass to all but finish off the Boilermakers.

Purdue shot a season-low 30.4% (24 of 79), never able to complete a comeback despite making several pushes in the second half.

Haanif Cheatham's 3 from the left corner stretched it to 42-27 early in the second half. Purdue cut it to two points before the Huskers built up their lead again.

“If we could have come back and won this game, it would have been a shame. It really would have,” Painter said. "I thought Nebraska played harder than us, they were more ready to play. For a team that played Friday night on the road, you would think it would be the flip of it."

Purdue: The Boilermakers had their worst shooting game of the season, and that led to its first loss in four games in the series with the Huskers. Purdue had come in having won six of seven against Nebraska and scoring 75 points in each of its last three visits to Pinnacle Bank Arena.

Nebraska: The Huskers, who have struggled shooting up until this weekend, have found something offensively. It was a balanced effort. It also showed moxie, showing up like they did after playing a grinding game against Indiana on Friday.

Purdue's Matt Haarms left the game with 6:10 remaining with an apparent head injury. The 7-foot-3 Haarms and Nebraska walk-on guard Charlie Easley got tangled up as Easley drove to the basket. Haarms hit his head on the floor and was tended to by athletic trainers. He staggered as he got up and, with assistance, went to the locker room.

After the game, Painter said it was his understanding Haarms had a concussion. “He didn't seem to have his wits about him when I went over there to look in his eyes. He was dazed,” Painter said.