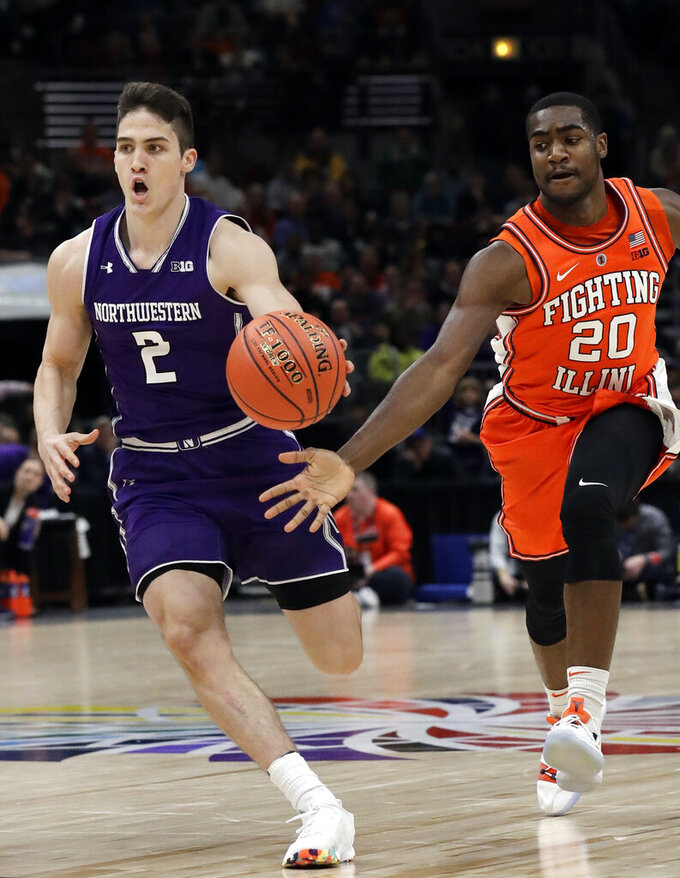 Northwestern guard Ryan Greer, left, drives to the basket past Illinois guard Da'Monte Williams during the first half of an NCAA college basketball game in the first round of the Big Ten Conference tournament in Chicago, Wednesday, March 13, 2019. (AP Photo/Nam Y. Huh) 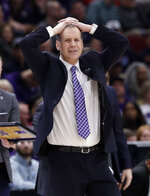 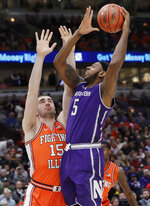 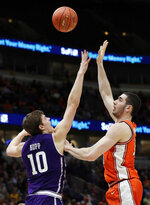 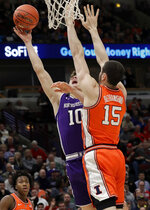 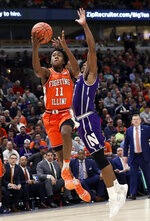 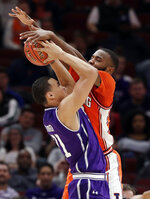 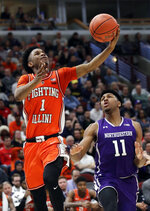 CHICAGO (AP) — Despite having his big night cut short, Giorgi Bezhanishvili had a good feeling as he watched overtime after fouling out late in regulation.

The freshman center believed in his teammates.

Bezhanishvili scored 26 points, Trent Frazier added 21, including the go-ahead 3-pointer late, and Illinois rallied for a 74-69 overtime victory against Northwestern on Wednesday night in the opening round of the Big Ten Tournament.

Andres Feliz had 11 points and a career-high 10 rebounds as Illinois (12-20) won for just the second time in seven games.

"I was just really excited," Bezhanishvili said of his mood in overtime. "I so was confident in my guys because I knew they would leave it all out there. I felt like we were going to win the game and we did.

"It was just a great feeling."

The Wildcats were playing without leading-scorer Vic Law, who sat out with a right knee injury.

Law was injured in the regular-season finale against Purdue. He banged his knee against the shin of Purdue's Carsen Edwards and had to be helped off the court. He sat on the bench on Wednesday but was not in uniform.

"It kind of went back and forth, punch for punch," Northwestern coach Chris Collins said. "They answered all our runs, we kind of answered theirs. It was a really well-played game. Guys played really hard.

"In overtime, they made a couple more plays than we did."

After Northwestern's Aaron Falzon scored five quick points in overtime to give the Wildcats a 66-63 lead, Illinois scored eight straight to turn around the back-and-forth battle for the final time.

Frazier made a 3-pointer for a 68-66 lead with just under three minutes to go and Ayo Dosunmu hit another 3 on the next possession for a 71-66 advantage.

"The floor kind of opened up with Giorgi not in there," Illinois coach Brad Underwood said. "We did a good job of finding open shooters."

Northwestern settled down on offense after a rough start as Illinois took a 30-27 halftime lead.

The Wildcats then made their first five shots to start the second half and took their first lead of the game, 35-34, on a 3-pointer by Turner.

Northwestern took its biggest lead of the game, 48-43, with just under 12 minutes to play before the Fighting Illini ran off five straight points, tying it on a Frazier 3-pointer with 10 minutes remaining.

After a Wildcats free throw, Bezhanishvili scored inside to put Illinois on top, 50-49, with nine minutes to go.

Northwestern was able to survive a 1-for-10 shooting stretch in the middle of the second half and took a 59-58 lead with 1:28 left on 1 of 2 free throws. Frazier answered with a 3-point play with 35 seconds to go, but Turner was fouled by Bezhanishvili (his fifth) with 17.1 seconds left. Turner made both to tie the score at 61 and force OT.

Northwestern: Even with a healthy Law, the Wildcats didn't have enough perimeter shooting to be competitive in an elite conference like the Big Ten. The lack of a true point guard was another reason they averaged just 60.5 points in league play during the regular season.

Illinois: With Bezhanishvili on the bench, things appeared bleak for the Illini early in OT. But other players stepped up to keep the season.

When the teams played on Mar. 3 in Champaign, Pardon, a senior, had the best of the matchup with Bezhanishvili. The freshman's turnaround on Wednesday — he was 12 for 15 from the field — is indicative of the way he improved in the second half of the season.

"To go do that on this stage at this moment . he's light years from where he was," Underwood said.

Northwestern: The Wildcats season is over.

Illinois: The 11th-seeded Illini face No. 6 Iowa in the nightcap of Thursday's doubleheader.