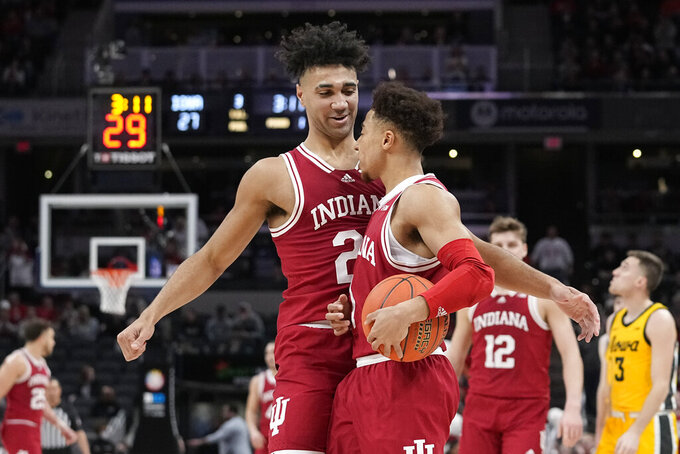 Indiana's Trayce Jackson-Davis (23) reacts with Rob Phinisee during the first half of an NCAA college basketball game against Iowa in the semifinal round at the Big Ten Conference tournament, Saturday, March 12, 2022, in Indianapolis. (AP Photo/Darron Cummings)

INDIANAPOLIS (AP) — When Mike Woodson accepted the Indiana coaching job last spring, he made a simple pitch to Trayce Jackson-Davis.

He wanted the star forward to return so he could polish his game and help re-establish the Hoosiers as a national power. Indiana's 2019 Mr. Basketball Award winner found another reason to come back: He wanted to play in the NCAA Tournament.

On Tuesday night, the junior will lead his Hoosiers teammates into a play-in round game against Wyoming, ending the school's seemingly interminable five-year tourney drought.

“I think we’ve proven not only to the Big Ten but to the country, we’re a team that can compete with anyone," Jackson-Davis said after Saturday’s conference tourney semifinal loss to Iowa. “So it took a last-second 3-pointer to beat us, the hottest team in the Big Ten right now. It stings, but at the same time I feel like we’ve got a lot of ball left.”

It's been years since hopeful Hoosiers fans heard such encouraging words entering the postseason.

Just last week, nobody, not even Jackson-Davis, was certain Indiana could make the 68-team NCAA field. The Hoosiers had again frittered away a late lead in a Senior Night loss to Rutgers, and blew yet another lead in the regular-season finale at archrival Purdue.

The excruciating closing run had most bracketologists projecting Indiana to be among the first four teams left out.

Instead, Jackson-Davis and guard Xavier Johnson, a transfer from Pittsburgh, teamed up to convince the NCAA's selection committee Indiana (20-13) deserved a bid.

Jackson-Davis had 24 points and eight rebounds in a 74-69 second-round victory over Michigan. He dominated the second half of a 65-63 quarterfinal victory over Illinois and had the Hoosers positioned to force overtime against eventual tourney champ Iowa — until Jordan Bohannon banked in the tie-breaking 3-pointer from 35 feet with 0.8 seconds left.

While it was a disheartening end their first semifinal run since 2013, Indiana went home oozing with confidence.

“This team made major strides this weekend," Woodson said. “We’re battled tested, we've been in so many games and the games that we've come up short, it’s been tough. But our guys have always responded and we'll respond again after this one."

At least, they'll get another shot. The last five Indiana teams did not, marking the school's longest NCAA drought since 1968-72.

Coach Bob Knight's first season in Bloomington was the final year of that run.

The Hoosiers want to be remembered for more than just ending the drought. A victory over Wyoming (25-8) would send them to Portland, Oregon, for a Thursday contest against fifth-seeded Saint Mary's. Two wins could set up an East Region classh against UCLA.

And, yes, Indiana knows all about Mick Cronin managed to put the program back on track last March by leading the Bruins from the First Four to the Final Four in his first tourney appearance at the school.

"That was something that was actually spoken even before the Big Ten Tournament," point guard Rob Phinisee said. “Like our season is not over yet and no matter what happens you can always make a run at the end of the season."

Indiana hasn’t advanced beyond the Sweet 16 since 2002. For now, players are focused exclusively on Wyoming and Woodson knows they can't have it any other way if they want to write their own legacy in the long, illustrious history of this blueblood basketball school.

The Hoosiers own five national championships, two of which bookended Woodson's college career, and the first-year coach has spent this season reminding players of Indiana's most prestigious tradition — hanging banners.

No players on this team has celebrated that moment yet. After falling short in the Big Ten regular-season title chase and conference tourney, Jackson-Davis and his teammates enter this postseason with visions of leaving this team's mark in the Assembly Hall rafters.

“I’m a Hoosier born and bred and just coming back for my third year playing for this guy next to me, it’s been an honor,” he said, referring to Woodson. “We didn’t have the year we wanted, but just showing people at this tournament and believing in what we’re doing and how he’s going to help us get to where we need to be, I think this tournament has shown that we’re still here. And Indiana basketball is going to get back on top here soon.”