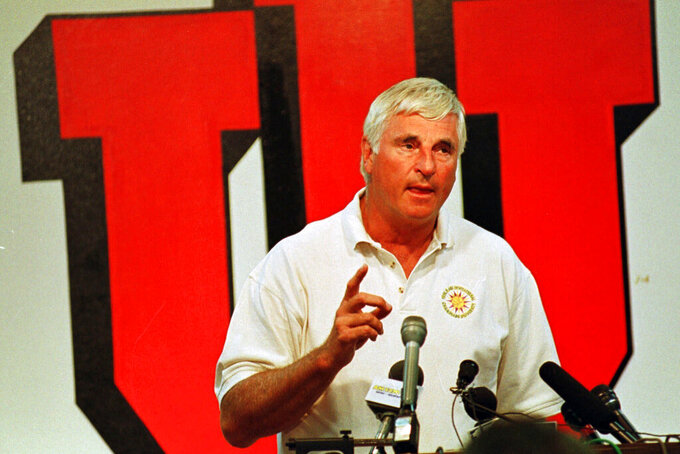 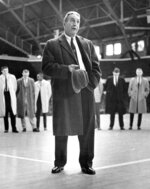 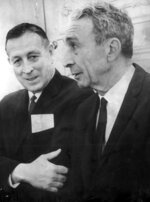 INDIANAPOLIS (AP) — Tony Hinkle and John Wooden created coaching manuals that were passed down for generations. Bob Knight and Gene Keady added new chapters in the 1970s and 1980s.

Today those four names form the Mount Rushmore of basketball innovation in Indiana, where successful coaches have spent more than a century testing novel concepts, breaking barriers and polishing philosophies before introducing them to America.

Here, Wooden crafted the “Pyramid of Success" and Hinkle lobbied for orange basketballs. Here, Ray Crowe led two all-Black teams to prep titles in the 1950s with the triangle offense and Knight won three national titles at Indiana with the motion offense. Here, Larry Bird took the Indiana Pacers to the NBA Finals with a throwback approach and Brad Stevens' appreciation for analytics led him from Butler to the Boston Celtics.

Over the next three weeks, NCAA Tournament fans will get a glimpse into Indiana's unique passion for the sport.

“It’s the tradition,” said Steve Downing, who won the 1969 state title with Indianapolis Washington before playing for Knight at Indiana. “It’s the way they talk about it, they way they write about it, the way they put pictures in the paper. I’m appreciative I played when I played because that’s what everybody talked about."

They still do; and fans don't just talk players, they talk everything basketball.

That's why the sport's inventor, Dr. James Naismith, is widely credited with calling Indiana the “center of the sport.” It also explains why the state's coaching tree doesn't just start with a few familiar names or end at the state's edge. The limbs branch out far and wide, linking pioneers and innovators, activists and politicians, revered figures and colorful personalities with leaves sprinkled throughout this year's 68-team tourney field.

Baylor coach Scott Drew was preceded and succeeded at Valparaiso by his father, Homer. Bryce Drew, Scott's younger brother, is back in the tourney as Grand Canyon's coach nearly a quarter-century after making one of the most memorable buzzer-beaters in tourney history.

Those names only hint at the state's deep coaching roots. From Gregg Popovich to Jerry Sloan, everyone seems to have an Indiana tie and a Hall of Fame resume. Even the father of the father of Title IX, Birch Bayh Sr., coached Indiana State for five seasons.

It was Hinkle who set the standard during 41 seasons at Butler.

“He had a lot of shuffle cuts and movement and everything," said Bloomington South High School coach J.R. Holmes, the state record-holder for victories. “We still try to do that.”

There’s a refreshingly small-town component to the legacy, too.

Wooden was born in tiny Hall, Indiana, before attending Martinsville High School. Eventually, he turned down a chance to play for Hinkle, choosing instead to play for Ward Lambert at Purdue.

Lambert attended high school in Crawfordsville, Indiana, played at Wabash College and spent four years coaching preps before taking the Purdue job in 1916. There he won 371 games in 29 seasons before turning the program over to a former player and ex-teammate of Wooden, Ray Eddy, who coached Purdue until 1965.

Wooden took a different journey. After coaching at the high school level before World War II, he took the Indiana State job after serving in the Navy in 1946. His first team turned down an invite to the 1947 NAIA Tournament because Black players couldn’t compete. A year later, with the rule changed, the Sycamores participated in the tourney and then Wooden left for UCLA where he won 10 national titles.

But his concepts took hold in his home state.

“I read all his books and learned about the zone press, the offense he ran, how he treated people, how he taught people,” Keady said. “He and (Kansas State coach) Tex Winter were probably the biggest influences on me.”

The Hoosiers have their own rich history.

Longtime high school coach Sam Alford, whose son Steve and grandson Kory are college coaches, and Bob “Slick” Leonard, who made the winning free throw in the 1953 NCAA championship game and later coached the Pacers to three ABA titles, credit McCracken for influencing their styles.

Garret eventually replaced Crowe at Indianapolis Crispus Attucks in 1958 and captured the school’s third state title --its first without Oscar Robertson -- in 1959. Crowe went into politics and appeared in "Hoosiers' as coach of South Bend Central in the title game. His favorite offense became an NBA staple in the 1990s.

“They talked about the three-man offense, the triangle. We did that in high school,” said former Attucks and Purdue star Willie Merriweather, who later coached George Gervin in high school. “Me and Oscar were watching the NBA one time (in the 1990s) and we said, ‘Look, they’re doing the same thing we did.‘”

Lou Watson wound up replacing McCracken, his mentor, in 1966 and stayed there until Knight arrived in 1971.

Knight coached the last undefeated Division I men’s team and retired as the winningest coach, thriving during one of the state's most glorious coaching eras with Keady at Purdue, Digger Phelps at Notre Dame, Homer Drew at Valparaiso and Rick Majerus briefly at Ball State.

And their methods, like Hinkle's, trickled down through the generations and spread like wildfire across the nation.

“I heard my dad say, I bet hundreds of times, ‘If I hadn’t played for Coach Hinkle, I don’t know what I’d do in practices to prepare for a game," former Butler star and eventual high school coach Billy Shepherd said. “They took what Hinkle offered and used it. They cheated on the exam."