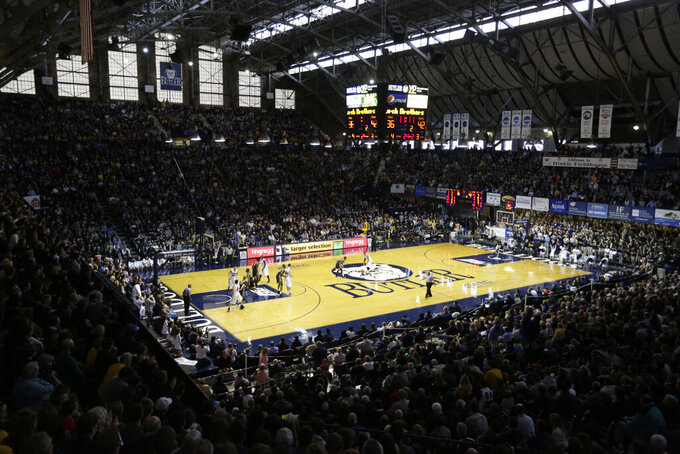 INDIANAPOLIS (AP) — Bill Butcher and Bobby Plump grew up a generation apart and in remarkably similar worlds when it came to basketball in their home state of Indiana.

Both produced movie-script moments by leading their small school teams to the state finals. And both also remember scrambling to get the Sunday newspaper all those years ago to do something any college basketball fan can still relate to: They wanted to fill out their brackets, not for the NCAA Tournament but for Indiana's fabled single-class tournament.

Watching 68 teams battling for the NCAA title entirely in Indiana has brought back a flood of memories for people like Butcher and Plump, and comparisons to the state’s long-gone tournament format so familiar to the casual basketball fan because of “Hoosiers.”

Before March Madness, there was Hoosier Hysteria and it reigned supreme.

“When I played, there were over 400 teams playing for one state title and every tournament game was in the paper," said Butcher, who played for his father at tiny Loogootee. “People couldn’t wait to get the paper and track the brackets and you’d come up with your own final four. Teams were ranked one through 20 back then, so you had an indication of who the top 20 teams in the state were, though it didn't always work out that way."

Plump, whose winning shot in the 1954 state championship game for little Milan High became the inspiration for “Hoosiers,” said he didn’t know a thing about the NCAA Tournament back in those days.

“High school basketball was the epitome of everything around here. Coming from the little town of Pierceville and going to Milan, we didn’t even get news from Indianapolis,” he said. “Heck, if we had known how good those teams were, we might not have won.”

But they did. And Plump and Butcher became early poster children for bracket-busting in Indiana.

Plump's shot for Milan is one of the most famous in basketball history. And it is only part of the lore in Indiana. The next year, Oscar Robertson led Indianapolis Crispus Attucks to the state title — a first an all-Black team in the U.S. The names and schools are steeped in history: John Wooden of Martinsville, Larry Bird of Springs Valley, George McGinnis of Indianapolis Washington, Glenn Robinson of Gary Roosevelt, Rick Mount of Lebanon.

If Butcher had won the 1974-75 title, instead of finishing second, his name might be on that list, too.

After turning down on offer to play for Red Auerbach’s Boston Celtics in 1957, Butcher’s father, Jack, returned to his little hometown and became the winningest prep coach in state history. Twice he led teams to what the state finals; the 1975 team was unbeaten and his son was leading the way.

The Lions beat Columbus North 50-27 in a semifinal earlier in the day only to struggle that night against powerhouse Marion in the title game. While Butcher led Loogootee with 14 points in his final game, he didn’t shoot well and Marion won, 58-46.

Now 64, Butcher can still rattle off the wins from that season like they just happened, even if the final moment was a loss. He still carved out a niche in Indiana lore that rivals Plump’s last shot. At the end of the Loogootee’s semi-state championship victory over Seymour, an assistant coach suggested it was time for Butcher to deliver on a promise to honor his father.

“He told me ‘If you’re ever going pass the ball to your dad, you better do it now,’” Butcher said. “So I got up, ran over to the scorer’s table and checked in. I was dribbling around, hamming it up and then I went right over to the bench, did a reverse pivot and threw it right to him. He caught it. The ref looked at my dad and my dad looked at the ref and the ref didn’t know what to do right away. Finally, he blew the whistle.”

The memories from those days never fade away and stretch beyond the state lines.

“It’s so cool to do a state tournament where you combine all the classifications,” said Gonzaga coach Mark Few, whose team hoped to become the first unbeaten NCAA champion in 45 years. “I know in Washington sometimes, the best teams aren’t always from the biggest classification, they’re from a classification down or two.”

Indiana's single-class format died in 1998 when, after 87 years, the IHSAA switched to a four-class system over the objections of Plump, Butcher and many others. Initially, the governing body attempted to calm the furor with a “tournament of champions” featuring the four class winners. Two years later, it was scrapped.

Gone were the days of cramming of 41,046 fans into a state title game as Damon Bailey's Bedford North Lawrence championship team did in 1990. Gone were the downtown parade so many Indiana prep players grew up dreaming about.

On Saturday, the eight state finalists won't even have center stage to themselves.

A year after the Indiana tourney was canceled because of COVID-19 and a week later than usual because of the NCAA's revised tournament schedule, the four state championship games will be played at Bankers Life Fieldhouse — just a few blocks away from Lucas Oil Stadium and the Final Four. It's just not the same.

Still, the tourney tales are part of the legacy handed down through generations and it's been that way almost from the moment the first organized game was played in Crawfordsville in March 1894 between two YMCA teams.

Here, hardwood heroes became the stuff of legend. Here, bracket pools were popularized. And here, while Plump and Butcher became role models for all the little schools that never made it, the single-tourney class lessons remain as vivid today as they were when the stars were playing.

“That year (1975) was the last time gave out silver rings to the state runner-ups and when I think about what I do now, I can look at the at that ring now and say, ‘I overcame things and odds people never thought we could,'" Butcher said., “When I look at this ring now, I say, ‘I can do this.' It’s helped make me who I am."