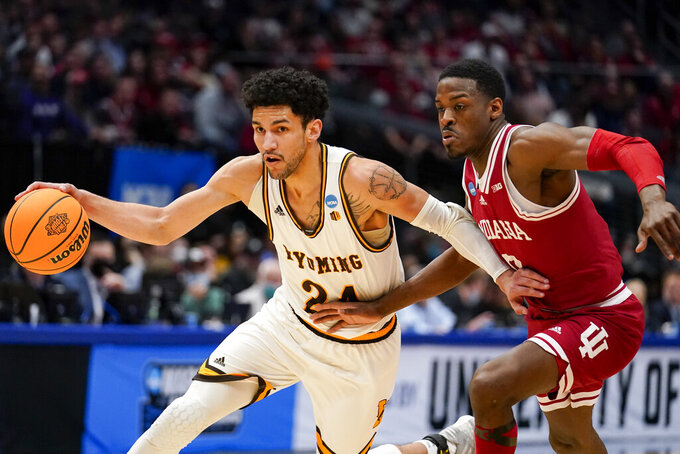 DAYTON, Ohio (AP) — University of Dayton Arena was rocking, thanks to hordes of Indiana fans who made the drive to the First Four to see the Hoosiers play in the NCAA Tournament for the first time since 2016.

The 13,400-seat newly renovated venue just got louder as Indiana pulled away late to cap a 66-58 win over turnover-prone Wyoming on Tuesday night, sending the 12th-seeded Hoosiers (21-13) to a first-round East regional game to face fifth-seeded St. Mary's on Thursday.

“I thought our defense was really the key when we were struggling offensively to make shots,” Indiana coach Mike Woodson said. “But we just kept grinding, and I found another player tonight off the bench and that was Geronimo, who gave us a major, major lift tonight. And Trayce was who he’s been pretty much all year.”

Indiana opened a 10-point lead over the Cowboys (25-9) with less than two minutes left. Wyoming’s Drake Jeffries hit a pair of foul shots to get the Cowboys within six with 14 seconds to go, but Jeffries had to foul Indiana’s Xavier Johnson, who hit a pair from the stripe to put it out of reach.

Hunter Maldonado paced the Cowboys with 21 points but turned the ball over 10 times. Graham Ike had 17 to go along with and nine rebounds. The Cowboys had 19 turnovers leading to 17 Indiana points.

“We were a team for most of the year up until the last two or three weeks where we were in the top 25 in the country in turnover percentage, but you know, (we) give that team 19 empty possessions when I thought for the most part we were getting the shots we wanted to get," Wyoming coach Jeff Linder said.

Both teams were firing away from the outside early on but not much was falling. Indiana led 30-25 lead at the half despite shooting just 32% and hitting 1 of 8 from 3-point range.

The Cowboys couldn't keep the handle, turning the ball over 13 times in the opening half, including seven by Maldonado. Wyoming didn’t shoot much better in the half, either, just 39%.

“I’ve seen traps and doubles all year, it wasn’t anything too special, but I tried to force it a little more than I probably should have," Maldonado said.

Wyoming: With an at-large bid from the Mountain West, the Cowboys hurt themselves with turnovers and shot 43.5%.

Indiana: Showed typical Big Ten aggressiveness in wearing down Wyoming as the second half went on and taking control despite less-than-stellar shooting. The Hoosiers shot 41.9%, but scored 46 points in the paint.

“Now they know what it feels like, what it feels like to play a Big Ten team,” Linder said. “They made a run in the Big Ten tournament and got some big players. But I'm really excited what the future has in store for us because we have most these guys coming back.”

The First Four returned to Dayton for the first time since 2019 with all the March Madness trimmings. UD Arena was filled to the rafters, mostly with the boisterous Indiana fans, but there was good representation by Wyoming fans also.

“It’s huge. It’s surreal,” said Jackson-Davis, a junior forward who leads Indiana in scoring. “This environment, even just for the First Four game it was a surreal environment. I’ve always dreamed about playing in this tournament and finally being able to live out that dream and just performing at the highest level, I’m truly grateful.”

an hour ago
By Dan Gelston 3 hrs ago
By Aaron Beard 13 hrs ago
By Richard J. Marcus 18 hrs ago
By Tommy Conmy 19 hrs ago