Injuries lead to inconsistency in Baylor slide from top spot 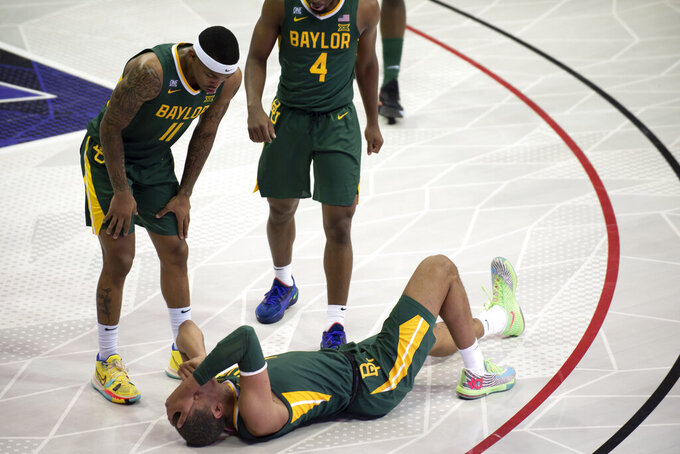 FILE - Baylor forward Jeremy Sochan, bottom, covers his face after getting injured on a play in the first half of an NCAA college basketball game against TCU in Fort Worth, Texas, Saturday, Jan. 8, 2022. Baylor has gotten banged up over the last month, going from the undefeated No. 1 team to 4-4 over its last eight games. (AP Photo/Emil Lippe, File)

Jeremy Sochan turned his left ankle and James Akinjo then fell hard on his tailbone. Adam Flagler has been bothered by a bruised knee and leading scorer LJ Cryer missed 10th-ranked Baylor's last three games because of an issue with his surgically repaired right foot.

The reigning national champion Bears (19-4, 7-3 Big 12) were the last undefeated team and No. 1 in the country before that rash of injuries to those key players. Baylor has since gone 4-4 the last eight games, the most recent being its most lopsided loss in nearly three years.

“We haven’t lost when we’ve had everybody,” coach Scott Drew said. “But having everybody, and practicing and being in a rhythm all go hand in hand as well."

The Bears have found it difficult to find a groove over the past month with injured players in and out of the lineup, and in and out of practice. That is also tough for those players to find a rhythm shooting and connecting with each other on the court.

“It’s a shame because we can’t really bring consistency to our game. We have a different lineup every game,” Sochan said. “But it’s no excuse. We can’t really blame that. ... You never know what’s going to happen, so we just have to keep on playing."

The Bears, who play at Kansas State on Wednesday night before hosting the Longhorns on Saturday, are coming off an 83-59 loss at Kansas. They led only after making the game's first basket, trailed by 17 points midway through the first half and were behind by as many as 34. It was their worst loss since a 25-point setback at Texas Tech on Feb. 16, 2019, a season that saw the Red Raiders reach the national title game.

“We got beat down at Kansas, like that’s a game we really wanted to win and would put us tied for first place,” senior Matthew Mayer said.

“Obviously all of us were embarrassed on how we performed on Saturday,” Drew said. “Usually, you have a game like that once or twice a year. We just haven’t had one like that, to that extent, in three years or so. Obviously, not fun, and hopefully something that we can make sure we’re not in a position like that again the rest of the year.”

Baylor was 15-0 after a 76-64 win at TCU on Jan. 8 when Sochan got hurt late in the first half. The ankle injury forced the standout freshman forward to miss four games, including the first consecutive home losses for the Bears since the end of the 2015-16 season.

Grad transfer guard and Big 12 assists leader Akinjo had a jarring fall the very next game, a 75-72 home loss to Texas Tech. Akinjo was in the starting lineup four days later, but was only 1-of-8 shooting and didn't play the final 10 minutes of that home loss to Oklahoma State because of lingering lower back pain. He sat two of the following three games.

Two of Baylor's four wins over the past month have been against West Virginia, part of six consecutive losses by the Mountaineers. Sochan and Akinjo missed the first of those meetings Jan. 18. Both were back for the rematch 13 days later, but the Bears were then without two of their top three scorers with Cryer and Flagler out of that game last week.

Cryer has averaged 13.9 points while starting only three of his 18 games. His playing time as a freshman was limited last season behind a talented trio of departed guards: All-American Jared Butler, Davion Mitchell and MaCio Teague. Cryer had surgery on his foot last summer, and been held out of the last two non-conference games for some extended rest.

Senior post player Flo Thamba, the only returning starter from Baylor's national championship team, and freshman Kendall Brown are the only Bears to start all 23 games this season. Jonathan Tchamwa Tchatchoua, the big man off the bench, is the only other one to play in every game.