Inside job: Michigan goes to the paint to top FSU 76-58 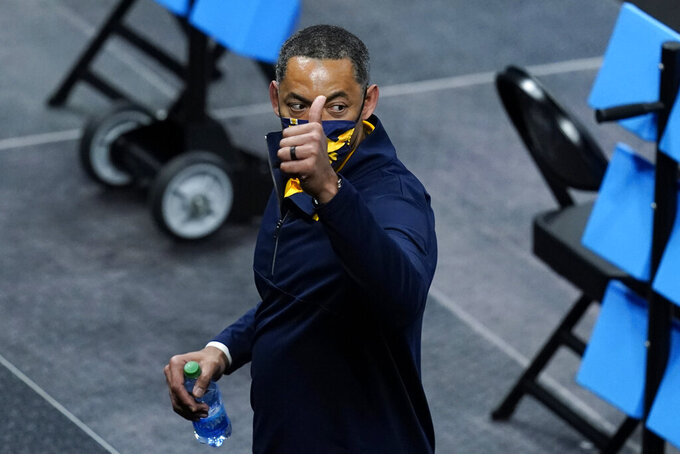 INDIANAPOLIS (AP) — What was touted as the marquee matchup in the Sweet 16 turned into a dud.

For everyone but Michigan, that is.

Seven-foot-1 freshman Hunter Dickinson had 14 points and eight rebounds and the top-seeded Wolverines took the inside route to the Elite Eight, pounding away in the paint Sunday for a 76-58 takedown of surprisingly helpless Florida State.

Franz Wagner had 13 points and 10 rebounds for Michigan. The Wolverines scored their first 30 points of the second half from close range to turn this game into a blowout and lead coach Juwan Howard and Co. to a victory in the only “chalk” meeting between a 1 and 4 seed of the second weekend.

Michigan (23-4) moved to a regional final for the first time since 2018 under John Beilein, whose departure a year later led to Howard's hiring. On Tuesday, the Wolverines will play 11th-seeded UCLA for a trip to the Final Four.

On Sunday, they decimated Florida State's inside defense. The evening's most telling stat was points in the paint: Michigan 50, Florida State 28.

“We basically knew how they were going to play us all game with fronting the post and switching everything,” Wagner said. “We knew what to expect and did that in practice. And I think we did a really good job of not allowing them to speed us up.”

The Wolverines created havoc on the other end, too.

They forced Florida State so off the mark that the Seminoles didn’t score their 20th point until M.J. Walker (10 points) hit a jumper with 27 seconds left in the first half.

Other lowlights for the Seminoles:

— 14 turnovers, including 10 in the first half that led to 16 Michigan points.

— No 3-pointers over the first 24 minutes, and only 5 of 20 for the game; four of the makes came from Malik Osborne, who led the Seminoles with 12 points.

— Foul trouble for Walker, Anthony Polite and RaiQuan Gray. Adding to the trouble, Walker, the team's leading scorer this season, rolled his ankle at the 14-minute mark of the second half. By the time he came back eight minutes later, the Seminoles (18-7) trailed by 19.

— The offense was held under 60 points for the first time this season, and it flashed about as much fluidity as coach Leonard Hamilton, who limped around on the sideline in a walking boot; he ruptured his Achilles tendon while stepping off the bus last week.

“I think they were the best version of Michigan tonight,” Hamilton said. “Even though I thought we could have played a little better, I’m not sure Michigan didn’t have a lot to do with our inability to play as well as we have sometimes.”

The Wolverines have big men in Dickinson and 6-9 Wagner, the likes of whom FSU hasn’t faced much, even as its long, athletic bunch took the program to its third straight Sweet 16.

Dickinson also blocked two shots. He was a constant presence underneath, forcing Florida State, the team listed by analytics guru Kenpom as having the tallest average height in the nation, to twist and turn and bend and force shots up from inside the paint.

And from outside? They won their first two March Madness games despite making a grand total of six 3-pointers. They'll leave Indy with 11, thanks mainly to Osborne, who was the only Seminole to make more than one in this blowout.

FSU went on a mini-tear when Osborne and Polite made back-to-back 3s to trim Michigan's lead to five early in the second half.

But Michigan scored the next seven points during a stretch that also included Walker's injury. The game never got that close again.

Driving the lane and making the extra pass underneath, the Wolverines made 11 of their first 13 shots in the second half. Seven of their 19 assists came from big men Dickinson (two) and Wagner (five).

The closing minutes were pretty much a Michigan party in the quarter-filled Bankers Life Fieldhouse, with the Wolverines fans shouting “Let's Go Blue” as the clock ticked down.

They are adjusting to life without injured guard Isaiah Livers — and becoming comfortable carrying the banner for the Big Ten, which brought nine teams to March Madness and now has only one.

A pretty good one, it turns out.

“Michigan's had a lot of success its basketball program,” said Howard, who went to three Elite Eights as a player in the Fab Five days. “It's beautiful to see all the hard work is paying off this year.”

Florida State freshman Scottie Barnes is projected as an NBA lottery pick if he chooses to go that route. He finished with eight points and three assists on 4-for-11 shooting.