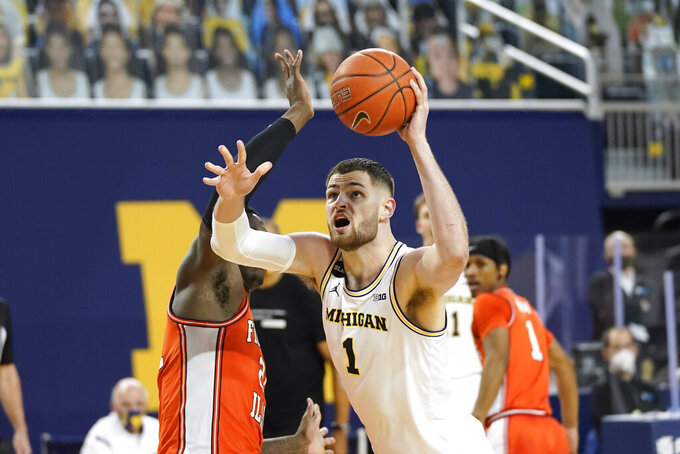 “We’re the hardest-playing team in the country. That’s our statement,” Frazier said. “Even without our best player, we’ve got a lot of guys on this team.”

Frazier led the way with 22 points, Curbelo scored 11 of his 17 in the first half, and the Illini dismantled No. 2 Michigan with a smothering defensive performance, routing the Wolverines 76-53 on Tuesday night.

Kofi Cockburn added 12 points for Illinois. Playing again without injured star Ayo Dosunmu, the Illini (19-6, 15-4 Big Ten) kept Michigan from clinching the conference title and boosted their own chances at a No. 1 seed in the NCAA Tournament.

“I would be challenged to find a better win in college basketball this year — a better road win anyway. I mean, in all the analytics, they're up there,” Illinois coach Brad Underwood said. “So I think it's got to make a pretty solid statement.”

Eli Brooks scored 11 points and was the only player in double figures for Michigan. The Wolverines (18-2, 13-2) looked physically overwhelmed for much of the night, unable to create good shots and unable to keep the Illini off the boards. It was an eye-opening blowout — especially since Michigan has rolled to similar margins of victory against other good teams this season.

Both teams had a hard time scoring in the first half, but Curbelo’s ability to drive to the basket helped Illinois to a 33-22 lead at the break. Then the Illini kept pouring it on.

“They played with great activity from the jump of the ball. They hit us first. We weren’t prepared,” Michigan’s Isaiah Livers said. “It felt like they were on a run the whole game.”

Illinois outscored Michigan 22-5 in second-chance points and held the Wolverines to 35% shooting from the field.

The Big Ten confirmed before the game that it will use winning percentage to determine the league champion. Michigan can still wrap that up with a win in either of its last two regular-season games — or if Illinois loses its last game this weekend.

Illinois: The Illini still have an uphill climb to win the Big Ten, but if they finish a game or two behind Michigan in the loss column, their fans will likely be heard from on the topic. The Wolverines are scheduled to play three fewer games than Illinois, and the size of this blowout — without Dosunmu — will resonate. Dosunmu has missed the past three games after breaking his nose, but the Illini have won them all. Underwood said Dosunmu has also been in concussion protocol.

Michigan: It’s only one game, and the Wolverines had been remarkably consistent in their dominance of the Big Ten this season — but Michigan looked so lacking in energy and offensive poise Tuesday that it will be interesting to see the team’s response later this week.

“We will learn from a loss like this, and the type of performance that we gave tonight was not acceptable at all,” coach Juwan Howard said. “We’re going to come in tomorrow, watch film and see what areas where we can improve on. It’s going to be, I call it a horror film.”

This game was originally supposed to be played Feb. 11, but it was moved after Michigan's athletic department paused for coronavirus-related reasons. The Illini didn't go into too much detail about whether that — or the fact that Michigan is in position to win the Big Ten while playing fewer games — was a motivator, but they certainly seemed charged up for this one. The Illinois bench was noisy throughout, and with good reason.

“Obviously the past month, with everything going on between the two teams, we wanted to come in with a chip on our shoulder," Frazier said. "The energy tonight was incredible. It was so special out there tonight.”

This is a tricky one to evaluate. Michigan may drop behind No. 3 Baylor. Illinois could certainly pass Michigan as well after this game, but the Illini still have four more losses than the Wolverines. Plus, both Michigan and Illinois have more tests to come before the next poll.

Illinois: The Illini play at No. 7 Ohio State on Saturday.