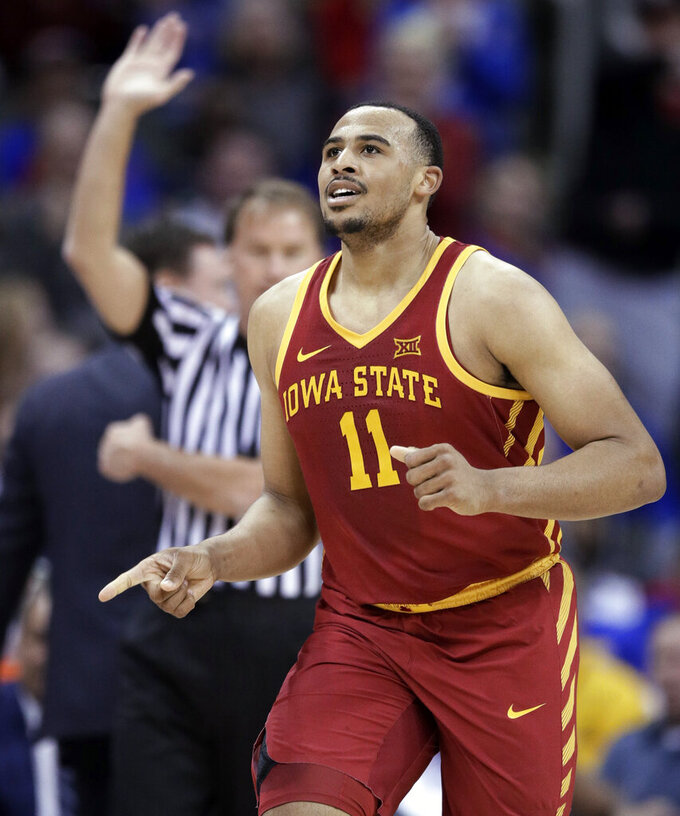 Iowa State guard Talen Horton-Tucker (11) celebrates a basket during the first half of the team's NCAA college basketball game against Kansas in the final of the Big 12 men's tournament in Kansas City, Mo., Saturday, March 16, 2019. (AP Photo/Orlin Wagner) 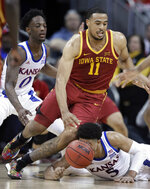 KANSAS CITY, Mo. (AP) — Lindell Wigginton found his way to Iowa State from Canada, Marial Shayok took a detour through the University of Virginia, and Michael Jacobson started his career at the University of Nebraska.

Three players from three very different backgrounds now have something in common: a title.

The trio helped the fifth-seeded Cyclones race to a big early lead against No. 17 Kansas on Saturday night, then contributed to enough crucial stops down the stretch, preserving a 78-66 victory over the Jayhawks in the Big 12 Tournament finale at Sprint Center.

"When you do something special, you win a championship, you got a connection for the rest of your life," said Cyclones coach Steve Prohm, who brought together his team from far and wide.

"Hopefully this is just step one. We'll enjoy this for a while, figure out where we're going for the NCAA Tournament and then we'll focus on that."

Wigginton finished with 17 points, Shayok had 15 on his way to winning tournament MVP, and Jacobson finished with 14 for the Cyclones (23-11), who became the lowest-seeded team ever to win the conference tournament. They also improved to 2-0 against Kansas (25-9) in the finals.

"I think it was our best team win of the year because it was gritty," said Shayok, who like Jacobson sat out last season after transferring. "Everybody stepped up."

Dedric Lawson had 18 points and Devon Dotson added 17 for the third-seeded Jayhawks, whose last chance to win some hardware will be the NCAA Tournament. Their run of 14 consecutive regular-season crowns ended last weekend, and they failed to defend their Big 12 Tournament title.

"The way we competed, we showed some signs where we really wanted to win this game," Dotson said. "But they hit some tough shots. We were missing some of our easy shots we usually make."

Meanwhile, the Cyclones made a tremendous about-face during their stay in Kansas City.

They arrived having lost five of their last six regular-season games, and looked rudderless in losses to Texas and lowly West Virginia. But beginning with a blowout of Baylor and continuing with a quarterfinal win over regular-season champ Kansas State, the Cyclones found their stride.

The Jayhawks, still looking for their own, were fortunate to trail 32-22 at halftime.

Lawson, who had 24 points in the semifinals, was 2 of 11 from the field. Marcus Garrett was 0 for 6 from the floor and 1 of 4 from the foul line. Quentin Grimes was 0 or 4 from beyond the arc after hitting five 3-pointers in their win over the Mountaineers on Friday night.

All told, the Jayhawks shot 27.8 percent from the field and missed all nine of their 3-point attempts in the first half. They also were just 2 of 8 from the free-throw line.

"Just one of those nights," Grimes said. "Every one of the shots we put up was a good shot."

Iowa State had its own trouble on the offensive end of the floor, getting five shots swatted into the seats. But the Cyclones were effective at getting to the rim, and easy layups by Wigginton and Tyrese Haliburton allowed them to take control.

Their lead swelled to 41-24 early in the second half. And even when the Jayhawks managed to nip into it, they would inevitably miss an open layup or throw the ball away.

Or, Jacobson would knock down an unlikely 3-pointer.

That was the case when the Jayhawks trimmed the deficit to 45-35 with 14 minutes to go. Iowa State's big man calmly drained one from the top of the arc — all Kansas coach Bill Self could do was smile in disbelief — and Steve Prohm's squad promptly ripped off seven straight points.

"We just didn't make those plays that you need in order to put some real game pressure on them," Self said. "They were better than us, make no mistake."

Frustration eventually set in for the Jayhawks down the stretch.

After cutting their deficit to single-digits on several occasions, including 72-63 with 1:21 to go, the Cyclones kept answering. And after Grimes was called for a foul on Wigginton, Lawson spiked the ball under the basket and was whistled for a technical foul.

Shayok made the two technical foul shots, Wigginton made two more, and the chants of "Let's Go Cyclones!" began to reverberate throughout Sprint Center in celebration of another title.

"This is a special night. Kansas is a tremendous program," Prohm said, "and you can talk about Coach Self forever. But our guys answered the bell We came down here and won each game in different ways. We showed our toughness. We showed our togetherness.

Iowa State has leaned on Shayok and Talen Horton-Tucker much of the season, but Wigginton and Haliburton shined in Kansas City. Wigginton is averaging more than 15 points over his last five games while Haliburton continues to lead the Big 12 in assist-to-turnover ratio.

Kansas started freshman center David McCormack, but the Cyclones' guard-oriented lineup forced the Jayhawks to match their personnel. Charlie Moore and the rest of their guards struggled shooting the ball, and they were unable to get crucial defensive stops down the stretch.

Both teams will learn their NCAA Tournament destinations Sunday.