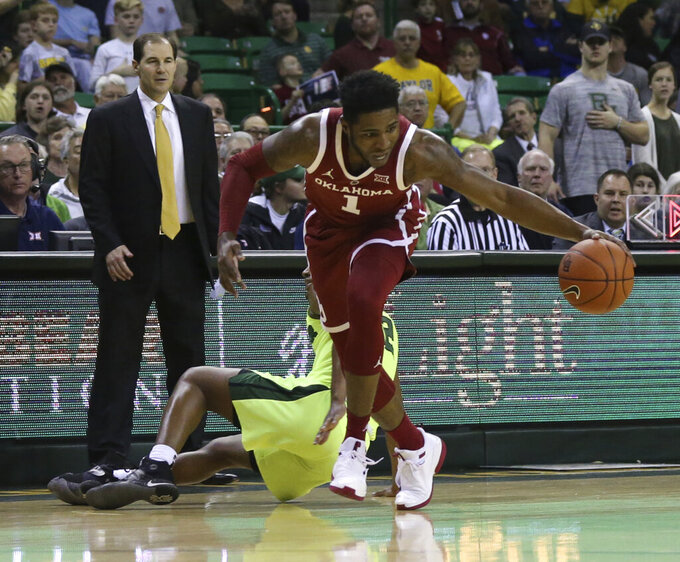 Oklahoma guard Rashard Odomes (1) comes up with a steal over Baylor guard Jared Butler (12) in the first half of an NCAA college basketball game, Monday, Feb. 11, 2019, in Waco, Texas. (Rod Aydelotte/Waco Tribune-Herald via AP) 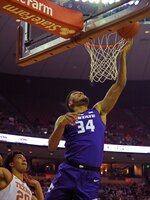 GAME OF THE WEEKEND: Iowa State at Kansas State. The Wildcats moved to 9-2 in the league with a 71-64 win at Texas on Tuesday night, and a victory over the Cyclones would put K-State three games ahead of them with six games to play — in addition to a series sweep. Iowa State lost to the Wildcats 58-57 at home last month on a buzzer beater by Barry Brown. That loss, which seemed like an upset at the time, could turn out to be a dagger for the Cyclones if they can't steal one on the road in Manhattan.

LOOKING AHEAD: Baylor, which held off Oklahoma 59-53 in Waco on Monday night, hosts Texas Tech on Saturday. The Bears, like Iowa State, are 7-4 in conference games. ... Kansas hosts West Virginia. The struggling Mountaineers will be short-handed the rest of the way after starters Esa Ahmad and Wes Harris were kicked off the team for undisclosed violations. ... Texas will look to rebound when it hosts Oklahoma State, and TCU hosts Oklahoma. The Horned Frogs stunned the Cyclones 92-83 in Ames on Saturday before falling to Kansas at home on Monday night.

PLAYER TO WATCH: Kristian Doolittle, Oklahoma. The junior forward has done his best to keep the scuffling Sooners afloat, surpassing his season average of 9.4 points four times in Oklahoma's five-game losing streak. The Sooners' NCAA Tournament hopes have sunk in recent weeks, but if Doolittle can keep improving they've got a chance to turn things around. Doolittle scored 14 points on 7 of 15 shooting in the loss to Baylor.

INSIDE THE NUMBERS: The race for the scoring title is a dead heat heading into the weekend, with Dedric Lawson of Kansas and Marial Shayok of Iowa State tied at 19.4 points per game. Lawson is at 50.6 percent shooting, while Shayok is at 50.2. But Shayok, a senior transfer from Virginia whose previous career high was 8.9 points a game, is shooting 87.8 percent from the line. ... Lindy Waters of Oklahoma State entered Wednesday's game against Texas Tech shooting 95 percent on free throws. Waters hit 57 of his first 60 from the line this season. ...Brown's two steals per game leads the league.

ON WOMEN'S SIDE: No. 1 Baylor was the top overall seed in the selection committee's initial reveal of the top 16 overall seeds for the NCAA tournament on Monday. Iowa State was 15th, meaning the Cyclones are also in line to host first and second-round games. ... Cyclones center Kristin Scott led the league in field goal percentage (63.8) and 3-point percentage (48.5) heading into the weekend.