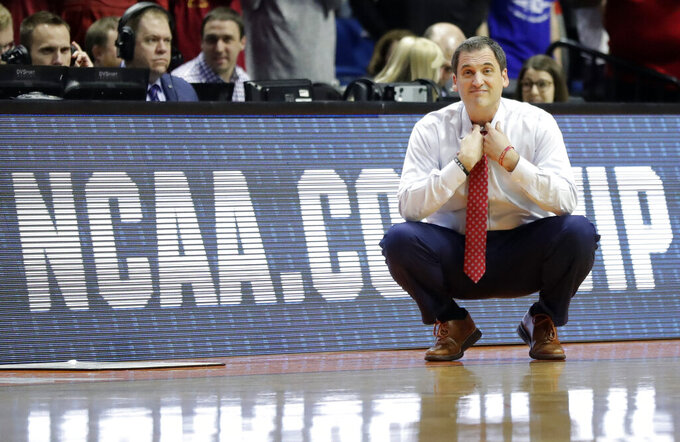 Iowa State head coach Steve Prohm is seen on the sidelines during the second half of a first round men's college basketball game against Ohio State in the NCAA Tournament Friday, March 22, 2019, in Tulsa, Okla. Ohio State won 62-59. (AP Photo/Jeff Roberson)

AMES, Iowa (AP) — Iowa State and coach Steve Prohm have agreed to a three-year contract extension through the 2024-25 season.

The Cyclones announced the deal on Tuesday, ending speculation that Prohm might leave for Alabama, his alma mater. The Crimson Tide and Avery Johnson recently agreed to part ways after four seasons.

"The support of the school administration has been great and what more can be said about the fan base," Prohm said.

Prohm has taken Iowa State to three NCAA Tournaments in four seasons since taking over for Fred Hoiberg. The Cyclones finished 23-12 this season, winning the Big 12 tournament for the second time under Prohm before losing to Ohio State in the NCAA Tournament on Friday.

Prohm is 83-53 at Iowa State. He's won at least 20 games in seven of his eight seasons as a head coach. Prohm's overall winning percentage, which includes his time at Murray State, is .695.

The financial details of Prohm's extension weren't immediately disclosed. The Cyclones said those will be available once the new contract is finalized.

"Whether we're playing in Hilton Coliseum, Maui, Kansas City or Tulsa, you can count on amazing support," Prohm said. "I have one of the elite college jobs in the nation. My family has really settled in Ames, and we want to be here a long time."

Iowa State has a chance to be one of the better teams in the Big 12 next season despite losing seniors Marial Shayok and Nick Weiler-Babb. Sophomore Lindell Wigginton and freshman Talen Horton-Tucker may consider the NBA Draft.

Even if they leave, the Cyclones should have a solid core built around Tyrese Haliburton, Michael Jacobson, Solomon Young and Colorado State transfer Prentiss Nixon.

However, Iowa State will be without reserve forward Cam Lard. Prohm announced Tuesday that Lard will be leaving the program after two up-and-down seasons in Ames.