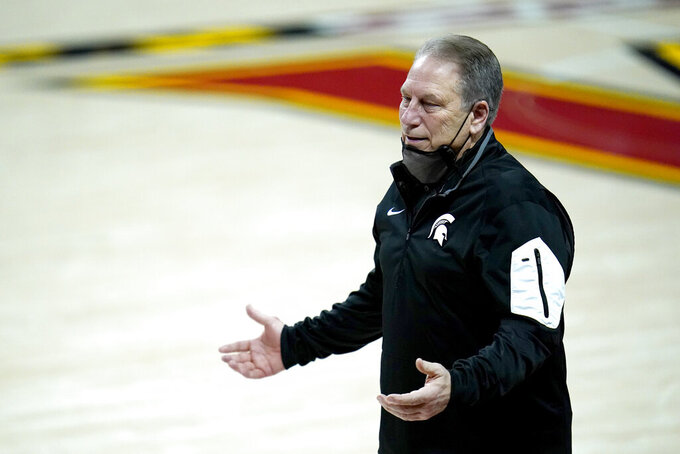 Michigan State has gone from the top tier of the AP Top 25 poll to desperately trying to bolster a shaky NCAA Tournament resume.

The Spartans helped themselves in the past week, beating fifth-ranked Illinois on Tuesday and No. 4 Ohio State two days later. Throw in the previous weekend’s win at Indiana, and the Spartans earned three Quadrant 1 wins – headliners on any tournament resume – after having one all season.

“We’re not safe in anything yet,” coach Tom Izzo said after Ohio State win. “We haven’t accomplished anything yet. But we did accomplish that we can get up off the mat. Now, can we sustain being off the mat?”

To Izzo's point, the Spartans missed a chance to help themselves even more with Sunday’s 73-55 loss at Maryland, which began with the Spartans falling behind 11-0 in a start that irritated Izzo because of what he called “standing around.”

As of midday Sunday, the Illinois and Ohio State wins were enough to have the Spartans (13-10, 7-10 Big Ten, No. 68 NET) sneaking in as a No. 12 seed in BracketMatrix.com’s average of 104 tournament projections, appearing in 52 mock brackets for the 68-team field before the Maryland loss.

They're in danger of missing the NCAAs for the first time since the 1996-97 season, Izzo’s second year after taking over for Jud Heathcote.

After spending two weeks at No. 4 nationally in December, Michigan State started 2-7 in league play and was unranked by mid-January. Things got worse with a 30-point loss against No. 9 Iowa and then a loss at Purdue.

The Indiana, Illinois and Ohio State wins helped push the Spartans to 4-9 in Quadrant 1 games. Michigan State hosts the Hoosiers on Tuesday then closes with consecutive games against third-ranked Michigan.

“A lot of times if you go out there thinking about what's on the line or at stake, it kind of hinders you as a player,” graduate guard Joshua Langford said after the Maryland loss. “It's almost like paralysis by analysis, so we just have to go out there and control what we can control and then let the chips fall where they may.”

North Carolina: The Tar Heels had won nine of 12 before a surprising home loss to Marquette, but they followed with Saturday’s upset of No. 11 Florida State. The Tar Heels (15-8, 9-5 ACC, No. 42 NET) rallied from 16 down to earn a second Quadrant 1 victory and can get another with Monday’s trip to Syracuse (No. 55 NET).

Xavier: The Musketeers (13-5, 6-5 Big East, No. 48 NET) have been hovering near the cut line in many projections and helped themselves by beating No. 13 Creighton on Saturday for a second Quadrant 1 victory. Xavier is a No. 12 seed in BracketMatrix’s projections.

Duke: This is less about trajectory and more about the Blue Devils' small margin for error. Duke (11-9, 9-7, No. 58 NET) had won four straight, including a win against then-No. 7 Virginia, but lost at home Saturday to Louisville and sits at 1-3 in Quadrant 1 games entering trips to Georgia Tech and rival UNC.

Indiana: The Hoosiers (12-12, 7-10 Big Ten, No. 59 NET) have lost three straight, including Saturday against Michigan with a chance to help a resume featuring a 2-9 record in Quadrant 1 games.

Richmond: The Spiders (13-6, 6-4 Atlantic 10, No. 53 NET) missed a chance for a fourth Quadrant 1 win at Saint Louis on Friday. That left Richmond falling short in projections by ESPN (first four out) as well as BracketMatrix (appearing on 14 of 104 mock brackets).