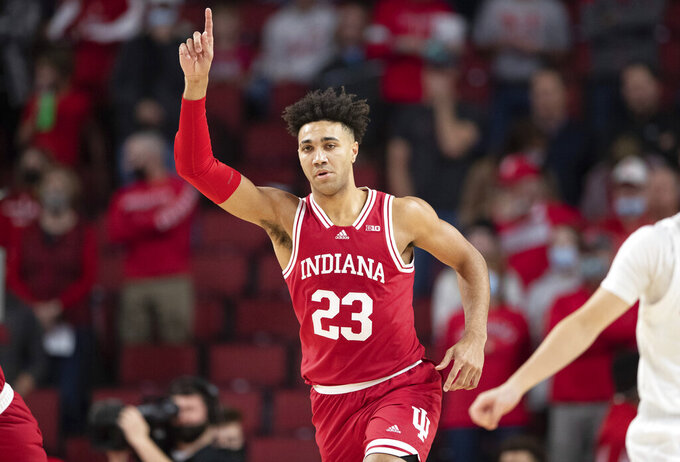 Indiana's Trayce Jackson-Davis (23) reacts after making a basket against Nebraska during the first half of an NCAA college basketball game Monday, Jan. 17, 2022, in Lincoln, Neb. (AP Photo/Rebecca S. Gratz)

LINCOLN, Neb. (AP) — Trayce Jackson-Davis had 23 points and 12 rebounds for his fourth straight double-double and Indiana defeated Nebraska 78-71 on Monday night, a rare road win for the Hoosiers.

The win was the first on the road for the Hoosiers, who had lost their first four road games this season and eight in a row dating to last season.

Indiana never trailed but the Hoosiers' lead was just 59-55 with 10:31 to go. Jackson-Davis scored the next six points and the Hoosiers matched their largest lead of the game at 65-55.

Nebraska was never down by more than 10 points but in the final 10 minutes the Cornhuskers did not get closer than six until Alonzo Verge Jr. made a layup with five seconds left to make it 76-71. Indiana's Xavier Johnson added two free throws for the final margin.

Indiana, which had struggled with ball control recently and had 23 turnovers in last week’s loss to Iowa, had only seven turnovers with about 10 minutes to go but finished with 14 giveaways to Nebraska’s 13.

Nebraska has lost 11 of its last 12 games, a skid that began with a 104-100 four-overtime loss at North Carolina State on Dec. 1. The Cornhuskers only win in the last seven weeks was 88-74 over Kennesaw State on Dec. 23.