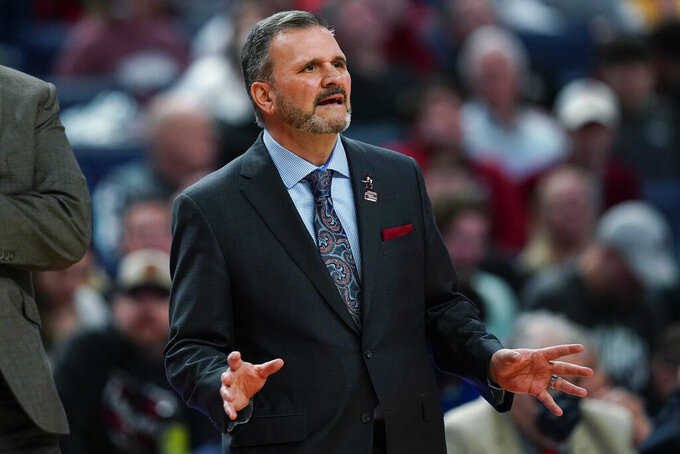 New Mexico State coach Chris Jans watches during the first half of the team's college basketball game against Arkansas in the second round of the NCAA men's tournament Saturday, March 19, 2022, in Buffalo, N.Y. (AP Photo/Frank Franklin II)

STARKVILLE, Miss. (AP) — Chris Jans leaned down to pick up a cowbell and rang it during his introduction as Mississippi State's basketball coach. It's an MSU sports tradition he acknowledged struggling with upon getting off the plane.

He plans to get better at it by ringing up more wins with the Bulldogs.

Jans was introduced Wednesday and vowed his program will play with confidence and swagger. While that depends on which players stay, who arrives via the transfer portal and recruiting, he’s intent on transforming MSU from its current state of mediocrity and into a NCAA Tournament regular.

“This is a dream opportunity for me,” said Jans, who was hired on Sunday, a day after guiding New Mexico State to the second round of the NCAA Tournament. “I’ve been coaching for 30 years and when I started this odyssey, I wanted to be in a place like Mississippi State.

“I didn’t dream of being at Mississippi State. I didn’t really have a dream job. I just wanted to be somewhere where it was important and we were on the biggest stage, we’re competing with and against the best players in college basketball and the best coaches in college basketball. And obviously in the SEC and at Mississippi State, we’re going to get the opportunity to do that.”

Jans, 52, received a four-year contract with a base salary of $2.4 million for 2022-23 and up to $650,000 in performance incentives. He led the 12th-seeded Aggies to a first-round upset of No. 5 Connecticut before falling to No. 4 Arkansas, a team he’ll see often in the Southeastern Conference. He brings in a career head coaching record of 143-44 including 122-32 in five seasons at NMSU with three Western Athletic Conference Tournament championships.

MSU’s 2019 NCAA appearance was the only one in seven seasons under veteran Ben Howland, who departed last week. The Bulldogs were 134-98 during his tenure with three NIT berths the past four years including this season. But since a fourth-place SEC finish in the 2019-20 season halted before the tournament by the coronavirus outbreak, they never got above ninth and finished 18-16 in 10th this season.

Athletic director John Cohen said tremendous interest in the job made it important to move quickly to find Howland’s replacement. Jans checked off all the qualities he sought, his impressive record being the most obvious.

“Coach Jans is a proven leader and a proven winner,” Cohen said. “He’s considered by many industry experts to be one of the elite coaches in the entire country. His overall résumé really speaks for itself.”

Jans met with half of his roster earlier this week before severe weather postponed a meeting with other players. The Fairbank, Iowa, native didn’t promise a style, but the Aggies’ ability to hold Arkansas’ high-octane offense to season lows in scoring and shooting (28%) in the 53-48 West Region loss suggests his teams won’t be awed.

Jans’ arrival follows MSU’s March 12 hiring of longtime Louisville assistant Sam Purcell as women’s basketball coach. He will take over the program when the top-seeded Cardinals are finished in the women’s NCAA Tournament.