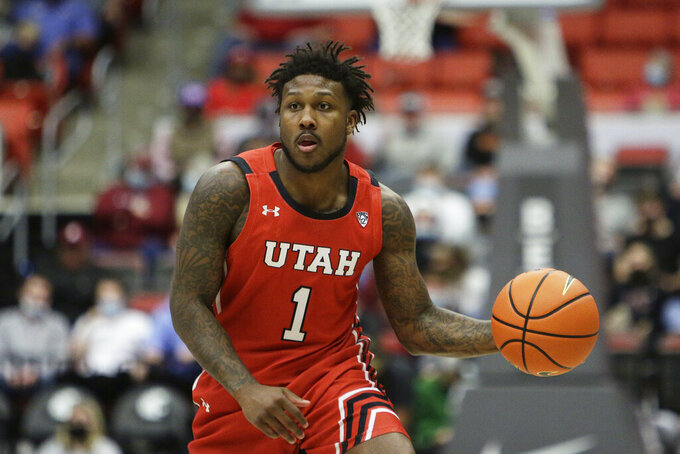 FILE - Utah guard David Jenkins Jr. controls the ball during the second half of an NCAA college basketball game against Washington State, Jan. 26, 2022, in Pullman, Wash. David Jenkins Jr. wanted to close out his college basketball career at a school where he would be pushed. He chose Purdue. Turns out the young Boilermakers may benefit most from the sixth-year senior's long journey to West Lafayette. (AP Photo/Young Kwak, File)

David Jenkins Jr. made a checklist for what he wanted on his final stop on a six-state basketball journey: face top competition, find a new challenge, play for a coach with an impeccable resume and experience something completely different.

Purdue filled all of those desires and the Boilermakers are ready to start this season with a well-traveled 6-foot-1 guard.

“It was a hard decision because it’s out of my comfort zone,” said Jenkins, who calls Las Vegas home. “I could have gone somewhere close, but I think you're more successful when you step out of your comfort zone. And it’s an easier transition when you have guys who are humble with low egos and coaches who care."

Getting acclimated to new teammates, new coaches and a new environment has become old hat for this 24-year-old.

After attending high school in Washington state and prep school in Kansas, Jenkins started his college career at South Dakota State. Two years later, he was off to UNLV, where he earned a bachelor's degree in communications. He relocated to Utah last season and will pursue a master's degree in West Lafayette, Indiana.

Through it all, Jenkins has had just about every conceivable basketball experience.

He appeared in the NCAA Tournament after being selected the 2017-18 Summit League freshman of the year and breaking the Jackrabbits' freshman scoring record (565 points). He averaged 19.7 points on South Dakota State's NIT-bound team as a sophomore.

Jenkins sat out the next season because of the NCAA's old transfer rules, but earned third-team all-conference honors at UNLV all while enduring back-to-back losing seasons with the Runnin' Rebels (12-15 in 2020-21) and Utes (11-20 in 2021-22).

Jenkins enters this season with a career average of 14.9 points. He has 323 3-pointers, a 41.3% shooting percentage beyond the arc and is 133 points away from joining the 2,000-point club — albeit on four different campuses.

Here, though, Jenkins is finding a home in a new role.

After starting 83 of 125 games, he's expected to provide depth behind Purdue's highly touted freshman backcourt of Fletcher Loyer and Braden Smith, and brings the kind of voice and perspective few can match on this young roster. The Boilermakers open play Tuesday against Milwaukee.

“He knows a lot but obviously he doesn’t know how Purdue does it — though he’s doing a good job picking that up,” fourth-year guard Brandon Newman said. “He brings toughness at the point guard spot. Everybody knows he can shoot the ball. He’s an older guy so he should be vocal, he should be helping out younger guys, inexperienced guys.”

That may be the biggest benefit for Purdue, which has three new starters and only five players who appeared in 10 or more games last season. But coach Matt Painter is not changing the expectations for his team, which has three Big Ten regular-season titles, one tourney title and a reputation for being an annual conference contender and Top 25 regular over the past decade. =

Painter views Jenkins as a versatile piece, capable of contributing on and off the court who can provide a stabilizing presence if and when things get tough. Plus, he has a penchant for making big shots, even game-winning shots.

“I really like someone who’s played a lot of games,” Painter said. “He’s put the ball in the basket, and he’s had a lot of different experiences — he’s been at four schools in six years, and I think he’s really going to help us and give us that scoring punch.”

“It’s just my personality to talk and be a part of it,” Jenkins said. “Obviously, I’m old so I’ve been a part of every team ever. I’ve also seen the good side of it, when teams are really good and the chemistry and camaraderie you have. You’re so connected on and off the court, I think that carries over on the court. It’s essential to being on a really good team.”

He also prides himself on some of the traits Boilermakers fans embrace — diving for loose balls, playing defense, excelling at multiple positions and eagerly lacing up his sneakers in front of the Mackey Arena faithful.

But there's one other reason Jenkins picked Purdue.

“I really feel like I can win a national championship here and that’s something I want to be a part of,” he said. “Learning from someone like (Painter) I think can really help me with my future endeavors and guys with low egos and I just felt that was something I wanted to be part of.”