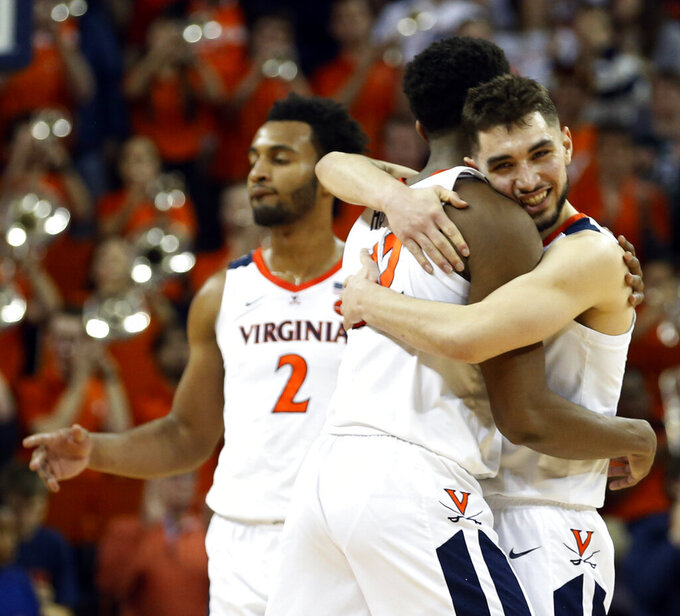 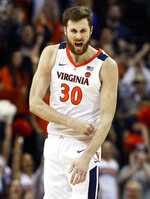 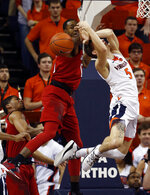 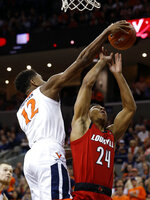 CHARLOTTESVILLE, Va. (AP) — Four Atlantic Coast Conference regular-season titles in six years might make it seem like old hat at No. 2 Virginia, but after the Cavaliers earned that fourth one by coming back to beat Louisville 73-68 on Saturday, Ty Jerome said it was time to celebrate.

Even if the ACC Tournament still beckons, followed by pursuit of the school's first national championship.

"You can't take this for granted," Jerome said after the Cavaliers cut down the nets with most of the 14,000-plus fans remaining in John Paul Jones Arena and cheering each snip. "Like coach (Tony) Bennett said, over an 18-game stretch to only lose two games, you can't take that for granted. You have to be thankful for that, but we've got to stay humble and we have to know what we're still trying to do."

Jerome scored 24 points, including the go-ahead free throw with 5:34 remaining, as the Cavaliers rallied for their eighth straight win.

They will head to Charlotte, North Carolina, as the top seed and with a double-bye. No. 3 North Carolina tied for the top spot when it beat No. 4 Duke on Saturday night, but the Cavaliers had the tiebreaker for the seeding by virtue of their 69-61 victory at UNC on Feb. 11.

"Now we've just got to get back in the gym and work really hard and get into an extra gear going forward," Jerome said.

Kyle Guy added 13 points and Jay Huff also made huge contributions at both ends for Virginia (28-2, 16-2), which has now won or shared the ACC title nine times in its history. Guy said the way the Cardinals made them fight for it can only bode well for Virginia going forward.

"We're in 40-minute territory and it really showed tonight. I think there's no better way to prepare us for what we're about to get into and this gauntlet that we're about to start," he said. Virginia has trailed in three of its last five second halves and came back to win each time.

Jordan Nwora scored 19 and Malik Williams 12 for the Cardinals (19-12, 10-8), who lost their ninth in a row in the series and for the sixth time in the last eight games under first-year coach Chris Mack. The Cardinals missed nine of their last 11 shots.

"We put ourselves in position to win the game and I think their composure versus our composure in the last 3, 4 minutes probably decided the game," Mack said. "They looked like a team that's been there before."

Louisville used a 20-4 run spanning the half to open a 47-40 lead early in the second half, quieting the sellout crowd until Virginia immediately scored seven straight to tie it. The game was tied at 49 when Louisville scored six in a row to go back ahead, and the lead flip-flopped until Jerome followed a three-point play by Christen Cunningham by making a pair of free throws.

That put Virginia ahead 63-62 and when Louisville turned the ball over on its next possession, Jerome found Huff free at the top of the key for his second 3-pointer. Huff also had two steals and a block during the rally, and Guy and Braxton Key hit 3-pointers.

Virginia honored its lone senior, center Jack Salt, before the game, but he might not be the only player the Cavaliers lose.

De'Andre Hunter, a 6-foot-7 redshirt sophomore guard, has been mentioned as a potential NBA lottery pick, and Jerome, a 6-5 junior with NBA 3-point range, could also be considering leaving after the season, though Jerome wasn't letting on afterward.

"I just try to block it all out," he said of whether his thoughts about his own future caused him to savor the moment a little more. "Coach Bennett always says that tomorrow has enough problems. Just focus on today and never surrender to the little things."

Louisville: The Cardinals managed just 52 points in their 12-point loss to Virginia on Feb. 23, but offensive bursts by Williams (seven points early) and Nwora (10 in the last 8:33) had them within 36-33 at halftime. Nwora scored eight of Louisville's 10 during a 10-3 run that briefly gave them a 27-26 lead with 6:06 remaining. ... The Cardinals also outscored Virginia 20-16 in the paint after being outscored there 38-4 in their home loss to the Cavaliers.

Virginia: Huff has a huge offensive upside and is a fan favorite at Virginia, but his defensive liabilities have limited his playing time in the past. Lately, he's grasping Bennett's Pack-Line defense better, working as a rim protector and getting critical playing time.

"He's just playing with a high level of confidence," Guy said of the 7-foot-1 Huff.

Louisville: The Cardinals will await their opponent in the ACC Tournament.

Virginia: The Cavaliers have byes through the first two rounds of the ACC Tournament.