Job in jeopardy, Gophers' Pitino 'not waving the white flag' 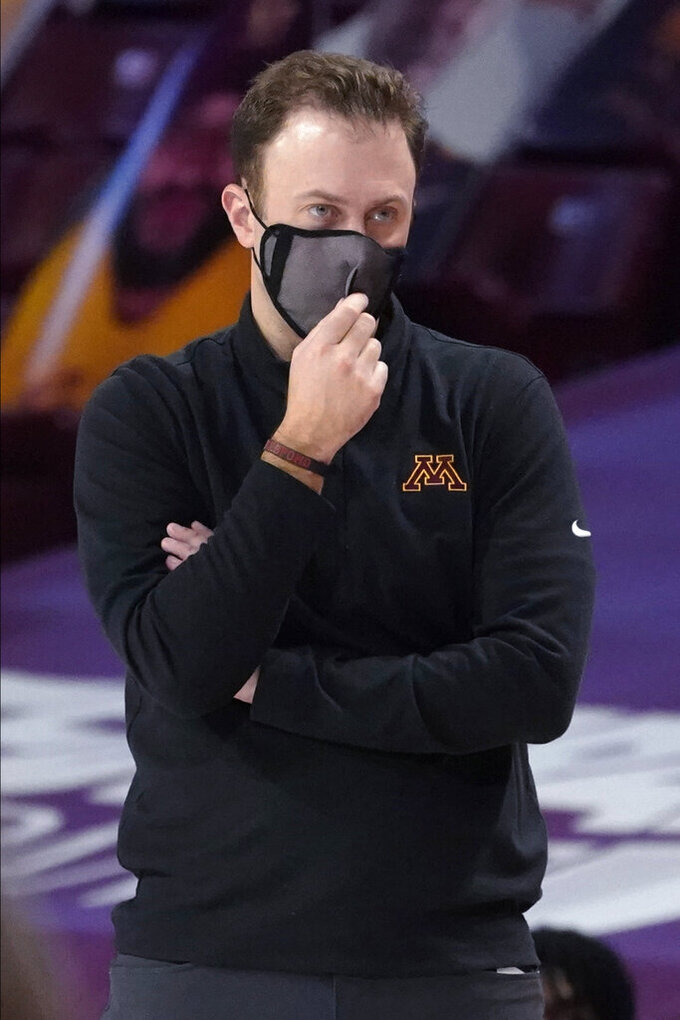 MINNEAPOLIS (AP) — Minnesota coach Richard Pitino acknowledged his job is in jeopardy with the Gophers going through another late-season fade, but he said he doesn't believe his fate has been determined.

The banged-up Gophers have lost eight of their last 10 games after beating now-No. 2 Michigan, the only loss for the Wolverines. Pitino, in his eighth year with the program, has twice taken Minnesota to the NCAA Tournament, but last month he watched a prime opportunity for a third bid fizzle badly.

Speaking Tuesday on a regularly scheduled video conference call with reporters, Pitino said he fully understood his place on the proverbial hot seat with speculation about his status on high alert.

“It’s part of the profession. Of course it’s hard. Now, my kids are young enough that they don’t see it, but of course it’s hard,” Pitino said. “But we’re not done yet. We’re not waving the white flag by any means. Yeah, we’ve had a couple bad days, and what do you do? You go to bed, wake up, dust yourself off and get back to work.”

The Gophers (13-12, 6-12) play Wednesday at Penn State and Saturday against Rutgers and would need to win those games and multiple games in Indianapolis in the Big Ten Tournament to work their way back onto the bubble.

Athletic director Mark Coyle, in a radio interview Tuesday with WCCO-AM, declined to directly answer a question about whether he'd decided if Pitino will return for 2021-22.

“I think you have to look at the entire body of work in the season,” Coyle said, later adding: "We’re going to do everything we can to support Richard and that team with these final two regular-season games and then make a good run down in Indianapolis.”

With the steep drop in revenue during the pandemic that prevented tickets being sold to athletic contests on campus this school year, paying a seven-figure buyout to get rid of a coach would likely be a tougher sell than usual to university leaders.

“Our goal is always to make the best long-term decision for the institution and the athletic program, so we’ll have to weigh in all the factors as we look at all our coaching positions,” Coyle said.

The Gophers are 9-25 in February and March regular-season games over the last four years. They're currently playing without guard Gabe Kalscheur (broken finger) and center Liam Robbins (sprained ankle), their two best defenders and second- and third-leading scorers, with no promise of either player returning in time to help stop the slide. The team's struggles began before they were hurt, though, a perplexing development after earlier victories over Iowa, Ohio State and Michigan, all ranked in the top seven of the latest Associated Press poll.

“When this team was healthy, we were a pretty good team," Pitino said.

He said he's in salvage mode, not surrender.

“I don’t really think a whole lot more than that. Maybe it pops up in my mind, and I tell it to go away and I just think about today, you know? So that’s the main focus, and that’s always going to be the focus — pouring our heart and soul into the opportunity we have every single day,” he said.

The 38-year-old Pitino said he's long had a strong relationship with Coyle, who was hired three years into Pitino's tenure.