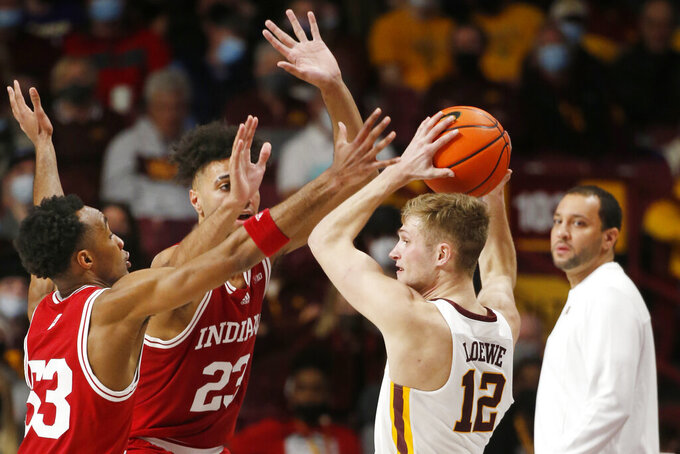 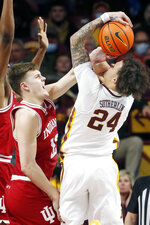 The Golden Gophers fought back after a poor start to the second half. A 16-2 run in which they made all six of their shots brought them within 74-67 near the 3-minute mark. Indiana did not score a field goal in the final 3:30 but converted 10 free throws in 13 attempts. The Hoosiers finished 14 of 20 from the line.

Minnesota came out firing unsuccessfully from 3-point range in the second half and made only 1 of 5 in the first six minutes, while the Hoosiers pushed their lead to 53-36. When Minnesota finally made its second shot after halftime the Golden Gophers were 2-of-11 shooting and had been outscored 23-7.

Payton Willis scored 28 points and made 7 of 14 3-pointers for Minnesota. He also had seven assists. E.J. Stephens scored 14 points and his 3-pointer drew the Gophers within 82-79 with 5 seconds remaining before Johnson closed it out with a pair of free throws.

A 13-3 run gave Indiana a 27-15 lead midway through the first half. Battle and Willis warmed up from 3-point range, making two each to keep Minnesota within 40-33 at halftime. Johnson led Indiana with 16 first-half points, making 4 of 6 3-pointers. Minnesota finished with 14 3-pointers to Indiana's 10.

Johnson backed up his performance in Indiana's last game, against Maryland. He scored a season-high 24 points against the Terrapins, making all of his field-goal attempts, including three 3-pointers. Against Minnesota, he made four 3-pointers, grabbed six rebounds and had eight assists.