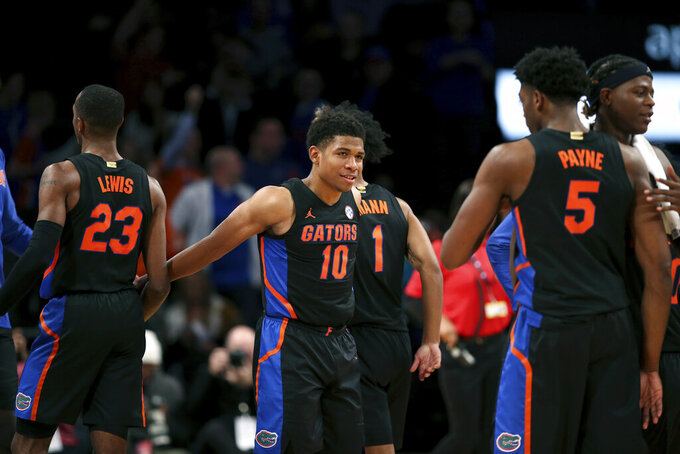 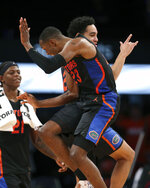 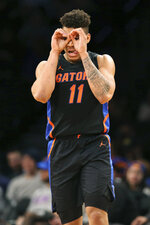 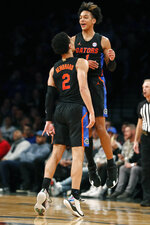 NEW YORK (AP) — For the better part of two hours, Mike White had witnessed the kind of outclassing that makes coaches rethink their career paths.

And when it was over, he was sheepish. Borderline speechless, really.

Not because he was embarrassed by his team’s performance. Rather, he was proud of the complete, 40-minute effort they put forth.

“It was one of those games,” White said after Florida routed Providence 83-51 Tuesday night in the second game of the inaugural Air Force Reserve Basketball Hall of Fame Invitational.

“All teams I think this early in the season of course are finding themselves, (and we’re) certainly looking for sure but (we) took some steps tonight.”

That is an understatement. Keyontae Johnson was one of four Gators (7-3) to finish in double-figure scoring. Johnson led Florida with 19 points. Tre Mann contributed 13 points. Noah Locke chipped in with 11, and Ques Glover had 10. Florida has won five of six.

While the Gators appear to be rolling, Providence (6-6) appears to be stuck in neutral. The Friars have alternated wins and losses in their last four games, and overall have dropped four of six.

“That was a long game,” said Providence coach Ed Cooley.

With the outcome long determined, the only questions were whether Florida would set a season high in points scored and a season low in points allowed. The Gators had scored 78 against Miami on Nov. 22, while limiting the Hurricanes to 58.

Shot-making has been vital to success in basketball since Dr. James Naismith first hung a peach basket in 1891. Being able to score has only grown in importance as the sport is in an era of offensive efficiency, specifically from beyond the arc. Teams that can effectively take-and-make 3-pointers are in a better position to win than those who cannot.

Entering Tuesday night’s game, Providence had played 11 games and displayed a troubling inability to make shots from the perimeter as the Friars had only made 82-of-252 3-pointers — a .341 clip. As unsightly as that percentage is, it might as well be showcased in the Louve when compared to how they shot against the Gators. Providence finished the game having made just 1 of 18 3-point attempts, including all nine attempted in the first half. Luwane Pipkins’ 3 with 11:37 left in the second half ended the drought, but by that time, they had already missed 11 from beyond the line.

“I think our kids are playing hard,” Cooley said. “We’re just not having the success that we want.”

While the Friars were trapped in a 40-minute deep freeze, Florida authored a master class in offensive basketball. The Gators left the Barclays Center having shot 50.9% from the field, and 44.4% from 3.