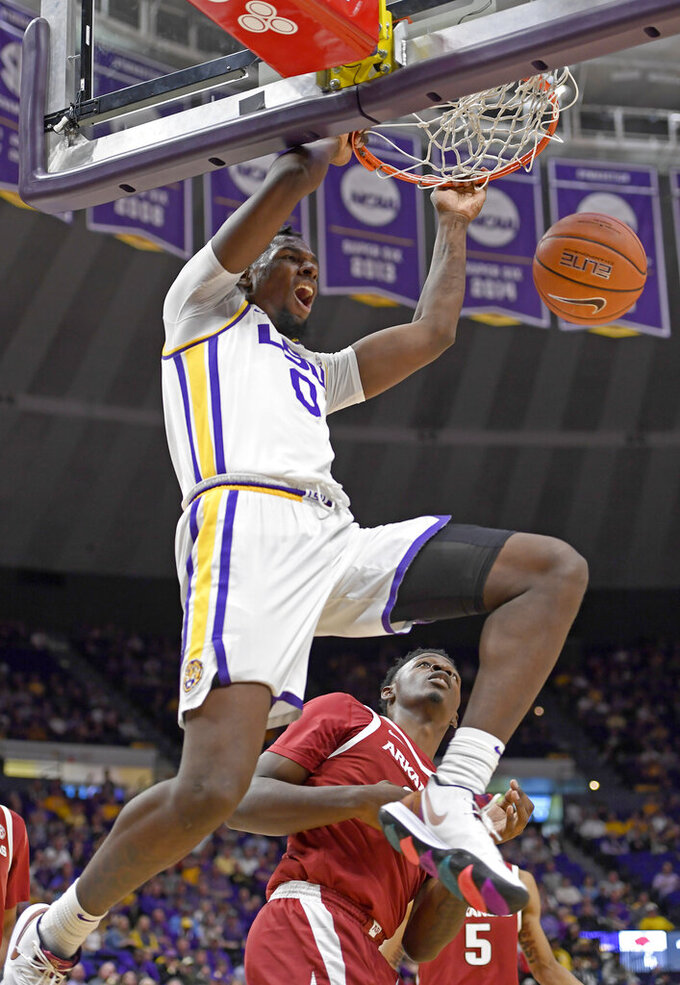 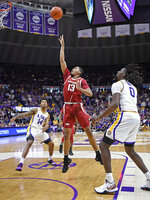 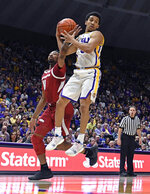 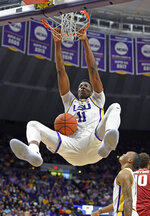 BATON ROUGE, La. (AP) — Arkansas coach Mike Anderson couldn't help but rave about his team's poise, even though the Razorbacks had blown an 18-point lead during the final 13 minutes.

Mason Jones hit a driving floater off the glass with 22 seconds left and Arkansas beat No. 19 LSU 90-89 on Saturday night to hand the Tigers their first conference loss this season and first home loss in more than a year.

"We were able to steal one today," Anderson said. "Our guys remained poised and did not panic."

Daniel Gafford scored 23 points and Isaiah Joe added 18 points for the Razorbacks (13-8, 4-4 SEC), who trailed three times in the last 3:39, but responded with points each time to halt LSU's streaks of 18 straight victories at home and 10 overall.

Joe hit two free throws with 3:27 to go and Gafford scored his final points in the paint with 3:01 left — each basket putting Arkansas up by a point before Jones reached 10 points on the game's final basket.

"They just tested us," Jones said. "We wanted to see if we were learning. We learned tonight."

Gafford became the third Razorback to foul out with 2:01 to go and Smart hit two free throws to put LSU in front 89-88.

But neither team scored again until Jones used a head fake to drive past LSU guard Tremont Waters — shortly after Waters had turned the ball over on a risky alley-oop lob intended for Marlon Taylor as Taylor cut along the baseline.

"Very disappointed we couldn't pull it out," LSU coach Will Wade said, adding that his team had been "cruising for a while" and could only expect to get away with it for so long.

"When you walk a tight rope — we've been walking a tight rope for about two weeks — you're eventually going to fall off," Wade said.

The Tigers had three shots on their last possession. Smart rebounded Reid's missed layup, but missed a pull-up jumper. Reid corralled the next rebound while moving away from the basket and his off-balance 3 fell short as time ran out.

"We need to play hard from the jump and not wait until the end of the game or when we are down," Reid lamented.

Arkansas players and coaches stormed off the bench and embraced one another as time ran out. Several players glared triumphantly toward the nearby LSU student section, from where they had been showered relentlessly with taunts as their once large lead slipped away.

Arkansas took its largest lead, at 66-48, when Reggie Chaney's dunk with 13:45 left capped a 10-0 run that also included five points from Adrio Bailey on two free throws and a 3. But a packed crowd at the Pete Maravich Assembly Center responded shortly after by roaring to urge LSU on. The Tigers chipped away and took their first lead since early in the first half on Smart's off-balance finger roll with 3:39 left.

Keyshawn Embery-Simpson tied a career high with 16 points for Arkansas, hitting four of his team's 13 3-pointers. Joe also hit four 3s, giving him 73 this season. Arkansas shot 54.2 percent from 3-point range (13 of 24) and hit a number of timely mid-range jumpers, as well while shooting 58.3 percent overall (35 of 60).

"We were due," Anderson said. "We finally shot the ball well, especially with guys coming off the bench and giving us energy."

Arkansas: Good shooting was narrowly enough to overcome LSU's 25-point advantage from the foul line and 44-20 advantage in rebounds. The Razorbacks have won three of four, providing hope for a strong finish to the regular season.

LSU: The Tigers, who won at Arkansas in overtime earlier this season, nearly came back by using their athleticism and imposing their will inside. They lost the game by losing track of Arkansas' best perimeter shooters and because of their own struggles from 3-point range, where they shot 20.8 percent (5 of 24). They also turned the ball over a season-high 21 times. Skyler Mays scored 17 for LSU and Waters finished with 12 points, eight rebounds and six assists. Kavell Bigby-Williams scored 10 points.