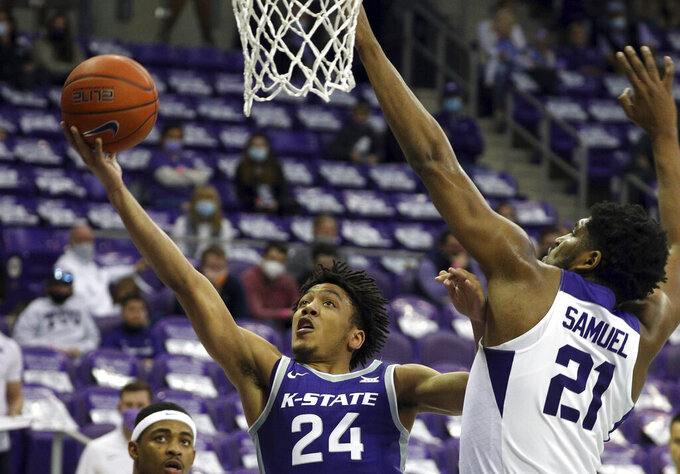 FILE - Kansas State guard Nijel Pack (24) goes up for a shot against TCU center Kevin Samuel (21) in the second half of an NCAA mens college basketball game in Fort Worth, Texas, in this Saturday, Feb. 20, 2021, file photo. They return most of their players from last season, including leading scorers Nijel Pack and Mike McGuirl, and they brought in plenty of help. (AP Photo/Richard W. Rodriguez, File) 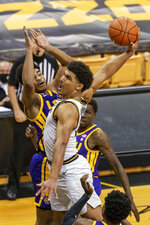 MANHATTAN, Kan. (AP) — After back-to-back losing seasons, Kansas State coach Bruce Weber knew he needed to make some changes this year, so he brought in a couple of former Marines to put the Wildcats through their paces before fall practice began.

It's something Weber had never done in 23 seasons as a college head coach.

“I couldn't be happier with what happened,” he said.

Weber witnessed the returnees from a team that won just nine games last season bond with a couple of freshmen and four Division I transfers away from the hardwood. He watched them suffer together, lean on each other, work with one another to solve problems — and find some inner grit that has been lacking the past couple of years.

“When you're in the pool and you got to take your sweatshirt off and put it back on and help your teammates and you don't know how to swim, that was a really tough thing for those guys to do,” Weber said. “I couldn't be happier with how the guys reacted to it, building some leadership, finding out who stepped up to help their teammates.”

Now the challenge is to take those lessons to the court.

The Wildcats won 25 games and reached their third straight NCAA Tournament a few years ago, but graduations left them rebuilding. The past two years have 20 wins total while putting Weber firmly on the hot seat.

Yet there are reasons for optimism in his 10th season in charge.

The Wildcats were among the youngest teams in the nation last year, and the growth they showed was evident in the way they won three of their final four regular-season games, including an upset of then-No. 7 Oklahoma. They also beat TCU in the first round of the Big 12 Tournament and nearly beat eventual national champ Baylor in the quarterfinals.

Nijel Pack and Mike McGuirl, their top two scorers, are back to lead the backcourt. Seven-footer Davion Bradford also is back after making massive progress late last year, showing the potential to be a frontcourt force in his second season.

Then there's the newcomers: Arkansas-Little Rock transfer Markquis Nowell, one of the best point-guards in the transfer portal; Missouri guard Mark Smith, a senior with plenty of experience; Wake Forest forward Ismael Massoud, who should provide some post experience; and Iona transfer Jordan Brooks.

Throw in freshmen Logan Landers and Maximus Edwards and the Wildcats should have plenty of depth.

“I wish it was some magical thing I did,” Weber said, “but even the new guys — you got three older guys that joined us in Mark, Ish and Markquis — they just jumped in like they’ve been here forever and they’re friends with everybody.

“So that was kind of the summer,” Weber said, "and a little starting to build some toughness. Our big theme was grit, driving for greatness, representing K- State. Intensity and toughness and togetherness. And we have used that theme throughout the summer into the fall.”

Not only did Pack lead the Wildcats in scoring last season, he also was tops in assists and among their best rebounders. He showed his vast potential in the Big 12 Tournament, scoring 23 points against TCU and 18 against Baylor.

Kansas State lost forward Seryee Lewis to a torn ACL that he sustained in preseason workouts. The 6-9 sophomore came off the bench to appear in 18 games as a freshman, and he was expected to provide some depth behind Bradford, Massoud and Kaosi Ezeagu — who is finally healthy after a series of injuries — in the low post.

Smith started 60 games over the past three seasons at Missouri, averaging 10.3 points and shooting better than 37% from beyond the 3-point line. The Wildcats will be relying heavily on his scoring punch after ranking 331st nationally in scoring at 61.8 points per game last season; they were 319th in 3-point shooting at 29.9% as a team.

Kansas State opens Nov. 10 against Florida A&M and plays Omaha before its first real test against Arkansas in the Hall of Fame Classic in Kansas City, Missouri. The Wildcats also have non-conference games against Wichita State, Marquette in the Big East-Big 12 Battle, and Nebraska and Ole Miss in the Big 12-SEC Challenge.