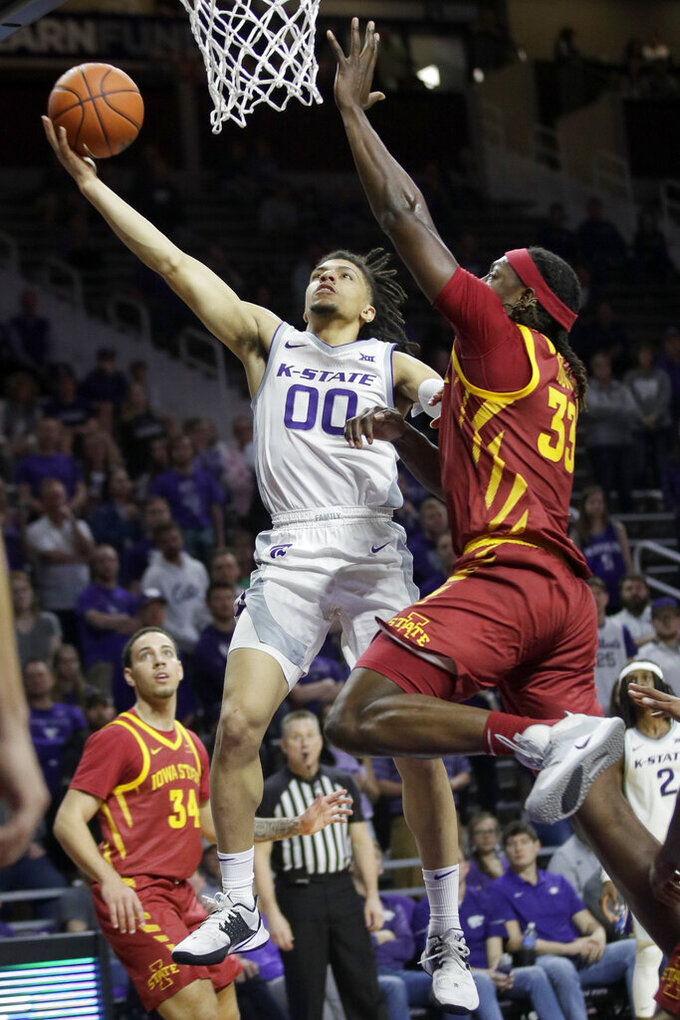 MANHATTAN, Kan. (AP) — Kansas State coach Bruce Weber doesn't have to look far to find some inspiration when it comes to winning with freshmen.

His counterpart in football, Chris Klieman, has them starting just about everywhere.

Weber lost his top three scorers from last season, when the Wildcats crashed back to 11 wins after three straight NCAA Tournament trips, and that means relying on a bunch of newcomers this time around. There are eight in all, including two junior college transfers and another from the Division I ranks ready to fill the void.

“One other time at Illinois, we had a large group of freshmen like this, or new players. I think we actually had more freshmen that year,” Weber said. “We're going to have to have guys step up. You saw it with football. You hear Coach (Klieman) talking about a freshman quarterback throwing to a freshman running back. They have been able to step up.”

The shoes are big, though. Xavier Sneed has been a crucial cog the past four years and averaged 14.2 points last season, and Cartier Diarra and Makol Mawien provided steady influence. David Sloan and Levi Stockard also played major minutes.

Their top returning player is senior guard Mike McGuirl, who averaged 6.9 points. The other three returners — Montavious Murphy, DaJuan Gordon and Antonio Gordon — have only a freshman season of lumps on their resume.

“Mike and DaJuan, they've been through it. They work very, very hard at it,” Weber said. “I think they can give us points.”

Where the rest of the points come from is anyone's guess.

The highest-ranked recruits are four-star prospects Nigel Pack, an explosive point guard from Indianapolis, and Selton Miguel, a top-100 small forward from Orlando, Florida. Davion Bradford is a 7-footer from St. Louis who can provide the Wildcats some much-needed defense in the paint and Luke Kasubke — who will miss several months with an injury — could be the steal of the class if he's able to get onto the court for meaningful minutes.

Not all the newcomers are inexperienced, either. Kaosi Ezeago transferred from UTEP, where he averaged 3.2 points, and Carlton Linguard and Rudi Williams were among the top junior college recruits in the nation.

“I hope we have a little bit more inside presence with Kaosi, Davion, Carlton (Linguard). To be able to throw it into the post and get more production there,” Wever said. “And then the freshman, I think Nijel and Selton, they’re going to get us points.”

The Wildcats open with Drake and Colorado as part of a nonconference schedule designed to build confidence. They also face UMKC, UNLV, Milwaukee, Jacksonville and South Dakota along with a trip to Butler. Their opponent in the SEC-Big 12 Challenge is Texas A&M in late January.

Not only do the Wildcats need to identify scoring, they also need to develop some leaders. Ezeagu and Williams have the experience to do it and Murphy has the personality and energy to bring the rest of the team along with him.

“Those guys have been in a college locker rooms," Weber said. “They’ve been through a college season.”

The Wildcats have always hung their hat on defense but their defensive efficiency took a plummet last season. The Wildcats hope Bradford and the 6-10 Ezeagu can help turn those numbers around.

Kasubke had foot surgery over the summer and Weber said his recovery would be “more months than weeks." The 6-foot-5 freshman from St. Louis was expected to provide some of the perimeter scoring that the Wildcats missed last season.

Kansas State brought back former player Shane Southwell, who had been at Robert Morris, as an assistant when Brad Korn left to become the head coach at Southeast Missouri. Southwell was a standout for the Wildcats from 2010-14.

“He gives us some youthful excitement,” Weber said. “He’s still a young guy, just played professionally. Not long ago he was here part of a Big 12 championship. He’s been a player here, he’s been a student-athlete here, he’s been a graduate assistant, so he can bring a lot to the table for us.”