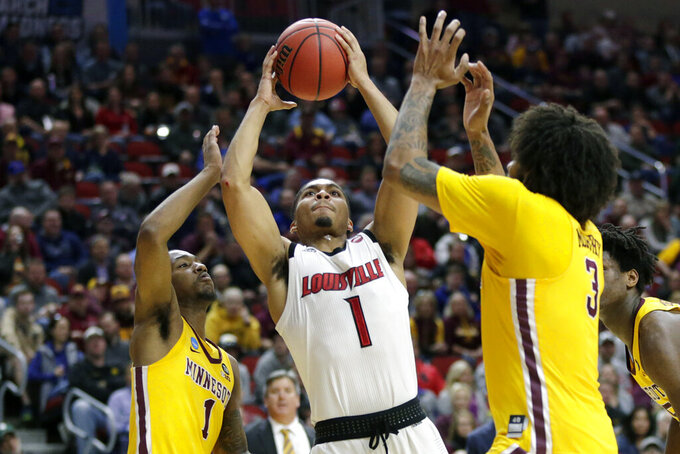 Louisville's Christen Cunningham (1) goes to the basket against Minnesota's Dupree McBrayer, left, and Jordan Murphy (3) during the first half of a first round men's college basketball game in the NCAA Tournament, in Des Moines, Iowa, Thursday, March 21, 2019. (AP Photo/Nati Harnik) 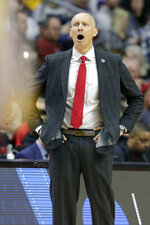 The 10th-seeded Gophers won their first NCAA Tournament game in six seasons behind 24 points from freshman Gabe Kalscheur, who helped Minnesota roll past Louisville 86-76 in the opening round of the East Region on Thursday.

The win for Pitino came against school that fired his father. Rick Pitino coached the Cardinals for 16 seasons before his 2017 dismissal.

Amir Coffey also had 18 points for Minnesota (22-13), which knocked down 11 3s despite entering play ranked 344th nationally in made 3s per game.

Five of those triples came from Kalscheur, who finished a point shy of his career high for points.

Kalscheur's layup early in the second half gave Minnesota its first double-digit lead, 43-33, and Murphy's layup made it a 50-38 game with 16:06 left.

The Cardinals went to a full-court press in an effort to slow down the surging Gophers. But that just left Kalscheur open from the same spot on back-to-back possessions, and he drilled two 3s to give Minnesota a 59-43 lead.

Louisville then fouled Kalscheur behind the 3-point line, where he pushed the Gophers' edge to 19 with 9:48 to go.

"I feel like they were giving it to us," Kalscheur said. "We just fed off each other."

Murphy's 3 with 5:28 left — just his seventh all year — made it a 15-point game and typified just how well things were rolling for Minnesota.

"I thought we played really good defense when we needed to. We showed great toughness and grit down the stretch," Pitino said. "You can't undersell it. That's a terrific win for our guys. Being proud of (them is) probably an understatement for these guys."

The seventh-seeded Cardinals (20-14) did cut it to seven late, but Christen Cunningham missed an open 3 that could've made things interesting down the stretch.

Cunningham led Louisville (20-14) with 22 points, and Steven Enoch had 14. The Cardinals finished the season with nine losses in 14 games.

"Really a tough feeling to end your season so quickly," Louisville coach Chris Mack said. "I am very proud of our group. They exceeded a lot of people's expectations."

Minnesota: This was the breakthrough Pitino had been searching for from the Gophers. Minnesota played arguably its best game of the season, and Kalscheur scored more points in 40 minutes than he did in three games during the Big Ten tournament.

Louisville: Despite dropping his first NCAA Tournament game with the Cardinals, Mack's future looks bright at Louisville — especially if Jordan Nwora (10 points, 11 rebounds) returns next season. Louisville got no help in the game location, less than 250 miles from Minneapolis, which created a de-facto home game for the Gophers. Louisville did have one famous fan on its side though, as actor Bill Murray watched from behind the Cards bench. Murray's son Luke is an assistant at Louisville.

With 2:46 left and Louisville down 12, Darius Perry banked in a long 3 as the shot clock went off. The officials confirmed it after a video review, making it 76-67 Minnesota. Perry followed with a 3 to pull the Cards within seven, but Minnesota's ability to navigate Louisville's press without putting the ball in danger rendered Louisville's comeback hopes moot.

WHO NEEDS A BENCH

Minnesota didn't get a single point from its bench, becoming the first team to win a first-round game since Norfolk State stunned Missouri seven years ago.

Minnesota plays the Michigan State-Bradley winner on Saturday with a trip to the Sweet Sixteen on the line.