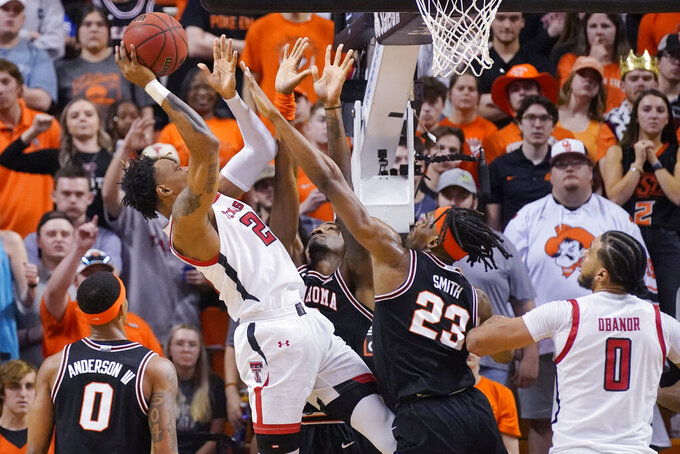 KANSAS CITY, Mo. (AP) — The Big 12 Tournament was the place where Kansas validated its regular-season conference championship each year, and usually confirmed its status as one of the top seeds and heavy favorites for the NCAA Tournament.

That's changed a bit over the years.

This year's tournament figures to be just as wide open.

Yes, the sixth-ranked Jayhawks are back as the top seed and will play the winner of an opening-round game Wednesday night between Kansas State and West Virginia. But third-ranked Baylor, the defending national champion, lurks as the No. 2 seed as it tries to win its first Big 12 tourney title, No. 14 Texas Tech is seeded third under coach of the year Mark Adams, and the No. 21 Longhorns are plenty capable of defending their title as the tournament's fourth seed.

“I believe in these guys. I really do,” said Chris Beard, who led the Red Raiders in five Big 12 tourneys but will be there with Texas for the first time. “It's been a challenging season. It's the first year. It's tough. Relationships are being formed while we're playing in the toughest conference in the country. But now it's fun time. It's winning time. It's time to play in March.

The Longhorns begin the quarterfinal round Thursday against TCU, which went 19-11 in the regular-season and split a pair of regular-season games with Kansas last week. The Jayhawks follow with their game while Baylor plays No. 7 seed Oklahoma and the Red Raiders wrap up a quadruple header of ranked games against the sixth-seeded Cyclones.

As for the Jayhawks, they've been riding a rollercoaster all season. They lost consecutive games to Baylor and TCU in the last couple weeks, then rebounded to beat the Horned Frogs and clinch the No. 1 seed with a win over Texas.

If the Jayhawks are healthy — and that's been a big question all season — they could still be the team to beat.

“These last couple weeks we had a chance to seal it and kind of take it away from everyone, but having two losses in a row shocked us a little bit,” Kansas forward Jalen Wilson said. “We're just now showing hat we can do.”

Baylor has played in three Big 12 Tournament title games without ever cutting down the nets. The last time the Bears made it was in 2014, when they lost as the No. 7 seed to Iowa State in the finals.

“I feel really good about this team,” said Baylor guard James Akinjo, whose team has won five straight. “I feel like we're playing some of our best basketball right now. We can still get a lot better but we just got to keep going.”

Kansas guard Ochai Agbaji was the only unanimous first-team All-Big 12 pick this week along with earning The Associated Press Big 12 player of the year award. He was joined on the first time by Akinjo, Iowa State guard Izaiah Brockington, Nijel Pack of Kansas State and Texas Tech forward Bryson Williams.

Iowa State won its first 12 games under new coach T.J. Otzelberger, then proceeded to lose nine of its first 12 games to begin league play. Still, the Cyclones finished 20-11 after winning just two games under Steve Prohm last season, and if they're not already an NCAA Tournament lock, a win in Kansas City should do the trick.

Oklahoma also got off to a hot start under former Loyola Chicago coach Porter Moser, winning 11 of its first 13 with highlights against Florida and Arkansas. The Sooners weathered a pair of four-game skids during Big 12 play, though, which put their at-large NCAA hopes in doubt. They're headed to Kansas City off three straight wins and in need of a couple more.

There will be just one first-round game Wednesday night because Oklahoma State is banned from postseason play, part of a package of punishments handed down by the NCAA for rules infractions. The Cowboys lost a bid to secure an exemption to play in the league tournament.