Kansas announces extension of deal with Adidas through 2031 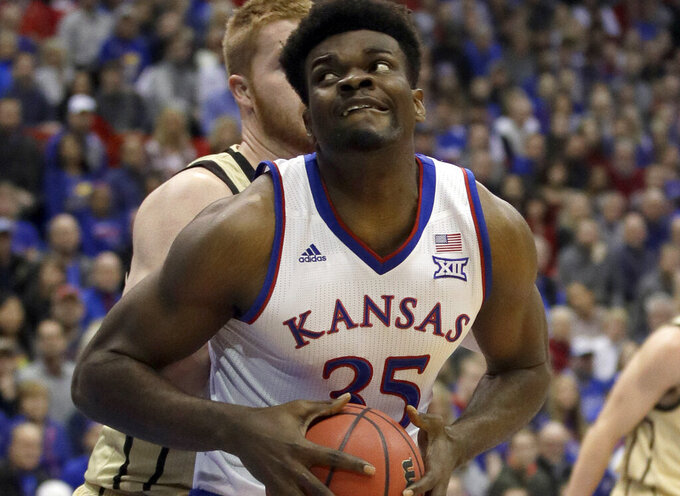 FILE - In this Dec. 4, 2018, file photo, Kansas center Udoka Azubuike (35) drives to the basket past Wofford center Matthew Pegram, back, during the first half of an NCAA college basketball game in Lawrence, Kan. The University of Kansas and Adidas announced Wednesday, April 24, 2019, an extension of their contract through 2031, despite an FBI investigation centered on the footwear and apparel company that cast a negative light on the Jayhawks' athletic programs. The Jayhawks have worn Adidas gear since 2005. The original eight-year agreement was extended by six years through 2019, then another extension was put on hold last fall amid the investigation. The new deal is worth $14 million annually. (AP Photo/Orlin Wagner, File) 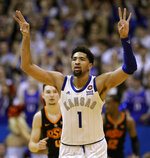 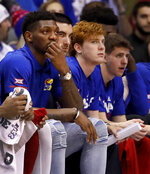 LAWRENCE, Kan. (AP) — The University of Kansas and Adidas announced Wednesday an extension of their contract through 2031, despite an FBI investigation centered on the footwear and apparel company that cast a negative light on the Jayhawks' athletic programs.

The Jayhawks have worn Adidas gear since 2005. The original eight-year agreement was extended by six years through 2019, then another extension was put on hold last fall amid the investigation. The new deal is worth $14 million annually.

"This commitment is much more than the standard sponsorship product-allowance agreement," Kansas athletic director Jeff Long said in a statement. "Adidas has demonstrated a genuine commitment to the long-term growth of Kansas Athletics."

Still, the extension comes amid a tense time for both Kansas and college sports in general.

The FBI investigation into college basketball corruption involved former Adidas executive James Gatto and implicated several schools. Kansas became involved last year when an indictment alleged that Gatto and the coach of an Adidas-sponsored AAU team paid prospects to steer them to the Jayhawks.

As part of the fallout, forward Silvio De Sousa was suspended all of last season and the upcoming season. De Sousa has declared for the draft while the school appeals to have him reinstated.

Gatto, former Adidas consultant Merl Code and agent runner Christian Dawkins have been convicted of felony charges of wire fraud in the case. Earlier this month, Gatto entered an agreement to pay nearly $350,000 in restitution to Kansas and North Carolina State to cover legal fees and scholarship amounts that each player named in the investigation received from the schools.

"We cooperated fully with the authorities during the course of the investigation," Adidas said in a statement last October. "We look forward to continuing to work with the NCAA and other stakeholders in a collaborative and constructive manner to improve the environment around college basketball."

Kansas chancellor Douglas Girod said "both we and Adidas have done our due diligence and thoroughly evaluated all factors related to this partnership." He also acknowledged that included "the current environment related to college basketball."

"This partnership with Adidas strengthens our university and better enables us to fulfill our mission of education, outreach and research," Girod said. "We are confident about this renewed partnership and look forward to continuing our relationship with Adidas."

The extension covers all 18 programs and more than 460 student-athletes at Kansas, and includes footwear, uniforms and other gear. But it comes at a particularly crucial time for its high-profile hoops program and its long-suffering football program.

The basketball team is coming off a disappointing season by its lofty standards, failing to win a share of the Big 12 title for the first time in 15 years. The Jayhawks also failed to escape the first weekend of the NCAA Tournament, and the FBI's investigation has hurt them on the recruiting trail.

The football team is trying to build some momentum behind new coach Les Miles, who led LSU to a national title but inherited a team that hasn't had a winning season in more than a decade.

"In addition to benefiting all 18 of our sport programs," Long said, "this agreement also provides resources to invest in our football program and the future renovation of Memorial Stadium."