Kansas earns No. 1 seed in Midwest Region; Auburn gets No. 2 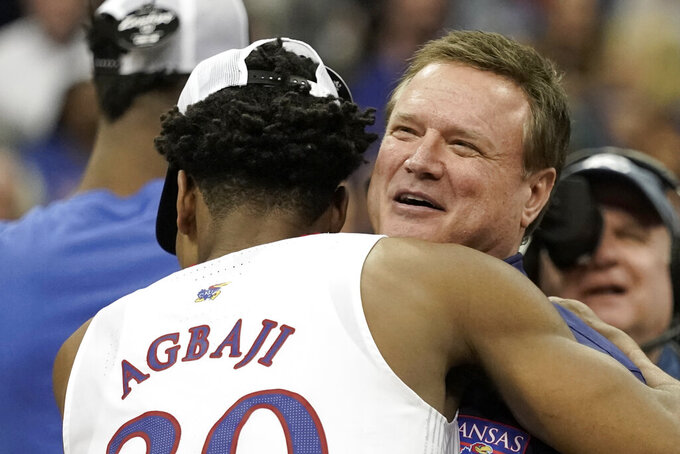 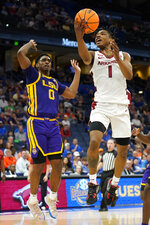 LAWRENCE, Kan. (AP) — Kansas fought its way through arguably the toughest league in college basketball this season, ultimately sharing the Big 12 regular-season title with Baylor before romping past Texas Tech to win the conference tournament.

Maybe it's karma that the Jayhawks could have the easiest path of a No. 1 seed to the Final Four.

They earned the top seed line for the 15th time on Sunday, second only to North Carolina for most in college hoops history, and Big 12 player of the year Ochai Agbaji and Co. will open the NCAA Tournament in the Midwest Region against the play-in winner between Texas Southern and Texas A&M-Corpus Christi in Fort Worth, Texas.

“I mean, being a 1-seed shows you've gone through the whole year, put in all the work, the grind it takes to be a 1-seed,” Kansas forward Jalen Wilson said, “and now it's time to show it. It comes with the good and bad. Now you have everyone gunning for you. We're used to getting everyone's best shot anyway. Just have to represent it well.”

Jayhawks coach Bill Self has a No. 1 seed for the 10th time, third-most in history, trailing only retiring Duke coach Mike Krzyzewski with 14 and former Kansas and North Carolina coach Roy Williams with 13.

“I never love our draw and I probably don't this year, either,” Self said, “but I certainly don't hate it.”

While the Jayhawks never reached the top spot in the Top 25 this season, their biggest roadblock to reaching New Orleans spent three weeks there. That would be second-seeded Auburn, the regular-season SEC champs, who will begin their quest for a second Final Four appearance four years against Jacksonville State in Greenville, South Carolina.

The Tigers were in line for a No. 1 seed for most of the season, but they took their lumps down the stretch, losing five of their last nine games to slip a line on the bracket. That included a quarterfinal loss to Texas A&M in the SEC tourney.

Other favorites to reach the Midwest Region semifinals in Chicago include No. 3 seed Wisconsin and fifth-seeded Iowa, which won its first Big Ten tourney title since 2006 with a victory over Purdue on Sunday; Big East regular-season champ Providence; and No. 6 seed LSU, which will play under interim coach Kevin Nickelberry after firing Will Wade over the weekend, one day after the Tigers were beaten by Arkansas in the quarterfinals SEC Tournament.

Allegations against Wade stem from a wide FBI investigation into corruption in college basketball that has implicated numerous major programs, including two others in the Midwest Region: Kansas and Auburn.

The Midwest Region is loaded with big-name talent, starting with Auburn standout Jabari Smith, the likely No. 1 pick in the NBA Draft. The 6-foot-10 freshman is averaging about 17 points and nine rebounds a game.

Along with Smith and Agbaji there's Iowa standout Keegan Murray, the nation's fourth-leading scorer; Wisconsin shooting guard Johnny Davis, another likely lottery pick; and Auburn's Walker Kessler, who should be picked in the top 20.

Gonzaga and Arizona are No. 1 seeds elsewhere in the bracket, but the dominance of the Pacific time zone this season is evident in the Midwest Region, too. Seventh-seeded USC is back after a run to the regional finals last year, while eighth-seeded San Diego State lost a 53-52 nail-biter to Boise State in the Mountain West tourney title game.

The third-seeded Badgers should have the biggest fan advantage of anyone in the opening two rounds of the tourney, playing Colgate and a potential second-round game against LSU or Iowa State in Milwaukee. Fiserv Forum is just over an hour from the Wisconsin campus in Madison.

GETTING HOT IN HERE

No. 12 seed Richmond heads into its game against the Hawkeyes on the heels of an Atlantic 10 Tournament title that the Spiders probably needed just to make the 68-team field. Other teams heating up at the right time include 14-seed Colgate, which has won 15 straight, including its romp to the Patriot League tourney title; and 13th-seeded South Dakota State, which put together a gaudy 30-4 record and hasn't lost a game since Dec. 15.

Kansas could be the biggest favorite of the four No. 1 seeds to reach New Orleans, but much like the rest of the bracket, even the Midwest Region is wide open. Wisconsin and Iowa fought to high seeds out of a brutally tough Big Ten, while the Tigers of coach Bruce Pearl showed earlier this season that they're capable of being the nation's No. 1.

What could make the road to New Orleans easier for Kansas, though, is that their first four games would be played in the Dallas metro and Chicago, which are both easy drives from their campus and locations with large alumni bases.