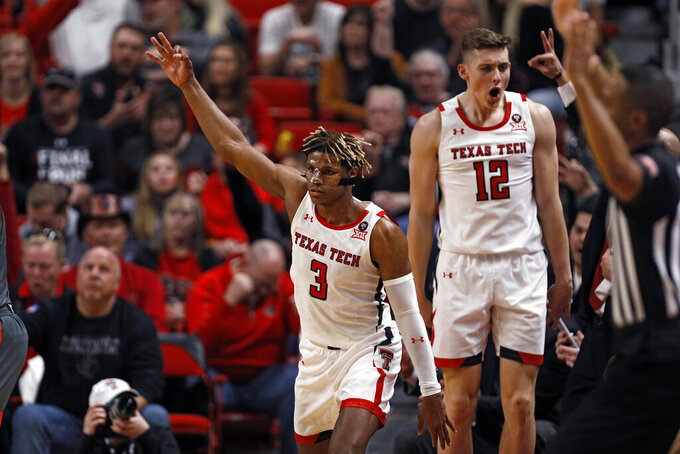 LAWRENCE, Kan. (AP) — Bill Self walked into Allen Fieldhouse to greet a new bunch of Jayhawks this summer and something was missing.

Oh, right. Another year on the banner that touts Big 12 titles at Kansas.

The Jayhawks failed to win the conference title last season for the first time in 15 years, with Texas Tech and Kansas State ending to their record-setting streak by sharing in the league laurels. Iowa State completed the underwhelming season — at least by Kansas' standards — by waxing the Jayhawks in the championship game of the Big 12 tournament.

With the league's double round-robin schedule about to begin anew, the fifth-ranked Jayhawks are back in the crosshairs of the rest of the conference. They've put together a solid nonconference run, briefly spent time at No. 1 and appear to be the most complete team in the league.

“I think this team is more motivated," sophomore forward Ochai Agbaji said. “When we came in at the beginning of the summer, all of the guys were here with the attitude to push each other and make each other better.”

Self even acknowledged more excitement about this season, though that may be in part due to an offseason filled with off-the-court drama concerning the NCAA. But it helps that Kansas returns that vast majority of its players, had a strong start to the year with a Maui Invitational title along the way, and has a conference schedule that appears set up for success.

Two of their first three games are in Allen Fieldhouse against the biggest nonconference surprises — and perhaps their best competition for the league title — in No. 22 West Virginia and seventh-ranked Baylor.

“Obviously, every team wants to win the (NCAA) championship, they want to go to the Final Four. This team, is aiming for that, too,” senior center Udoka Azubuike said. “But right now we are just taking it one game at a time.”

As those Big 12 games get going, here are some things to know:

The Red Raiders had to replace the bulk of their Final Four team, including stars Jarrett Culver, Matt Mooney, Tariq Owens and Norense Odiase. And while transfers T.J. Holyfield and Chris Clarke combined with a strong recruiting class to fill in some of the gaps, there have been obvious and expected growing pains in Lubbock.

But the Red Raiders rebounded by knocking off then-No. 1 Louisville in New York, kicking off another winning streak that has them rolling into their conference opener against Baylor.

Kansas State, meanwhile, has yet to find its stride as it replaces a senior class that was among the most accomplished in school history. The Wildcats already have dropped games to Pittsburgh, Bradley, Marquette, Mississippi State and St. Louis.

West Virginia won just four Big 12 games last season to finish last in the league, its season done in by on- and off-the-court drama. But coach Bob Huggins retooled his team over the summer and the rewards have been immediate: The Mountaineers' only nonconference loss came by two points to St. John's in what amounted to a road game in New York. West Virginia capped its conference prep by beating No. 2 Ohio State 67-59 Sunday.

The other big surprise is Baylor, which hasn't lost since facing Washington in early November. The streak by coach Scott Drew's crew includes wins over ranked foes Villanova, Arizona and Butler.

As nice as it might be to hoist a trophy, winning NIT championships doesn't quite cut it at Texas. So it was no surprise that coach Shaka Smart was on the hot seat as the season began in Austin, and it could take a run toward the top of the Big 12 to save the former VCU coach's job once again.

The Longhorns already have nonconference losses to Georgetown and Providence working against them.

The biggest star so far has been Kansas guard Devon Dotson, who leads the league in scoring (19.2 points) and is fourth in assists at nearly five per game. Azubuike, his inside-outside running mate, leads the nation in field goal percentage at better than 80% — it helps that the vast majority of his shots finish in dunks.

Baylor guard Jared Butler may be the biggest surprise, though. He's taken his average from 10 points as a freshman to more than 17 per game, and he's a big reason why the Bears are suddenly championship contenders.

The Big 12 schedule forces every team to face each other twice, once at home and once on the road. And that usually means the league race comes down to the final week. Perhaps by design, the first week of March brings Texas Tech-Baylor, Kansas-Texas Tech and Baylor-West Virginia.