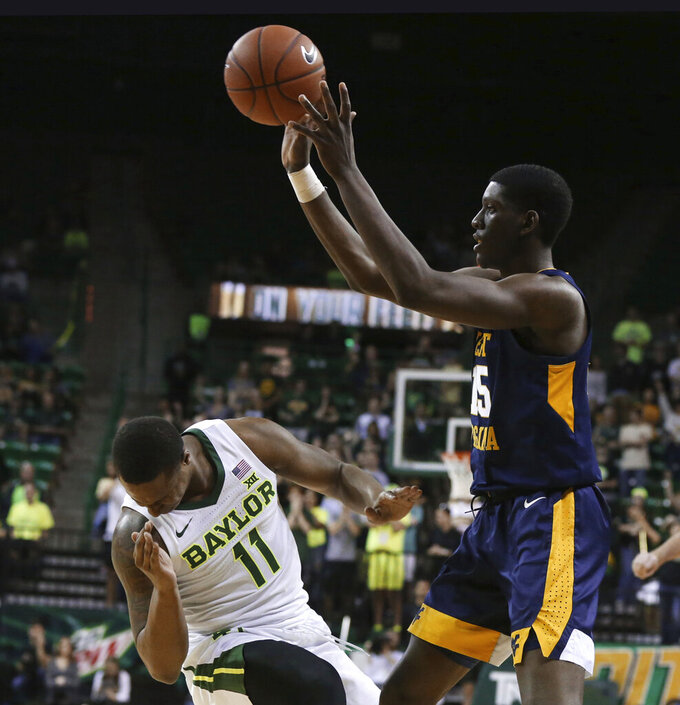 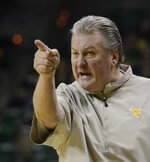 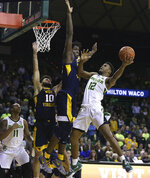 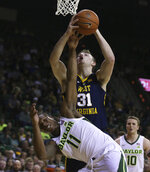 WACO, Texas (AP) — The first time Baylor played West Virginia, it barely had to sweat in the final few minutes of a comfortable Big 12 road win.

That wasn't the case Saturday at home, when the game came down to those waning moments, but Baylor was up to the challenge.

Mario Kegler was one of two Bears with a career high in scoring with 23 points, which included a 3-pointer that gave Baylor the lead for good and six free throws in the final minute in an 82-75 win over West Virginia.

"We got a rebound and I just took off running. I looked back, and I was wide open," Kegler said. "Makai (Mason) was pushing it. I had a good shot, and I just took it. I spend so much time working on that corner 3 out there, I just try to show it."

Devonte Bandoo, who had 22 points off the bench, made a jumper that started a 10-0 run for Baylor (18-9, 9-5) before Kegler's go-ahead 3. West Virginia was then hit with a technical foul for having six men on the floor out of a timeout.

"Devonte didn't have a full summer here, kind of got off to a slower start early in the year and didn't shoot well," Baylor coach Scott Drew said. "Now you're really seeing what he's capable of shooting-wise. When you're stretching the defense like that, it really helps."

Bandoo split the technical free throws, and Jared Butler followed with a 3-point play, and Baylor stretched the spurt to 16-2 with Kegler's free throws.

Vital hit for a career-high 15 points and added 14 rebounds, while Butler put in 12 points for the Bears, who won their first Big 12 game after trailing at halftime (1-5).

"(Vital) may be the first MVP of the league who scores seven or eight points a game, whatever he does," West Virginia coach Bob Huggins said. "He's unselfish, and he's a great team guy. He makes big plays for them, makes plays when they need plays."

Lamont West had 15 points for West Virginia but was 4 for 14 from the floor, while Jordan McCabe added 14. Jermaine Haley and Andrew Gordon scored 13 apiece for the Mountaineers, who lost their fifth straight.

"It's hard when you have guys and then you don't have guys," Huggins said. "These guys have been through a lot and I think we can get this thing turned and win some games the rest of the year."

West Virginia used its size and physicality to pile up fouls against the Baylor big men early, but it soon after began to have its own foul difficulty. That limited the depth for a Mountaineer team that dismissed two players recently, and it allowed Baylor to eventually pull ahead in the rebounding battle, 37-33.

Baylor clinched at least a .500 record in Big 12 and further solidified its standing for an NCAA tournament berth despite a rash of injuries that threatened to derail its season. The Bears have struggled from the free throw line for most of the season, but they were 9 for 11 in the final 2:01 to put this one away.

West Virginia freshman Derek Culver didn't have a big day on the stat sheet, but he gave the Bears fits in the paint.

He had nine points on 2-of-9 shooting from the floor, 5 for 10 from the free throw line, and turned the ball over six times. But he was the main factor in Baylor's big men Freddie Gillespie and Flo Thamba combining for five fouls in the first seven minutes.

Gillespie ended up fouling out in 14 minutes, while Thamba's four fouls limited him to nine minutes. Culver fouled out on a charge with 1:08 left and Baylor leading 75-70.

Baylor remains at home to meet Texas on Wednesday.