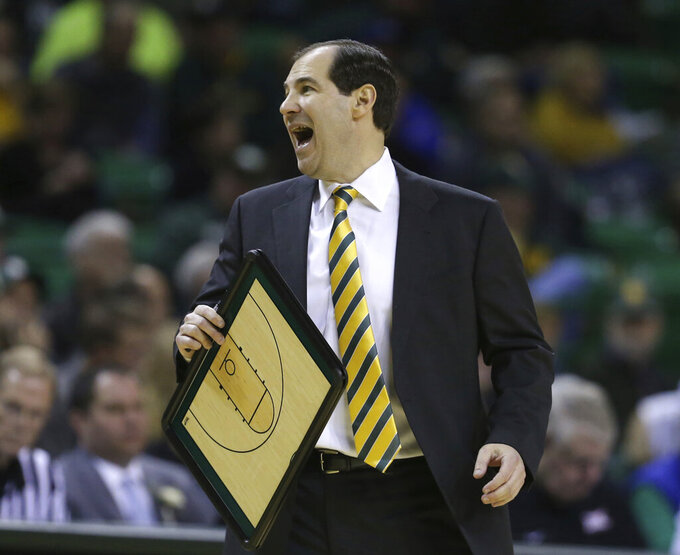 Baylor head coach Scott Drew looks at the bench after a turnover against Alabama in the second half of an NCAA college basketball game, Saturday, Jan. 26, 2019, in Waco, Texas. (Rod Aydelotte/Waco Tribune-Herald via AP) 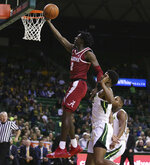 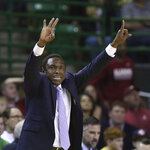 This ending was better than the three he remembers from his freshman year.

Kegler scored 17 points and Makai Mason had 13 along with the bucket that put the Bears ahead for good in a 73-68 victory over the Crimson Tide in the SEC/Big 12 Challenge on Saturday.

"I played Alabama like three times my freshman year and I don't think I had a good game in either one," Kegler said of those three losses, including his season-ender in the SEC Tournament. "So I was laying in bed last night like, 'Dang, I've never had a good game against 'Bama.'"

Riley Norris made all four of his 3-pointers and scored 16 points for the Crimson Tide (12-7), including a 3 that kept it a one-possession game at 69-66 with 31 seconds left. Tevin Mack and Kira Lewis Jr. scored 15 apiece for Alabama.

Mason made two free throws to get the lead back to five, and Lewis missed a layup at the other end as the Bears (13-6) won their fourth straight game and improved to 5-1 in the SEC/Big 12 Challenge. It was Alabama's first loss in three challenge games.

"We just didn't have our best game today," Crimson Tide coach Avery Johnson said. "There were stretches where we played some decent basketball. But we just didn't play enough of a 40-minute game to win a game on the road."

Kegler wasn't the only Baylor player looking forward to seeing the Crimson Tide. Jared Butler hit two quick 3s early against the school he chose but never played for after getting his release from Alabama last year and the chance to play right away as a freshman for the Bears.

Butler had just three points the rest of the way to finish with nine while leading the Bears with five assists along with just one turnover as Baylor matched a season low with eight turnovers. Coach Scott Drew wanted to make sure Butler wasn't too hyped for the reunion.

"We actually talked to Jared about that, and he said, 'Nah, I'm going to be relaxed, let the game come to me and not try to do too much,'" Drew said. "And that's exactly what he did. He took open shots, he made them, was tremendous from the floor."

Kegler, who also led Baylor with seven rebounds, erased the Bears' final deficit with a 3-point play for a 59-all tie followed by another bucket for the lead.

Mason, the former Yale player and first graduate transfer at Baylor, hit a fadeaway jumper that broke the last of nine ties in the second half and gave the Bears a 63-61 lead.

Baylor pushed the lead to six when Devonte Bandoo hit a jumper directly off an inbounds pass after a close possession call went to the Bears. Bandoo then stole a pass and hit a layup in transition. Those were all four of Bandoo's points.

Donta Hall had 11 points, seven rebounds and three blocks for the Crimson Tide.

Alabama: The Crimson Tide have followed a pair of SEC wins over ranked opponents this month (No. 8 Kentucky and No. 20 Mississippi) with pair of road losses to unranked teams. The first was 88-79 at LSU after beating the Wildcats. Before beating Ole Miss, Alabama lost by three at No. 1 Tennessee.

"We've been a little inconsistent," Johnson said. "We were in the last road game at Tennessee ... and now we're right here in this game and turn the ball over and we don't make the right plays at the right time."

Baylor: With a boost from Butler joining the starting lineup because of Tristan Clark's season-ending knee injury, the Bears went on a strong three-game run of 3-point shooting at 42 percent after being at 29 percent through 15 games. It was back to the old form against the Crimson Tide at 6 of 22 (27 percent). Baylor made up for it with a 35-31 rebounding edge, just the second team to beat Alabama on the boards this season.

Baylor: At Oklahoma on Monday.