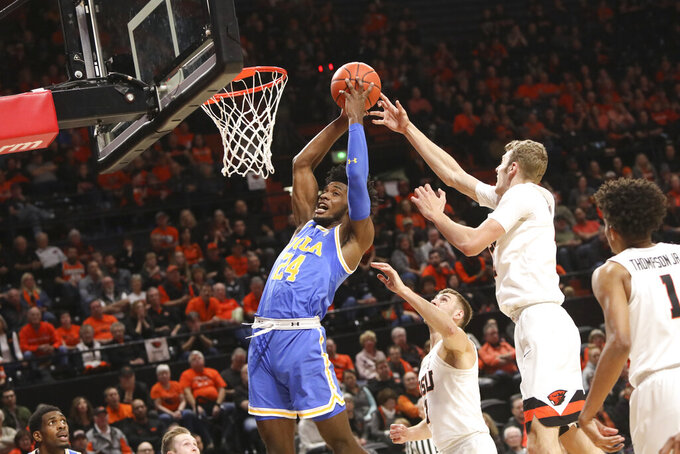 UCLA's Jalen Hill grabs a rebound away from Oregon State's Kylor Kelley (24) and Tres Tinkle (3) during the first half of an NCAA college basketball game in Corvallis, Ore., Sunday, Jan. 13, 2019. (AP Photo/Amanda Loman) 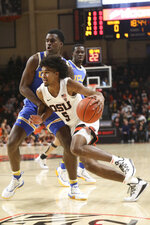 CORVALLIS, Ore. (AP) — Oregon State coach Wayne Tinkle said he wanted his team to penetrate the lane, draw the opponent's big man and drop the ball off to 7-footer Kylor Kelley down low.

"Kylor is, I think, maybe the best finisher in our league at the rim," he added.

Kelley was a perfect 6 for 6 from the field and finished with 14 points and five blocks as Oregon State defeated UCLA 79-66 on Sunday night.

"It wasn't always a thing of beauty, but, boy, our guys are playing so dang hard," Tinkle said.

Kris Wilkes had 21 points with four 3-pointers and Prince Ali added 13 points for the Bruins (10-7, 3-1), who lost their first game in four tries under interim coach Murry Bartow.

"We were just stagnant, really stagnant offensively, didn't zip it around like we've been doing, and I think Oregon State had a lot to do with that. Defensively, they're pretty good," Bartow said.

Oregon State shot 47.5 percent from the floor, and 14 for 18 on free throws, compared to 38 percent on field goals and 10 for 21 from the charity stripe for UCLA.

"I think our main emphasis is defense. Offense will come and go, but defense, that's what we focus on in practice," said Alfred Hollins, who finished with 11 points for Oregon State.

The Beavers went on an early 10-1 run, which included a contested break-away dunk by Ethan Thompson, to take a 26-17 lead with five minutes left in the first half.

The Beavers pushed the lead to as many as 18 points late.

UCLA: The Bruins came into the game shooting 62.8 percent on free throws. . UCLA averaged 20 turnovers in its previous four games, but only had 14 on Thursday.

Oregon State: Leading scorer and rebounder Tres Tinkle returned after missing Oregon State's 79-74 overtime win over Southern California on Thursday due to a sprained ankle. He had 14 points, six rebounds, six assists and five steals. . The last time Oregon State started 3-0 in Pac-12 play was in 1992-93.

MORE MOSES: Bartow said that the Bruins took too many perimeter shots and didn't go inside-outside enough. "I don't think we got Moses Brown enough touches," he added. Brown, a true freshman who stands 7-foot-1, shot 4 for 6 on the night, and finished with nine points, nine rebounds and two blocks.

BACK TO THE COURT: Wayne Tinkle said he told the team doctor 35 minutes before the game that his son wasn't playing, then reconsidered. "I said let me judge his mood when he comes down. All I did was look at him, and he said, 'Let's flipping go. I'm ready.' He didn't have one of his typical games, but I thought he showed a lot of heart. And the rest of the guys just made play after play after play on both ends to get this win tonight," Wayne Tinkle said.