Kentucky looking for answers after worst start in 94 years 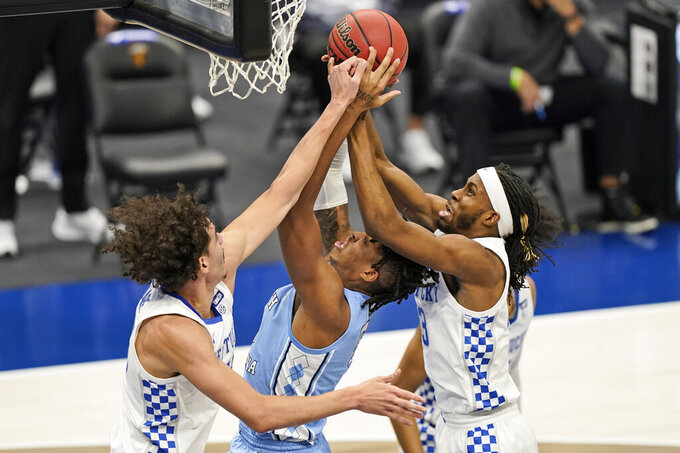 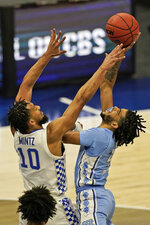 Coach John Calipari insists his Wildcats can rebound and be a contender.

With 19 scheduled games remaining in this pandemic-shortened season, the Hall of Fame coach isn’t panicking about Kentucky’s 1-6 start, its worst since the 1926-27 squad began 1-8.

The combination of a challenging nonconference slate and growing pains on both ends of the floor by Calipari’s latest freshman-laden roster has translated into six consecutive losses. The skid is the longest in Calipari's 12 seasons in Lexington, and Kentucky has fallen out of the Top 25 after starting the season ranked 10th.

“They’re fighting, they’re defending, they’re rebounding,” Calipari said Monday during a teleconference. “We turn it over too much, we’re working on that. The biggest thing, we miss a lot of shots, but our execution on offense has got to get better and we got time to continue to work on it.”

“But I haven’t lost any faith in the team. ... Most of it is self-inflicted, but I’m happy they’re fighting.”

Kentucky’s stumble has sparked concerns in the Bluegrass state that college basketball’s winningest program could miss the NCAA Tournament for the first time since 2013. At the other extreme, frustrated followers on social media and sports talk radio have questioned the caliber of a consensus No. 1 recruiting class, Calipari’s reliance on these highly touted freshmen, the “one-and-done” culture and even his coaching.

There's no question a confluence of events has hit Kentucky hard.

While overhauling the Wildcats roster has been an annual ritual for Kentucky under Calipari, this year’s squad returned just one regular (injured forward Keion Brooks Jr.) and welcomed seven freshmen among 10 newcomers. But unlike other years where players spent the offseason transitioning to college and getting to know each other, pandemic precautions have limited contact and workouts and whacked early November tune-ups intended to build confidence and chemistry.

A smooth season-opening rout of Morehead State has given way to a slide during which the Wildcats have struggled against the likes of Richmond, Kansas and North Carolina, all of whom have either been ranked or have received Top 25 votes.

Kentucky has lacked cohesion and been unable to establish consistency in the losses.

The Wildcats are shooting just 41%, ranking 259th of 329 Division I teams, including 25% from beyond the arc. Kentucky has 24 more turnovers than opponents and has offered little defensive resistance. Archrival Louisville outscored the Wildcats 32-24 in the paint during Saturday’s 62-59 victory for Bluegrass bragging rights.

But as bad as the record is, there have been rays of hope.

The Wildcats have twice been a basket away from taking the lead late in games. Calipari is hopeful those shots will eventually start falling, once his team settles down and learns how to take care of the ball.

That will require the Wildcats to mature under increasing scrutiny — an apparent ongoing concern.

Brooks, a sophomore who has yet to play, handled postgame interviews following a 64-63 loss to Notre Dame in place of younger teammates who took the defeat hard. TV cameras caught freshman forward Cam’Ron Fletcher, possibly upset about a lack of playing time, showing his frustration on the bench. He later apologized on Twitter for the episode.

Calipari asked Fletcher to temporarily step away from the team for self-examination and made clear in his own series of tweets the program's culture of changing and maturing individuals. Fletcher returned this week and Calipari said he has designated three players to handle attitude issues — but the coach did not identify them.

On the court, that leadership role falls to guard Davion Mintz, a graduate transfer from Creighton.

“Right now, it’s kind of a necessity for me to be that guy to come out there and be the voice and kind of talk on both sides of the floor,” said Mintz, who leads Kentucky with 19 assists and is third in scoring at 10.3 points per game.

“We all want to win," he added. “None of us would have imagined this. We’ve just got to keep fighting.”

No one predicted this. And turning it around won’t be easy with an 18-game Southeastern Conference slate set to begin Saturday at Mississippi State.

The Wildcats have extra time to prepare for the Bulldogs with the postponement of Tuesday night’s SEC opener against South Carolina because of positive COVID-19 tests and protocols within the Gamecocks’ program.

MSU coach Ben Howland expects Kentucky to play much better than its record suggests when the teams meet this weekend.

“It’s not like they’re starting off with a bunch of cream puffs and building their way up,” Howland said. “I mean, they do the same thing every year. ... They’re going to have success. We just hope that when we play them, we get a chance to beat them.”