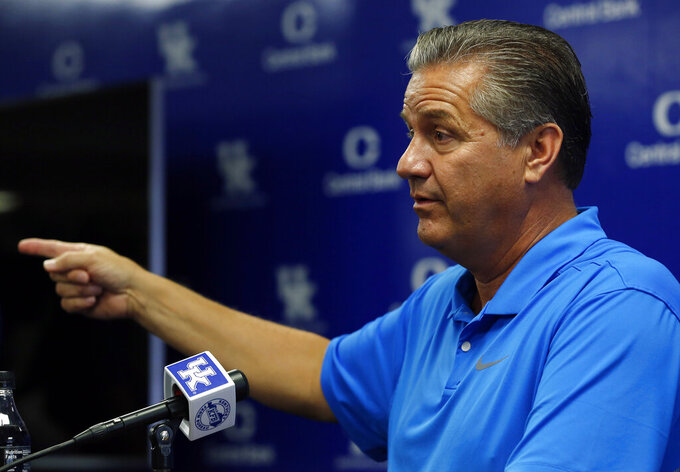 LEXINGTON, Ky. (AP) — Kentucky's Ashton Hagans showed he was one of the most promising guards in college basketball last year, playing tough on-ball defense and his ability to distribute the basketball.

Now, he needs to be a better scorer and the Wildcats might need his leadership more than anything else.

The Southeastern Conference's co-defensive player of the year is Kentucky's top returning scorer — though he averaged just 7.7 points per game. He is the lone starter among four returning veterans.

Kentucky's eight newcomers include freshmen guards Tyrese Maxey, Johnny Juzang and Dontaie Allen — who is sidelined with knee and shoulder injuries — and junior walk-on transfer Riley Welch. Wildcats coach John Calipari notes that Maxey and Hagans are "going right at each other" during preseason practices, with his veteran point guard enjoying the challenge and the verbal exchanges.

"It's just being more vocal and showing guys the right way," said Hagans, who averaged 4.3 assists per contest with 61 steals. "We've got four guys back with a leadership role on this team and that's what we'll need to be at our best."

Kentucky lost forward PJ Washington and guards Tyler Herro and Keldon Johnson to the NBA draft. That trio combined for 42 points per game, creating a huge offensive void to fill.

Calipari hinted he might play a three-guard alignment with Immanuel Quickley. There's little question Hagans will have the ball often after he handed out 160 assists and provided stability during Kentucky's run to the NCAA Tournament Elite Eight.

The coach believes Hagans is ready and has returned to school more self-assured.

"Every kid that comes in here, their first year there's anxiety," Calipari said during Tuesday's annual media day. "At times there's (what) I call it a fake swagger. You're scared to death but you're acting like you're not.

"In that second year, if you're honest with yourself, if you're not delusional and you know what's expected and you're confident that you're trained to do it and grow like Ashton is right now, I mean he's got a different way about him. You can just see it."

Offseason weight training has helped, though the Cartersville, Georgia, native can't say how much bulk has been added to his 6-foot-3, 198-pound frame. The work seems most obvious in his legs, though his biceps frequently contracted as he situated himself in a chair for interviews.

"I've just tried to stay with Rob, get some extra work in if I can," Hagans said, referring to workouts with strength and conditioning coach Robert Harris. "I just work real hard in the weight room so I can bring that aggressiveness on the court on the defensive end."

Hagans' goal is converting all his offseason work into more points.

He shot 47% last season but made just 28% from 3-point range and struggled with inconsistency down the stretch. He has worked this offseason to improve finishing at the basket while showing more confidence in his jumper.

"His game has always been really good, but his jump shot's improving," Quickley said. "He's always been good at getting people involved. He's found a balance of being selfish and unselfish, and when I say selfish that's being a good thing because we need him to get buckets as well as pass. He's done a good job at both."

Hagans' steals total tied for the third most by a Wildcats freshman in program history. He also grabbed 96 rebounds while starting the final 29 games and went on to share SEC defensive honors with LSU's Tremont Waters.

He won't change his defensive mindset, but makes it clear he aims to take advantage on his chances more often this season.

"It's just working with a coach daily, listening to them to see what they can do to help and trying to get better," Hagans said. "A lot of things take time, so I've just been trying to get in the gym and keep getting up shots."