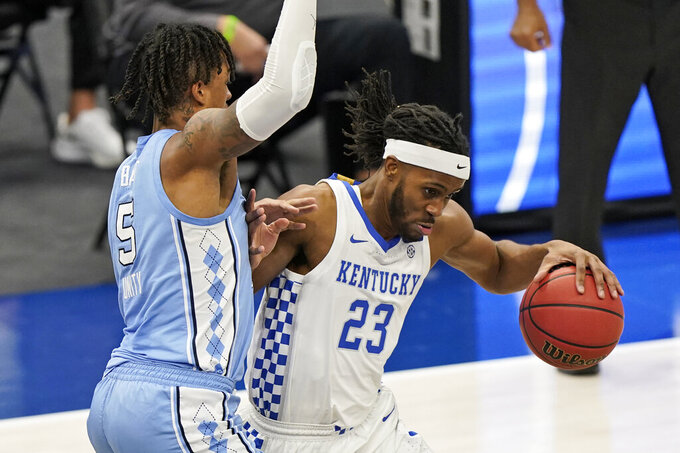 A look at the upcoming week around the Southeastern Conference:

GAME OF THE WEEKEND: Kentucky at Louisville, though there's scant competition. The Wildcats have dropped five games in a row for the first time since John Calipari took over in 2009. They're off to their worst start since the 1926-1927 season. But Kentucky has won 11 of the last 13 meetings with its in-state rival, including a 78-70 overtime victory last Dec. 28. Louisville returned from a lengthy break due to coronavirus problems with a 85-48 humbling by No. 9 Wisconsin while playing without Cardinals leading scorer Carlik Jones. Both teams have tumbled from the Top 25, with the Wildcats having opened at No. 10. The only other weekend game with an SEC team is Vanderbilt against Alcorn State on Sunday.

LOOKING AHEAD: League games start next week with No. 8 Tennessee's visit to 14th-ranked Missouri on Wednesday night as the headliner. SEC matchups start Tuesday with Texas A&M visiting LSU and Mississippi at Alabama. South Carolina's game at Kentucky has been called off because of COVID-19 issues within the Gamecocks program. The SEC has scheduled league games through March 3 with a window after that for makeup games Tennessee was the preseason favorite to win the league followed by Kentucky, LSU, Florida and Alabama.

The league has taken some hits from non-Power 5 teams, including Auburn’s loss to UCF, Kentucky to Richmond, LSU to Saint Louis and both Mississippi State and South Carolina falling to Liberty. Richmond also beat Vanderbilt. But SEC teams went 6-1 Tuesday night, a record marred only by Davidson's 85-65 win over the Commodores.

PLAYERS TO WATCH: Georgia's Toumani Camara, the reigning SEC player of the week, is averaging 17 points and 9.8 rebounds over the last five games. He scored 12 of his 13 points in the second half against Northeastern and collected eight rebounds.

INSIDE THE NUMBERS: Tennessee and Missouri are the only ranked SEC teams with conference games approaching. Four teams are receiving votes: Arkansas, Florida, Georgia and LSU. ... LSU has the league's No. 2 and No. 3 scorer. Cameron Thomas is averaging 21.6 points per game. Trendon Watford is scoring at an 18.8-point clip. Georgia's 5-foot-10 guard Sahvir Wheeler is averaging 13.7 points and a league-best 7.4 assists. Nobody else in the league is dishing out five assists per game. ... Georgia outscored Northeastern 44-13 in the second half to overcome a 15-point deficit.

ON THE WOMEN’S SIDE: The SEC women's teams mostly got the week off before with a few tune-up games early next week before league play. All 14 teams will be in action on New Year's Eve when SEC games tip off. Unlike the men, five SEC women's teams are ranked: No. 5 South Carolina, No. 9 Texas A&M, No. 11 Arkansas, No. 12 Mississippi State and No. 13 Kentucky. Auburn's Unique Thompson is leading the nation with an average of 15.3 rebounds per game.