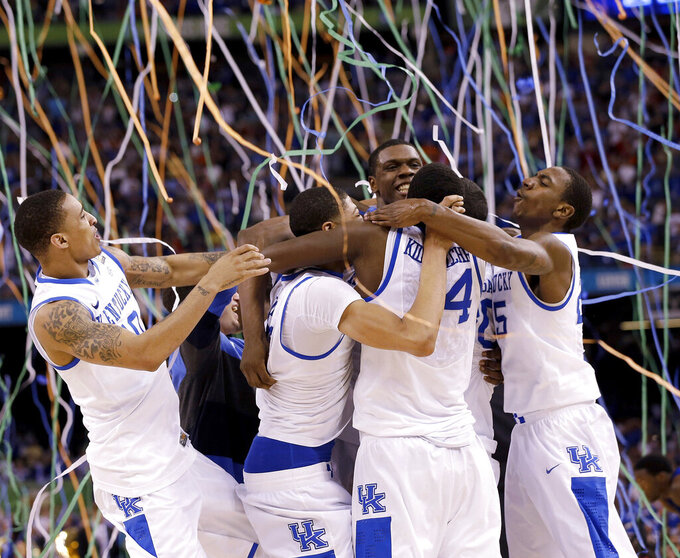 The decade of college basketball started with Duke outlasting Butler in an epic national title game and ended with Virginia earning redemption after being on the wrong side of history the year before.

Two great teams, but were they good enough to be among the five best of the 2010s?

The Associated Press asked its Top 25 voters to decide and here's what the 26-person media panel decided:

John Calipari has built plenty of talented teams in Lexington. The 2011-12 crew may be his best.

Led by long freshman Anthony Davis, the Wildcats tied an NCAA record with 38 victories, lost twice all season — by a combined eight points — and won the program's eighth national title.

The 6-foot-10 Davis took command without needing to score, changing games with his defensive abilities and rebounding prowess. Athletic small forward Michael Kidd-Gilchrist and guard Marquis Teague joined Davis in proving that a freshmen-led team could win it all.

That Kentucky team also had future NBA draft picks Terrence Jones, Doron Lamb and Darius Miller, so you know it was loaded.

The Wildcats romped through the NCAA Tournament, winning six games by no fewer than eight points. Kentucky beat Kansas 67-59 in the title game behind Davis, who had six points but dominated in every other facet, finishing with 16 rebounds, six blocked shots, five assists and three steals.

The Wildcats got the most votes for the all-decade team, appearing on 21 ballots.

The Wildcats earned their first NCAA title under coach Jay Wright in 2016 when Kris Jenkins answered Marcus Paige's improbable 3-pointer with a buzzer-beater to knock off North Carolina.

The 2018 team didn't need any buzzer-beaters. The Wildcats simply blew every team off the court.

Let by national player of the year Jalen Brunson, Villanova won all six of its NCAA Tournament games by double digits and turned the title game into a walkover with a 79-62 victory over Michigan.

Brunson was the undisputed leader, doing whatever it took to get his team a win. Mikal Bridges and Donte DiVincenzo gave the Wildcats a scoring boost — DiVincenzo by scoring 31 points in the title game. Omari Spellman changed games with his defensive presence. Eric Paschall and Phil Booth, holdovers from the 2016 team, provided the veteran presence.

Together, they dominated like few teams in recent history.

Talk about a redemption story.

A year earlier, Virginia was embarrassed in the first round of the NCAA Tournament by Maryland-Baltimore County, becoming the first No. 1 seed to lose to a No. 16.

The Cavaliers were determined to make a new kind of history the next season and followed through on it.

Let by the talented trio of Kyle Guy, De'Andre Hunter and Ty Jerome, Virginia lost twice during the regular season to share the ACC title with North Carolina. After losing to Florida State in the ACC Tournament, the Cavaliers suffered a couple of close calls in the NCAA Tournament.

The first came in the Elite Eight in one of the decade's best games, an 80-75 overtime win over Purdue. In the Final Four against Auburn, Virginia was all but finished before Guy was fouled with 0.6 seconds left and made three clutch free throws for the 63-62 win.

The Cavaliers beat Texas Tech in overtime in the title game to earn their first national championship a year after making ignominious history.

Winning national titles with one-and-done players has been a rarity. The 2014-15 Blue Devils, like Kentucky in 2012, proved it can be done.

Duke coach Mike Krzyzewski landed a stellar recruiting class in 2014 and relied heavily on it all season.

Big man Jahlil Okafor, who would be the third overall NBA draft pick the next season, led the way. Freshmen Justise Winslow and Tyus Jones also were big contributors and Grayson Allen, who would later become Duke's top player, had a bit part.

The freshmen didn't shy away from the spotlight of the NCAA Tournament, helping the Blue Devils blow out Michigan State in the Final Four. Once in the title game, the Blue Devils absorbed every blow from Wisconsin in a fantastic final to win their fifth national title.

The Tar Heels had a bit of redemption of their own in 2017.

The year before, North Carolina lost in the national title game to Villanova on Jenkins' buzzer-beating 3-pointer. The Tar Heels fought all the way back to the championship game the following season and came through, making all the big plays down the stretch to beat Gonzaga 71-65.

They did it with experience. Justin Jackson, Joel Berry, Kennedy Meeks and Isaiah Hicks were all upperclassmen, so they had been through it before.

North Carolina lost to Duke in the ACC Tournament but cruised through the first three rounds of the NCAA Tournament. The experience paid off in a two-point win over Kentucky in the Elite Eight, a one-point victory over Oregon in the Final Four and the tight title game against the Zags.

The title was North Carolina's sixth but first since 2009.