Kentucky's Tshiebwe wants 'my name to be remembered forever' 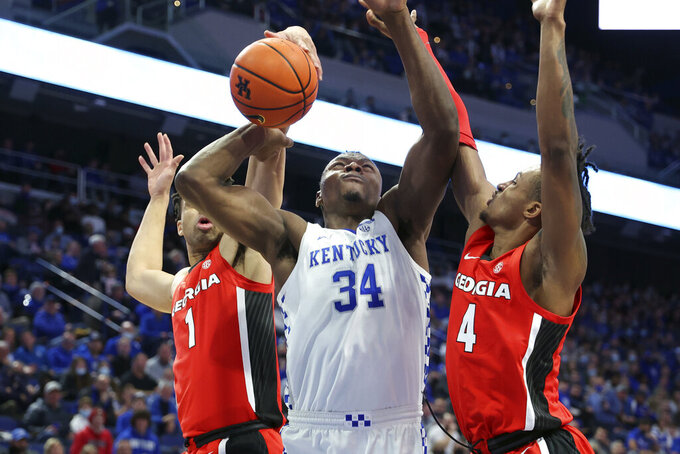 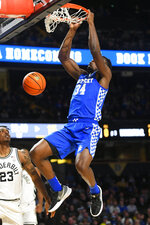 Already leading the nation in rebounding, Tshiebwe (SHEE-bway) set career highs in scoring in consecutive games for the 18th-ranked Wildcats (13-3, 3-1 Southeastern Conference). He had 30 points and 13 rebounds in a lopsided victory at Vanderbilt on Tuesday night, three days after finishing with 29 points and 17 boards against Georgia.

Back-to-back eye-openers should have Tshiebwe’s NBA draft stock on the rise.

“I wouldn’t say I was surprised, but sometimes we’ve got to take the time to appreciate what somebody really does,” teammate and Keion Brooks said. “And Oscar has been tremendous for us all year and playing exceptionally well.”

A 22-year-old junior from the Congo, Tshiebwe began his college career at West Virginia. He left in the middle of his sophomore season for personal reasons and ended up transferring to Kentucky. Coach John Calipari believes Tshiebwe can give the Wildcats a post presence they missed last season.

Tshiebwe hopes to do way more.

STRENGTHS: Tshiebwe is running the floor like never before and getting easy baskets in transition. While his hands seemed suspect early in the season, he’s shown great touch around the rim in recent weeks – on both ends of the floor.

“We had a game a couple of games ago where he graded out, on his sprints, the worst he had all season,” Calipari said. “So now, I’m focused on him running that floor. It puts him ahead of the action. He’s going to get some easy ones. He’s in a great position to rebound.”

WEAKNESSES: For an athletic big man with a big body, Tshiebwe isn’t much of a shot blocker. He hasn’t had more than two in any game since early December and only has 23 in 466 minutes this season.

He also needs to continue to develop his post skills and extend his range.

DRAFT PROJECTION: Once considered a second-round project, Tshiebwe is climbing draft boards and could end up being a mid-first-rounder by the time the draft arrives in July.

F JABARI SMITH, AUBURN: The 6-10 freshman from Fayetteville, Georgia, could be the No. 1 pick in the 2022 NBA draft if he decides to turn pro. Smith scored a season-high 25 points in a victory over No. 24 Alabama on Tuesday. He also had seven rebounds, four blocked shots and two steals. He can shoot, dribble and play defense.

G JADEN SHACKELFORD, ALABAMA: The smooth-shooting left-hander leads the league in 3-pointers made (51) and attempted (133). The 6-3 junior is averaging 16.1 points – tied for sixth in the league – and 5.9 rebounds a game.

G KENNEDY CHANDLER, TENNESSEE: The 6-1 freshman from Memphis, Tennessee, ranks fifth in the SEC with 71 assists to go along with 13.4 point a game. He’s an efficient ball handler, making smart decisions in pick-and-roll situations, and has the speed and shooting range to be a dynamic point guard in the NBA.