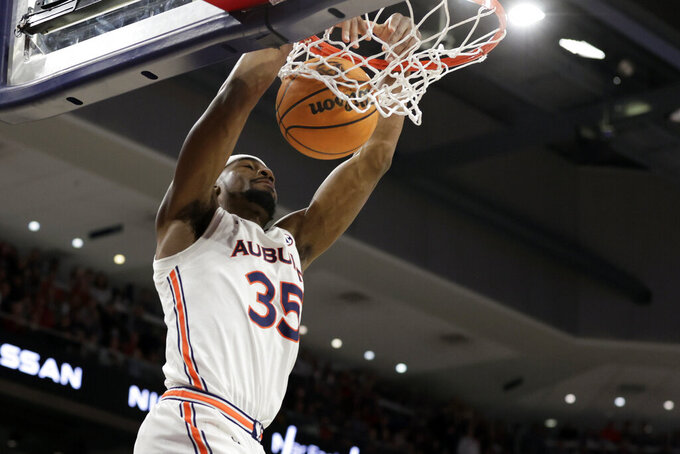 Auburn guard Devan Cambridge (35) dunks the ball during the second half of an NCAA college basketball game against Oklahoma Saturday, Jan. 29, 2022, in Auburn, Ala. Auburn beat Oklahoma 86-68. (AP Photo/Butch Dill)

AUBURN, Ala. (AP) — Bruce Pearl and Auburn have an embarrassment of front-court riches.

The second-ranked Tigers have the nation's top shot blocker in 7-foot-1 Walker Kessler along with 6-10 freshman Jabari Smith, who also happens to be Auburn's top 3-point shooter.

Then there are the three other big men coming off the bench, two of whom were starters last season.

The two new big men are major reasons why the Tigers are leading the Southeastern Conference by two games entering Saturday’s visit to Florida. They are the foundation of why Auburn recently spent three weeks at No. 1, its first ascent to the top of the rankings.

Smith is the team’s top scorer and 3-point shooter and a likely NBA draft lottery pick, potentially even No. 1 overall. The freshman is averaging 15.8 points and 6.7 rebounds while hitting 41.9% from 3-point range.

Smith demonstrated his shooting range with a career-best 31 points and seven 3-pointers Wednesday night against Vanderbilt.

Kessler, a sophomore and North Carolina transfer, has been a huge presence literally and figuratively inside for the Tigers. He is the nation’s top shot blocker, averaging 4.73 per game, and stands only three blocks shy of Kyle Davis’s school single-season record of 126 set in the 2002-03 season.

Kessler is averaging 12.0 points and a team-best 8.4 rebounds per game. He’s also one of only five Southeastern Conference players with multiple career triple doubles, a group led by Shaquille O’Neal’s six.

“No doubt in my mind that our frontcourt collective is the best frontcourt in the nation or one of the best,” Kessler said.

He has blocked at least seven shots seven times already. The 6-8 Horace Spencer is the only other Auburn player to have seven blocks in a game during Pearl’s nearly eight-year tenure and that was six years ago.

That squad was led by sharp-shooter Bryce Brown and point guard Jared Harper. The versatile 6-8 Chuma Okeke, who was a first-round NBA draft pick, was the tallest starter with Austin Wiley coming off the bench.

Like Okeke, Smith gives Auburn a frequent mismatch on the perimeter.

Kessler and Smith are the unquestioned front-court stars but they have capable and sometimes explosive backups, too.

— The 6-8 Jaylin Williams started every game last season and was a double-digit scorer. He’s supplying 6.2 points and 3.0 rebounds a game while playing 15 minutes.

— The 6-6 Devan Cambridge started much of last season and is averaging similar numbers (6.1 points, 3.7 boards) to Williams. His nine offensive rebounds at Missouri were the most by any Auburn player in 20 years. Cambridge has also supplied some highlight-reel dunks.

— Dylan Cardwell is a 6-11 shot-blocker who ranks fifth in the SEC in that category despite averaging less than 12 minutes a game.

“We’ve got people who are just as good as us coming in. It takes the pressure off us. It’s fun.”