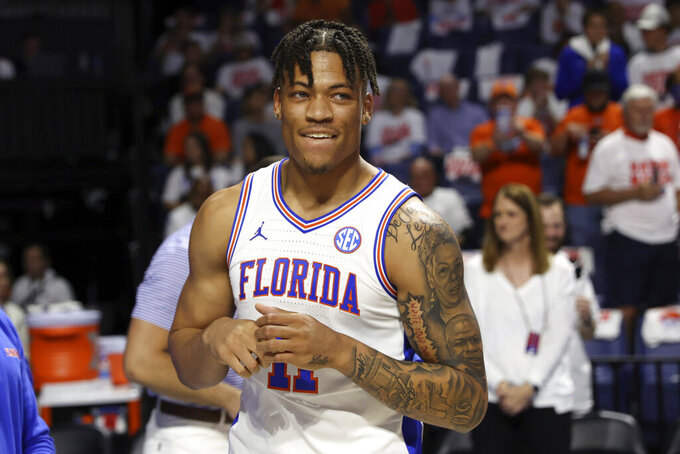 FILE - Florida forward Keyontae Johnson (11) smiles after being introduced as a starter before the first half of an NCAA college basketball game against Kentucky, on March 5, 2022, in Gainesville, Fla. Johnson, who collapsed during a game in December 2020, is headed to Kansas State to resume his college career. Johnson made the announcement on social media on Saturday, Aug. 20, 2022, and chose the Wildcats over fellow finalists Memphis, Nebraska and Western Kentucky. (AP Photo/Matt Stamey, File)

GAINESVILLE, Fla. (AP) — Former Florida forward Keyontae Johnson, who collapsed during a game in December 2020 and hasn’t played since, is headed to Kansas State to resume his college career.

Johnson made the announcement on social media Saturday, picking the Wildcats over fellow finalists Memphis, Nebraska and Western Kentucky. The 23-year-old Norfolk, Virginia, native will have one year of eligibility remaining, although he could petition the NCAA for another.

“We are just so excited to welcome Keyontae and his family to K-State,” Tang said in a statement. “He is a gifted player and a winner who brings significant experience to our team after playing in one of the toughest leagues in the country while at Florida. Beyond that, we think Keyontae is just a perfect fit with the guys we already have in the program. We can’t wait to get him to Manhattan and introduce him to Wildcat Nation!”

Johnson has indicated he has received medical clearance to play again, something Florida officials said wasn’t going to happen in Gainesville. Now, he will get a chance to face his former team next season; K-State hosts the Gators on Jan. 28 in the annual SEC-Big 12 Challenge.

The 6-foot-5, 230-pound Johnson could be a potential difference-maker for the Wildcats, who are rebuilding under Tang after finishing 14-17 in coach Bruce Weber’s final year in Manhattan. Johnson averaged 14 points and 7.1 rebounds during his last full season (2019-20) at Florida. He was a first-team, all-Southeastern Conference selection as a sophomore.

He still has a $5 million insurance policy that would pay out if he never plays again. The policy allows him to take part in a handful of games to test his health. If he proceeds beyond the set number of games, any potential payout would be nullified.

Johnson’s insurance policy went into effect five months before he crashed face-first onto the court at Florida State. The Southeastern Conference’s preseason player of the year in 2020 became a trauma patient as he crumpled to the floor seconds after breaking a team huddle in the fourth game of the COVID-19-delayed season.

Johnson received emergency medical attention in front of teammates, opponents and fans before getting rushed to a Tallahassee hospital. He spent 10 nights in hospitals before returning home. But he was never allowed to return to practice with the Gators.

His parents said last year their son’s collapse was not related to a previous positive COVID-19 test, citing a consultation team that included experts from four highly respected schools of medicine. The family has not said what doctors believe caused the episode or whether Johnson has an implantable cardioverter defibrillator.

Johnson spent most of the last two seasons cheering on teammates from the bench as he remained enrolled in school and on scholarship.

He did take the court for a ceremonial few dribbles and a farewell on senior night against Kentucky in early March.