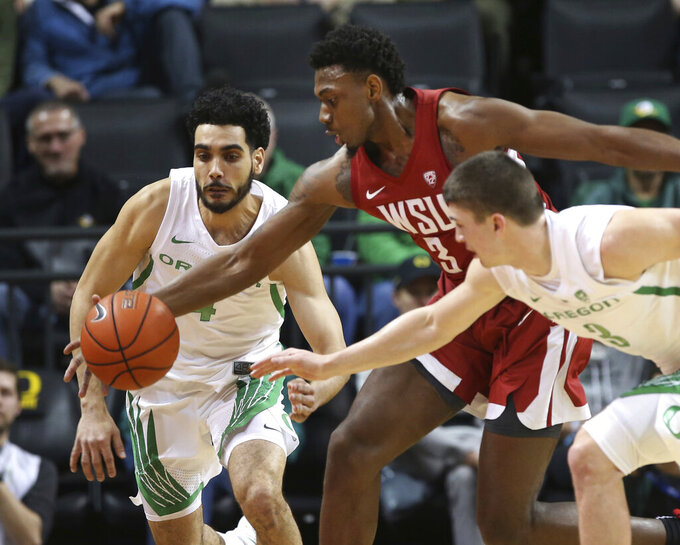 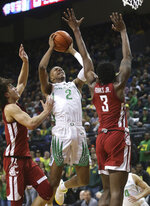 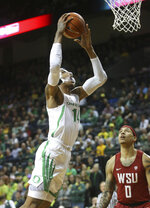 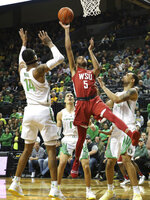 The video session then played a part in Wooten's best offensive game of the season for the struggling Ducks.

Louis King scored 13 of his 22 points in the second half and Wooten matched his career high with 20 to help Oregon rally past Washington State 78-58 on Sunday night.

Wooten and Walton chatted courtside for several minutes after Thursday night's loss to Washington. The Ducks had squandered another late lead by giving up the last 10 points, and Wooten scored just two.

"I talked to him for quite a while," Wooten said. "I decided to watch a little bit of him and I started watching a lot of (his) post work and stuff he told me to look up. I just decided to really focus on it."

Paul White added 18 points for the Ducks (12-8, 3-4 Pac-12), who came back from a four-point halftime deficit to end a two-game losing streak and avoid a fifth home loss of the season.

Oregon went ahead for good at 48-44 on two fast-break baskets by King off WSU turnovers as the Ducks opened the second half on a 13-5 run. They finished the game the game on a 20-5 run over the final 8:20 that included 10 straight points.

Wooten went 8 for 10 on the night and had 14 points in the second half, many of them coming from roaming the baseline behind WSU's defense.

"We were just looking for the lanes under their zone," Wooten said, "and we ended up being successful in the second half."

The 6-foot-9 sophomore known more for his shot blocking had three more against the Cougars, but Oregon coach Dana Altman had been encouraging him to become an offensive force, too.

"I've been talking to him a lot about being more aggressive and not being afraid to take (a shot)," Altman said. "He'd miss a couple and he doesn't want the ball, and I told him that none of our other guys have that problem."

Robert Franks had 19 points to lead the Cougars (8-12, 1-6), who lost their third game in a row and ninth of their last 10. CJ Elleby added 15 points, eight rebounds and seven assists, and Jeff Pollard had 10 points.

Washington State appeared to be in position for its first win in Eugene in 10 years.

"That's the best basketball we've played all year in the first half by far," coach Ernie Kent said. "We've just got to understand how to put two halves together.

"Both our offense and defense were outstanding in the first half. We got away from that in the second half and they took full advantage of it."

The Ducks, however, converted seven WSU turnovers into nine points to keep contact, led by King with nine points and White with eight, despite shooting 14 of 29 (48.3 percent).

Washington State couldn't sustain any offense in the second half after giving the Ducks all they could handle in the first. The Cougars got just five points from starting guards Ahmed Ali and Viont'e Daniels, who went scoreless in 23 minutes.

Oregon rebounded from another stinging loss with a solid second half, thanks to King and Wooten. King, the five-star freshman, has taken over the Ducks' scoring lead from Payton Pritchard in the absence of Bol Bol.

Oregon's starting backcourt of Pritchard and freshman Will Richardson combined for 14 assists with no turnovers. The Ducks had 21 assists on 30 field goals with only seven turnovers, and Pritchard had six of their 10 steals.

Richardson and King hooked up on back-to-back fast breaks that put the Ducks ahead to stay early in the second half. The first, a soaring one-handed jam by King, was the last of nine lead changes.

Pritchard, a junior, became the sixth Oregon player with 1,000 points and 400 assists for his career, joining Ron Lee, Aaron Brooks, Luke Ridnour, Luke Jackson and Kenya Wilkins. Lee and Ridnour also reached those marks in three seasons. . The Ducks started three freshmen for the first time and their seventh different lineup this season. . Scouts for five NBA teams were on hand to see King, a likely one-and-done candidate, and Franks, who declared for last year's draft before choosing to return to Pullman.

Oregon: At Utah on Thursday night.