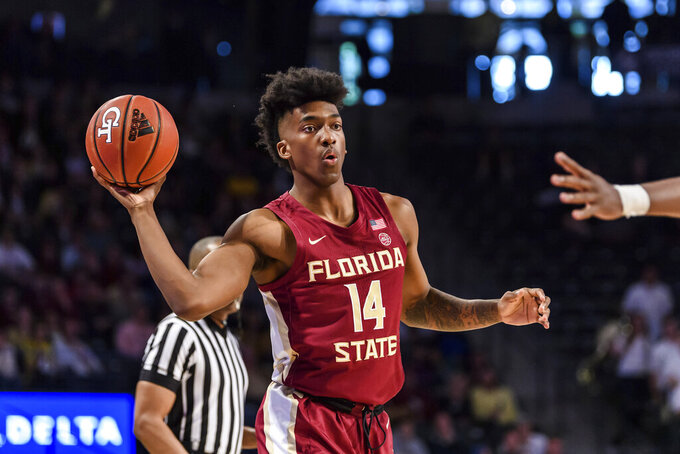 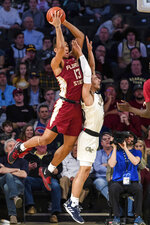 Koumadje had 10 points and 12 rebounds as the Seminoles tied a school record with their seventh straight ACC win, 69-47 Saturday.

Freshman Devin Vassell came off the bench to score a team-high 11 while playing in his hometown for the Seminoles (20-5, 8-4). Seven Florida State players scored between seven and 11 points.

Jose Alvarado broke out of a lengthy slump with 17 points, but the Yellow Jackets made just 8 of 36 shots from inside the 3-point arc. They're averaging 53.1 points in their skid after their seventh and eighth halves scoring 25 or fewer points.

The 7-foot-4 Koumadje took just seven shots, making five. He was even more of a factor on the defensive end as he blocked three shots as Tech made just 6 of 28 in the paint. The Jackets' big men, James Banks III (two points) and Abdoulaye Gueye (five) made a combined 3 of 16.

Florida State coach Leonard Hamilton said the Jackets play, "probably the best match-up zone scheme that I've seen in my coaching career." While the Seminoles shot 39.1 percent, the Jackets' imbalance on the offensive end saw them fall behind by as many as 27 in the second half.

The teams were tied at 10 early before the Jackets fell into the first of multiple shooting freezes, and Florida State stretched the lead to 31-15 on a layup by Terance Mann with 4:27 left.

Phil Cofer, David Nichols and Vassell each a pair of 3-pointers in the first half for FSU before Banks finally got loose for a dunk shortly before halftime to pull Tech within 34-23.

Hamilton said his team "crowded" Gueye with frequent double teams on most of his possessions. When Tech stationed Banks at the high post, the Seminoles sagged off him and let him shooter jumpers.

"Our guys give everything they have on the defensive end ... we give ourselves a chance," Tech coach Josh Pastner said. "We have just had a real issue with scoring."

Tech often doubled Florida State leading scorer Mfiondu Kabengele, who had eight points on 2 of 5 shooting, but Mann wasn't surprised by his team's offensive balance, nor that Vassell became the ninth player this season to lead Florida State in scoring.

"Christ is coming into his own," Mann said after having seven points and eight rebounds in a game where the Seminoles had a 50-38 rebounding edge. "That's just what we do. We're 18 strong. Every night it's different."

Tech played without sophomore forward Evan Cole, an occasional starter, and assistant Julian Schwartz was not at the game because they're both fighting flu-like symptoms. Pastner said, "I didn't know until this morning if (Alvarado and starting guard Michael Devoe) were going to play. They weren't able to practice the last couple days."

Florida State: The first time the Seminoles put together a seven-game ACC winning streak, in the 2011-'12 season, they went on to win the ACC Tournament. This also cemented a fourth consecutive season with 20 or more wins overall, matching a run from 2009-'12 that also was under Hamilton.

Georgia Tech: The Jackets keep churning their lineup, as freshman forward Kristian Sjolund made his first start and sophomore Moses Wright started for the first time in more than a month. Sjolund scored 19 points in Tech's previous two games after scoring just nine combined all season before that, and he can shoot. They were replaced to start the second half by Gueye and Brandon Alston. Sjolund had 11 points, including 3 of 7 3-pointers, and Wright scored two.

Georgia Tech: Will be at home Wednesday against Pitt.