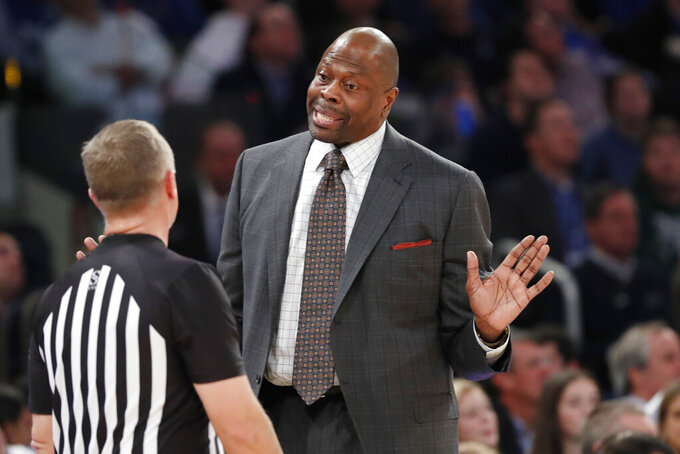 Georgetown coach Patrick Ewing objects to a call as he talks to an official during the first half of the team's NCAA college basketball game against Duke in the 2K Empire Classic, Friday, Nov. 22, 2019 in New York. (AP Photo/Kathy Willens) 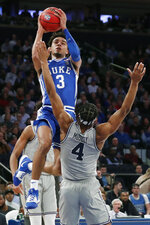 NEW YORK (AP) — Patrick Ewing had already yanked off his tie, and soon he needed to be restrained by the Georgetown coaching staff to keep from getting tossed. Ewing was hot, the Hoyas were unraveling and the crowd at Madison Square Garden was absolutely howling over the chaos on the court.

Keeping its cool in the other huddle, top-ranked Duke was waiting to pounce.

“It was kind of crazy out there for a little bit,” Duke guard Tre Jones said.

The Blue Devils are used to playing big games at the Garden, while the improving Hoyas are still finding their way.

Mike Krzyzewski set the record for wins coaching a No. 1 team as top-ranked Duke got 20 points and 10 rebounds from Vernon Carey Jr. to beat Georgetown 81-73 on Friday night.

The Blue Devils (6-0) beat Cal and the Hoyas on consecutive nights to win the 2K Empire Classic and give Krzyzewski another slice of history. Krzyzewski is 218-34 when the Blue Devils hold the top spot, a mark they hit this week in The Associated Press poll. Hall of Famer John Wooden went 217-11 while UCLA was No. 1 during his run there.

When Jones and Carey were asked to describe what it’s like to play for Krzyzewski, the Hall of Fame coach interjected, “great.”

The Blue Devils looked it in long stretches against a Hoyas (4-2) team that made them grind for it in front of a lively crowd at the Garden.

Carey, a five-star recruit who inherited Zion Williamson's No. 1 jersey, has become the focal point of Duke's offense, and he had a breakthrough in New York. Carey dunked, screamed, chest-bumped and controlled the game for the Blue Devils to help keep them undefeated.

Cassius Stanley, who led the Blue Devils with 21 points, made a pair of 3s to stretch the game open and shake off Georgetown, which was looking to knock off two straight Top 25 teams. The Hoyas, picked to finish sixth in the Big East preseason poll, knocked off No. 22 Texas a night earlier and went basket-for-basket with Duke in the first half.

It was a mixed homecoming for Ewing, the Knicks great whose No. 33 hangs in the rafters.

The Hoyas were positioned to pull off an upset until the game started to get away from them in the middle of the second half. Ewing tossed the tie and lost his cool moments later, stomping his feet and getting hit with a technical for an outburst over a perceived missed call. Georgetown assistant Louis Orr, another former Knick, restrained Ewing from going on the court and possibly getting tossed. Ewing barked at Orr to get out of his way.

On his way to the locker room, Ewing could be heard yelling, “You can blame the officials. They (screwed) me.”

He was more subdued in his postgame press conference.

“I thought a couple of calls didn't go our way that I thought should have gone our way,” Ewing said.

“Patrick and I are not good friends, we are great friends,” Krzyzewski said.

The Garden belonged to Ewing, the crowd going wild from the moment he walked out for warmups to his introduction during starting lineups. Perhaps motivated by nostalgia or Big East boosterism, the Hoyas had the fans on their side and the game in control. Mac McClung, James Akinjo and Galen Alexander hit early 3s to push the Hoyas to an 11-point lead. This was no staid Princeton offense the Hoyas were running to stymie Duke. They pushed, they scored in transition, they outrebounded the top team in the nation and an upset appeared quite possible.

“The way we started the game was tough to come back from, especially with the atmosphere out there,” Jones said.

The Blue Devils hung tight, and Joe Baker hit a 3 that pulled them within three. Carey pulled them even with a thunderous two-handed jam and gave them a lead on a tip-in. Carey threw his head back and screamed, the Hoyas went 6 minutes without a field goal and the teams went to halftime tied 33-all.

Georgetown: The Hoyas put college hoops on notice that they will not be an easy out this season, and perhaps their first NCAA Tournament berth since 2015 is within reach. Ewing certainly opened some eyes in his return to the Garden.

“I think at the end of the year, there's going to be a lot of teams afraid to play us,” Ewing said.

Duke: The Blue Devils will retain their No. 1 spot in the AP Top 25 poll.

Georgetown: The Hoyas have a short break and play UNC Greensboro on Nov. 30 at Capital One Arena.