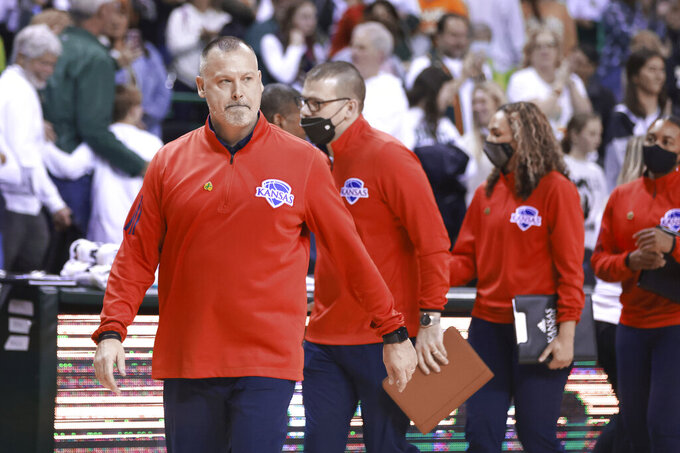 LAWRENCE, Kan. (AP) — Brandon Schneider signed a new four-year contract with Kansas on Wednesday that will pay the Big 12 coach of the year $400,000 annually along with numerous benefits and incentives through the 2025-26 season.

Schneider led the Jayhawks (20-8) to a fifth-place finish in the Big 12 this season after they were voted last in the league's preseason poll. They won seven straight games earlier this season, the program's longest streak since 1997, and the 20 wins in the regular season were their most since the 1999-2000 season.

“Brandon has worked tirelessly to get this program back to where it should be competing at the highest level of the Big 12 with an opportunity to make a statement deep into March,” Kansas athletic director Travis Goff said. "Brandon has also assembled an outstanding coaching staff that leads, mentors and develops our young women both on and off the court.

“While we love the progress on the court, our emphasis at the University of Kansas extends to the character of the head coach, the way in which they lead and develop our student-athletes in a comprehensive way, as well as how they represent our program day-in and day-out. That combination is why we are so excited to sign Brandon to a new four-year contract.”

The 50-year-old Schneider, who was making $300,000 annually on his previous contract, is 81-123 and had never finished better than ninth in the 10-team Big 12 in six previous seasons at Kansas. He also spent 12 years at nearby Emporia State, winning a Division II national title, and had three 20-plus win seasons in five years at Stephen F. Austin.

“It has been a process getting to the point where we are,” Schneider said, “but building things the right way doesn’t always happen as quickly as you would like. We tried to stay the course and stay true to the values and pillars of our program, knowing that one day we would build something that could be very sustainable.”

Other benefits include the use of two courtesy cars, the ability to run summer camps, travel for Schneider's family to one game away from home and four tickets for each football and men's basketball game.

“I am extremely grateful for the support and confidence in the direction of this program," Schneider said in a statement. “The increased support for women’s basketball at the University of Kansas has been tremendous and has made a big impact on the program’s success.”