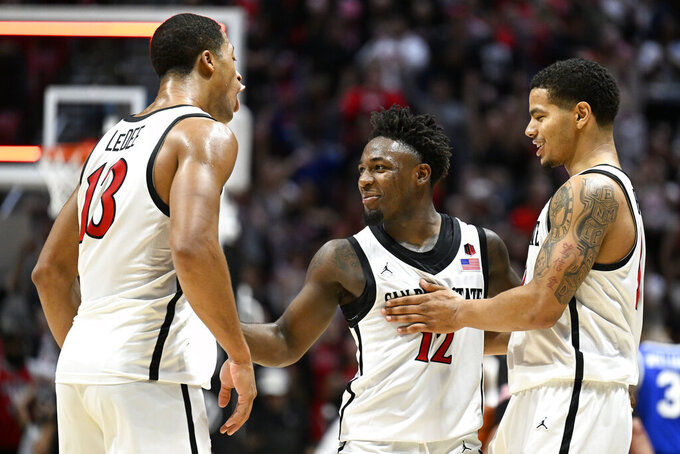 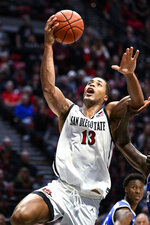 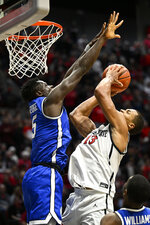 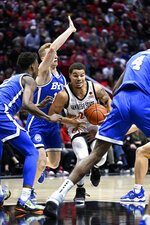 San Diego State led by two with 2 minutes left when Trammell hit a 3-pointer with the shot clock winding down to almost zero. BYU then respond to get back within two with 83 seconds left.

LaDee sealed the game with a layup that gave the Aztecs a five-point lead.

After a lackluster opening half, the Aztecs turned up their offense in the back-and-forth second half, but were unable to solve BYU’s aggressive defense until the final minutes.

“I don’t know if it was poetry, but it was hard-fought basketball,” said Aztecs coach Brian Dutcher. “We’ve worn teams down in the first couple of games. We continue to play hard, even though we don’t play great all the time. We just made enough plays to get a win today.”

Added Dutcher, praising the Aztecs’ boisterous fans: “I don’t know if we’d have won in Provo. Our crowd kind of motivated us down the stretch and got behind us, and we built on that momentum. If we were in Provo, it might be a whole different story.”

For BYU, San Diego State proved to be “a different animal” than Idaho State, the Cougars’ season-opening opponent last Monday, reflecting Pope’s post-game warning to his team after that tight five-point win.

“It kind of got away from us in the last 10 minutes," BYU coach Mark Pope said. "We lost the battle around the rim. It was really hard for us, then Trammell made a couple of big shots. They’re a good team.”

Last Monday, when San Diego State opened its season with a convincing 80-57 win at home over Cal State Fullerton, 14 of its roster players saw action. That wasn’t the case against BYU, as Dutcher went with his core starting lineup, with only four subs coming off the bench.

The Aztecs more than lived up to their preseason billing as a Top 20 team, which gave their raucous 2,000-strong student cheering section known as “The Show” plenty to cheer and jeer about.

Despite the loss, the Cougars retain a 50-27 overall advantage against SDSU. A year from now, the two teams are scheduled to meet in a non-conference game after BYU’s move to the Big 12, ending 11 seasons in the WCC.

BYU: The Cougars’ lack of depth and relative inexperience hampered their efforts to keep pace with SDSU’s dominant size, strength, and long-range shooting.

STAT OF THE GAME:

With a subpar 35% team shooting for the game, the Aztecs’ LaDee’s surprising 23-point scoring output on 8-for-16 shots, made the difference.

San Diego State improved to 2-0 on the season for only the fourth time in 13 seasons. ... The Aztecs’ win, their ninth straight home victory, was their first over BYU in two years.

San Diego State: faces Stanford on Tuesday before heading to the Maui Classic.