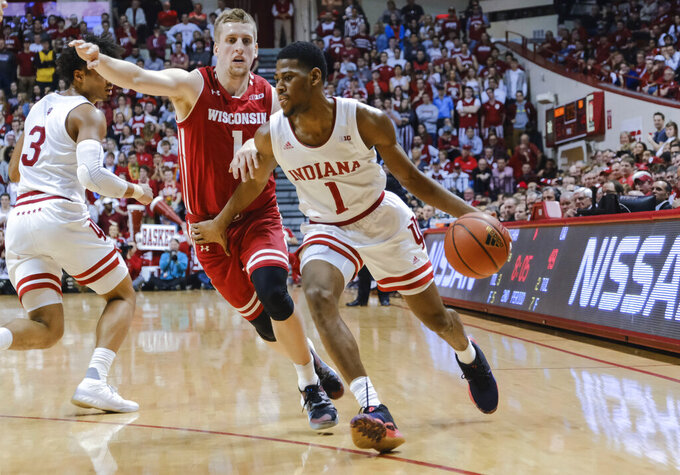 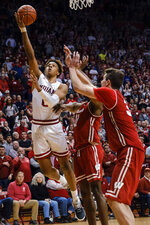 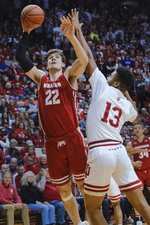 The freshman guard made the go-ahead layup with under a second to go in the second overtime, and Indiana upset 19th-ranked Wisconsin 75-73 on Tuesday night.

"Finally, I hit one," Langford said after scoring 22 points with seven rebounds. "I know the past two times I had it in my hand at the end of the game and it didn't come out as we planned. I felt like they couldn't stop me getting to the rim. That's exactly what I did and I made the shot."

Langford had 22 points and seven rebounds. Justin Smith had 12 points and six rebounds, and Rob Phinisee and Alijami Durham scored 11 points each for the Hoosiers (14-14, 5-12 Big Ten), who ended a five-game skid in a stretch with losses in 12 of 13 games.

Ethan Happ had 23 points and 11 rebounds, Khalil Iverson had 15 points, and D'Mitrik Trice scored 12 for the Badgers (19-9, 11-6), who had won their five previous games against Indiana and came into Bloomington as 2½-point favorites.

"We knew that they were a better team than what their record shows in the Big Ten," Happ said. "We saw what they were doing earlier in the year. In the Big Ten there's no easy games and they were definitely a hungry team tonight. We were trying to match that, but it wasn't enough in the end."

Langford's basket came after Trice made three free throws to tie the game at 73 with 9 seconds remaining in the second overtime period.

Trice had forced the first overtime with two free throws to tie it at 62 with 5 seconds left in regulation. He later tied it at 68 with a 3-pointer, leading to another overtime.

"Good teams make runs," Indiana coach Archie Miller said. "And being able to respond to that in those last four minutes and then in the overtimes, it was great to see that we didn't sort of lay an egg."

The Hoosiers built a 10-point lead with an 8-2 run at the start of the second half. An alley-oop from Phinisee to Smith put Indiana ahead 41-31 with 16:32 left in regulation.

Davis' free throw midway through the second half to make it 47-34, the Hoosiers' biggest lead.

Then Wisconsin went on a big 20-3 run to regain the lead. Happ scored the go-ahead basket before Trice's 3-pointer gave the Badgers a 54-50 edge with 6:52 left in regulation.

Indiana took a lead with a late first-half surge, scoring six straight at the start of an 11-2 run. Langford made back-to-back baskets, including a 3-pointer with 5:59 left in the half to put the Hoosiers ahead 23-19. Indiana led 33-29 at halftime.

GAME ON THE LINE

Wisconsin shot 13 of 25 overall (52 percent) from the free throw line, but in the second overtime period the Badgers were 2 of 8 from the line and missed their first four free throw attempts.

Both teams struggled overall on 3-point shooting. Indiana was 6 of 20 from behind the arc and Wisconsin was 6 of 22. At one point midway through the second half, the Badgers were just 1 of 12 on 3s.

Wisconsin: With three regular-season games remaining before the start of the Big Ten Tournament, the Badgers still have a chance to get on a roll going into the postseason with two of the next three games at home.

Indiana: The Hoosiers stuck around in losses last week to ranked opponents Purdue and Iowa. Indiana finally got over the hump with three games left before the conference tournament.