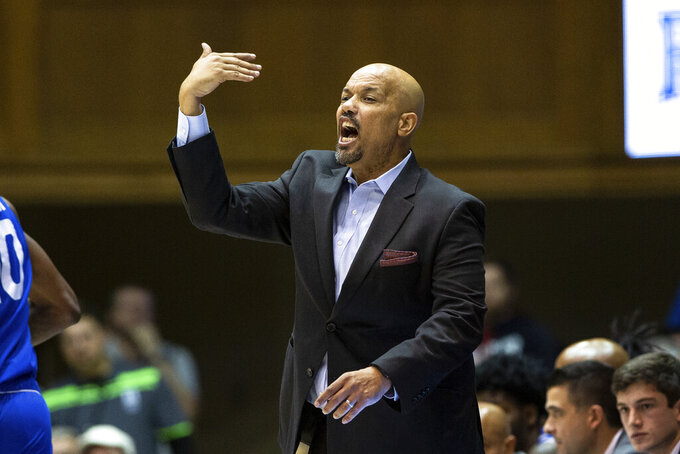 DALLAS (AP) — SMU named Rob Lanier as its coach on Sunday after he took Georgia State to the NCAA Tournament this season.

Lanier was 53-30 in his three seasons at Georgia State. He previously took Siena to the NCAA tourney in 2002, in the first of his four seasons as coach there. In between those head coaching stints, Lanier was an assistant at Tennessee, Texas, Florida and Virginia.

Tim Jankovich announced his retirement Tuesday after six seasons as SMU's coach and a coaching career of nearly four decades that included stints as an assistant for Larry Brown and Bill Self.

Before going to Georgia State, the 53-year-old Lanier spent eight seasons as associate head coach to Rick Barnes, four at Tennessee after four at Texas. That came after four seasons as an assistant to Billy Donovan at Florida.

“Rob is an excellent coach and has been mentored by some of the game’s best in Rick Barnes and Billy Donovan. He and his staff will build upon the success our program has experienced under coach Brown and coach Jankovich,” SMU athletic director Rick Hart said.

SMU was 24-9 this season, which ended in the second round of the NIT with a 75-63 loss to Washington State that was its only home defeat this season.

The Mustangs were left out of the 68-team NCAA field despite finishing second in the American Athletic Conference regular-season standings, behind Elite Eight team Houston and ahead of NCAA tourney team Memphis. SMU beat Houston once and swept its two regular-season games against Memphis before losing to the Tigers in the AAC Tournament semifinals.

Lanier played at St. Bonaventure from 1986-90, then was a graduate assistant at Niagara before his first full-time assistant coaching job at his alma mater. He also was an assistant at Rutgers.

Georgia State was 18-12 this season and made the NCAA tourney as the Sun Belt Conference champion. The Panthers lost in the first round to No. 1 overall seed Gonzaga.

“I couldn’t be more honored to lead the program on the Hilltop,” Lanier said. “SMU’s location in the heart of Dallas, Texas, the beautiful campus, stellar academic reputation and overall commitment to excellence make it the perfect fit for me and my family. I’m excited to get to work and to take this program to the next level.”

Lanier is a cousin of eight-time NBA All-Star Bob Lanier, a member of the Naismith Memorial Basketball Hall of Fame.