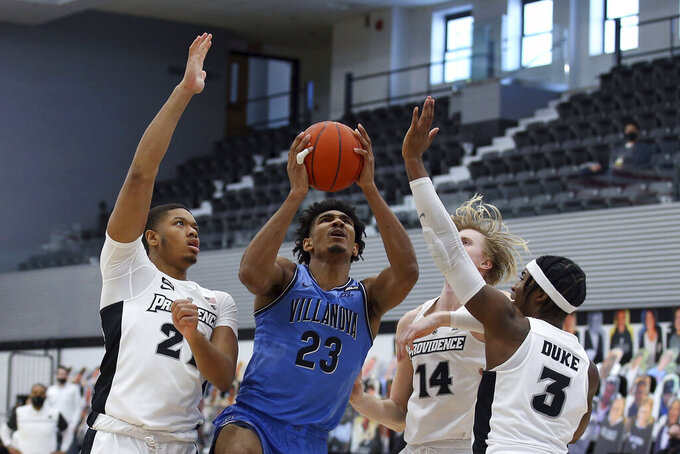 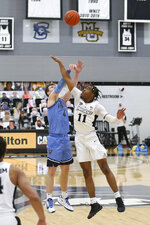 No. 10 Villanova is limping into the postseason with a third-string point guard and a bit of a road slump.

David Duke and Nate Watson scored 20 points apiece, and Duke outjumped his taller teammate and four Wildcats to tip in the game-winner with 2.8 seconds left on Saturday as Providence held on after blowing a 20-point lead to beat the Big East champions 54-52.

Although the TV broadcast credited the 6-foot-10 Watson with the tiebreaking putback, the box score said it was Duke, a guard who is five inches shorter. Watson said he wasn't sure — and he didn't much care.

“I was flying to the glass. We probably both hit it,” Watson said. “I’m just happy it went in.”

Jeremiah Robinson-Earl had an open look at a 3-pointer after a long inbounds pass. But the shot hit the front of the rim, and the buzzer sounded before Jermaine Samuels tipped it in.

It was the fourth straight road loss for the Wildcats, who lost point guard Collin Gillespie to a torn MCL on Wednesday and backup Justin Moore to an ankle injury in the first half against the Friars. Coach Jay Wright said Moore's injury was “pretty severe.”

“Our problem was not missing Collin at the point guard spot,” Wright said. “We definitely had our chances. We had free throws; we had shots at the rim. It just wasn’t meant to be. It's hard to accept that.”

Noah Horchler had 10 points and 13 rebounds for Providence (13-12, 9-10 Big East), which has won five of their last seven games against ranked teams. Friars coach Ed Cooley said he was ecstatic “to finish off against a quality opponent like Villanova.

“Despite what they didn’t have, they had some great players on the floor,” he said.

Duke made one of two free throws to tie it, and then sank a floater with just over a minute left to make it 52-50. After Samuels made a pair of free throws, Jared Bynum fired up a jumper that bounced off the rim, and Duke's fingertips were the highest of the six players going for the rebound.

Wright called timeout, then changed his play after Providence called timeout. Watson went for the steal on the inbounds, allowing Robinson-Earl to get free for a 3-pointer, but the ball bounced high off the rim and by the time Samuels got his hand on it, it was too late.

“I don’t know what I was thinking,” Watson said with a laugh. “I was praying to God he did not make it.”

Robinson-Earl had 11 points and 13 rebounds for the Wildcats, who clinched the Big East regular-season title by beating Creighton on Wednesday night. They will be the No. 1 seed in the conference tournament that begins on Wednesday.

PC led 38-18 in the first before Villanova scored the first 11 points of the second. The Friars held a 47-36 advantage with nine minutes left before Samuels scored nine points during the rally that gave the Wildcats their first lead since the opening basket of the game.

Gillespie, who averaged 14 points and 4.6 assists, was on the bench in street clothes, wearing a large black brace on his left leg; Cooley came over to give him a quick hug before the game.

Moore started at point guard but he left the game with 5:37 left in the first half after getting his legs tangled with Duke. He joined Gillespie on the bench for the second half, wearing a boot.

“Obviously I was upset right away” after the injury, Gillespie told reporters after Saturday's game. “Then you just kind of think about it and it's a part of my journey now. I'm ready for it.”

With Gillespie already out, the Wildcats could be down to their third-string point guard Chris Arcidiacono, who had played 37 total minutes in his career, if Moore’s ankle injury is long-term. That might not affect their NCAA tournament seed, but they will need to find a new ball distributor if they are going to go far.

Providence took an 11-point lead into halftime in its last game, against St. John’s on Wednesday. The Red Storm outscored PC 51-26 in the second, when the Friars missed all nine of their 3-point attempts.

Both teams move on to the Big East tournament. Villanova will have the No. 1 seed.