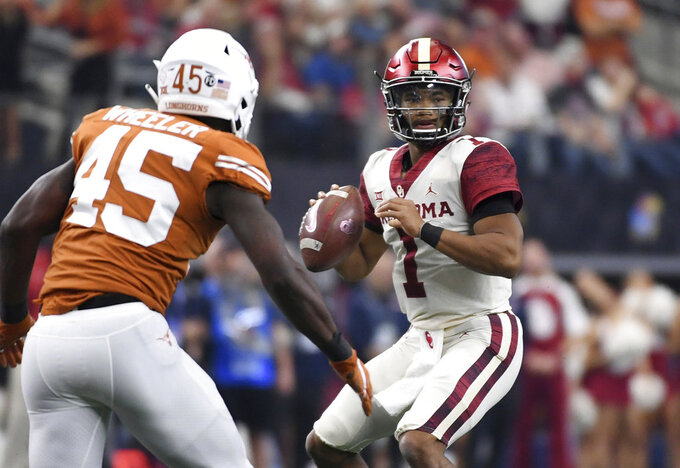 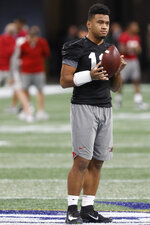 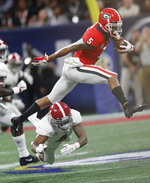 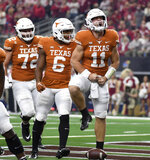 The Latest on college football's championship Saturday (all times Eastern):

On the first play of the second quarter in the SEC championship game, Josh Jacobs scored from a yard out for No. 1 Alabama to make it 7-7 against No. 4 Georgia. The winner in Atlanta will go to the playoff.

UAB, in its second season after the program was restarted, has won the Conference USA championship with a 27-25 victory at Middle Tennessee. The Blazers had their program shuttered after the 2014 season, but restarted last year under coach Bill Clark. Earlier this week, UAB signed Clark to a new five-year contract.

Alabama is trailing for only the second time this season.

Jake Fromm hit Isaac Nauta for a 20-yard touchdown to take a 7-0 advantage with 3:08 left in the first quarter of the SEC championship game in Atlanta.

The Crimson Tide had only fallen behind once before, when Mississippi scored a 75-yard touchdown pass on the first play of the game. Alabama trailed for just 70 seconds before tying the game. Alabama ended up winning that game 62-7 and has beaten every opponent by at least 22 points.

Alabama quarterback Tua Tagovailoa went into the medical tent after the first series of the SEC championship game in Atlanta.

Tagovailoa, who has battled a right knee injury the past few weeks, appeared to twist his left ankle and seemed to be limping after a sack. But after being evaluated, he was jogging along the Alabama sideline.

Regarded as the Heisman Trophy front-runner, Tagovailoa was intercepted at the goal line by Richard LeCounte on the next play. Tagovailoa came into the game with 36 touchdowns and just two interceptions.

— Reporting by John Zenor in Atlanta

Kyler Murray and No. 5 Oklahoma made their final case for selection into the College Football Playoff with a 39-27 victory against No. 9 Texas in the Big 12 title game.

The Sooners rallied from a first-half deficit and their beleaguered defense played its best game in weeks. The Sooners got a safety in the fourth quarter that swung the game in their favor.

Oklahoma entered championship Saturday fifth in the CFP rankings, poised to possibly move into the fourth and final playoff spot with a victory and Georgia loss to No. 1 Alabama in the SEC championship game. How the Bulldogs-Crimson Tide goes will play a huge part in putting the playoff puzzle together for the selection committee. Georgia-Alabama was about to kick off in the one conference title game where both teams had playoff hopes.

Ohio State also had to be scoreboard watching the Big 12. The Buckeyes were sixth in the playoff rankings, going into their Big Ten title game against Northwestern.

Murray, in his last chance to impress Heisman Trophy voters, threw for 379 yards and three touchdowns.

The American Athletic Conference championship game is underway in Orlando, Florida, where No. 7 UCF and Memphis are playing for the title for the second straight year.

Knights star quarterback McKenzie Milton is not playing after suffering a serious leg injury last week at South Florida, however that's not stopping the junior from Kapolei, Hawaii from having a presence in Spectrum Stadium.

Some in the crowd of more than 44,000 arrived in Hawaiian shirts and fans entering the sold-out stadium also were given colorful leis to wear in tribute to the two-time AAC offensive player of the year, who threw for 2,663 yards and 25 touchdowns to help UCF get back to the league title game.

It's a rematch of last year's AAC championship game, which UCF won 62-55 in double overtime. The Knights and Tigers also played a close game in Memphis earlier this season, with UCF rallying from a 16-point deficit to win 31-30.

Milton injured on Nov. 23. He has been released from a Tampa hospital and returned home to Orlando, where he was expected to watch the game on television with his parents.

Oklahoma's defense, of all things, came through with a game-changing play against Texas in the Big 12 championship. After the Longhorns forced a turnover to give the ball back to the offense deep in its own territory, the Sooners' Tre Brown sacked Texas quarterback Sam Ehlinger in the end zone for a safety to make it 32-27.

Oklahoma got the ball back, too and was trying to put together a drive to kill the clock and salt away their fourth straight Big 12 title.

The American Athletic Conference championship between unbeaten No. 7 UCF and Memphis is close to kicking off and the Knights have already had some good news.

Injured quarterback McKenzie Milton has been released from the hospital and will watch the game at home with his family in Orlando. Milton suffered a severe right leg injury that caused nerve damage. But his family has said he is recovering well and will have reconstructive knee surgery after at a later date.

The Knights have won 24 straight games.

Appalachian State won the first Sun Belt Conference championship game, beating Louisiana-Lafayette 30-19 in Boone, North Carolina. The Mountaineers head into bowl season 10-2, but will they be able to hang on to coach Scott Satterfield? He has been reported as a prime candidate for the vacant Louisville job.

Oklahoma will be without star receiver Marquise Brown in the fourth quarter of the Big 12 championship game against No. 9 Texas.

Brown, nicknamed Hollywood, is the Sooners leading receiver and an All-America contender. Oklahoma athletic training staff was working on Brown's ankle and foot as he sat on the bench. He was carted off to the locker room.

Oklahoma took a 30-27 lead on Austin Seibert's field goal with 12:37 left that ricocheted off the upright.

The Red River rematch drew a record crowd to the Big 12 championship game. The announced attendance for the sold-out game between No. 5 Oklahoma and No. 9 Texas was 83,114 at AT&T Stadium, the home of the NFL's Dallas Cowboys.

Big 12 officials said it is the biggest crowd ever for a Power Five championship game. The previous record was 83,091 for the inaugural SEC championship game at Legion Field in Birmingham, Alabama. Oklahoma and Texas played a game outside the State Fair of Texas for the first time since 1929. Those games are at Cotton Bowl Stadium, where there was a sold-out crowd of 92,300 when they played eight weeks a

No. 9 Texas has tied No. 5 Oklahoma at 27-all in the Big 12 championship game after Sam Ehlinger's 5-yard TD pass to Lil'Jordan Humphry with 2:44 left in the third quarter. The Longhorns missed the extra point that would have put them back in the lead.

The Sooners went ahead 20-14 right before halftime on Kyler Murray's 6-yard TD pass to Grant Calcaterra, and then extended their lead on Trey Sermon's 5-yard TD run to start the second half.

Collin Johnson, whose 169 yards receiving are already a Big 12 championship game record, had a 27-yard TD from Ehlinger on the first Texas drive of the second half when he also had catches of 25 and 21 yards. Oklahoma then punted, setting up the Longhorns' latest scoring drive.

The teams headed to the fourth quarter tied.

No. 5 Oklahoma has a 20-14 halftime lead over No. 9 Texas in the Big 12 championship game after Kyler Murray's second TD pass, a 6-yarder to Grant Calcaterra with 18 seconds left in the first half.

The Sooners went 80 yards in five plays in a 41-second drive without any timeouts. They had used all three of their timeouts in the first quarter to avoid delay game penalties.

Sam Ehlinger, who has 169 yards passing, and scored the Texas TDs on runs of 16 and 3 yards.

Sam Ehlinger's second touchdown run early in the second quarter has No. 9 Texas up 14-6 on No. 5 Oklahoma. The Sooners have had to settle for two field goals after trips into the red zone.

The Sooners have scored at least 45 points in eight straight games.

Oklahoma is trying to secure its fourth straight Big 12 title and third appearance on the College Football Playoff.

Big 12 Commissioner Bob Bowlsby knows there's no guarantee No. 5 Oklahoma will get into the College Football Playoff with a win in the Big 12 title game, even if Georgia loses to Alabama in the SEC championship game.

Asked before Saturday's title game if he was comfortable that the Sooners would get into the four-team playoff with a win over No. 9 Texas, Bowlsby responded, "No."

The Sooners are fifth in the latest CFP standings, behind Alabama, Clemson, Notre Dame and Georgia. Ohio State, which is sixth, plays Northwestern in the Big Ten championship game Saturday night.

"I think the human nature being what it is, I think the last thing you see makes a lot of difference, and I don't think it's inconceivable that Ohio State could win big and they could jump," Bowlsby said.

In the first year of the CFP in 2014, Ohio State won the Big Ten championship game 59-0 and took the fourth playoff spot ahead of Big 12 co-champions TCU and Baylor.

Less than four minutes into the Big 12 championship game, the first of four Power Five title contests on Championship Saturday, No. 9 Texas has a touchdown and a 7-0 lead against No. 5 Oklahoma.

The Sooners have allowed at least 40 points in each of their last four games and won them all, a first in college football history. But their high-scoring offense led by quarterback Kyler Murray still has Oklahoma in position for a College Football Playoff appearance.

Before the College Football Playoff field is set, there is one last chance to make a case to the selection committee.

No. 5 Oklahoma and No. 6 Ohio State both need to win Saturday — and they should both be rooting for Alabama.

The Sooners enter Championship Saturday with a chance to make the playoff for a second straight season. Oklahoma faces archrival Texas for the Big 12 title in the first of four Power Five championship games that will decide the four-team playoff field that will be revealed Sunday.

Ohio State plays Northwestern in the Big Ten championship. No. 1 Alabama faces No. 4 Georgia for the SEC title and a win by the Crimson Tide could open the door for the Sooners or Buckeyes. No. 2 Clemson is heavily favored against Pittsburgh in the ACC championship game.

In all, there are nine championship games on Saturday: Besides the SEC, ACC, Big Ten and Big 12 games, titles will be settled in the Sun Belt (Louisiana-Lafayette at Appalachian State), Conference USA (UAB at Middle Tennessee), American Athletic (Memphis at UCF), the SWAC (Southern at Alcorn State) and the Mountain West (Fresno State at Boise State).