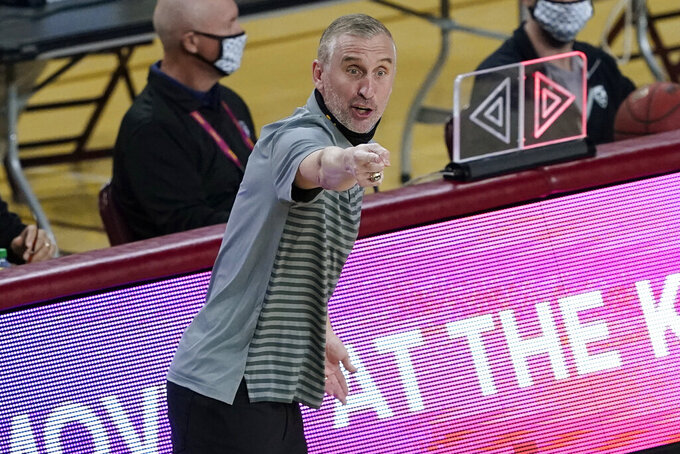 Arizona State has postponed its men's basketball games against Colorado and Utah because of COVID-19 issues.

The Sun Devils were scheduled to play the Buffaloes on Thursday and the Utes on Sunday.

The schools will work with the Pac-12 to reschedule the games.

The Phoenix Suns will allow fans to attend a home game for the first time this season when they host the Boston Celtics on Sunday.

The team says up to 1,500 fans will be allowed into Phoenix Suns Arena, which underwent a major renovation during the offseason. Sunday’s game will include free tickets for health care workers and their families, who will also get 40% percent off items in the team shop.

Fans who attend games will be required to submit an online questionnaire about COVID-19 exposure. All fans must wear masks except when eating or drinking and social distancing will be practiced throughout the arena.

The Southeastern Conference has postponed Vanderbilt’s men’s basketball game at Texas A&M on Wednesday night, the second game between the teams postponed this season.

The SEC says this postponement is because of a combination of positive tests, contact tracing and quarantining of people inside Texas A&M’s program. No make-up date has been scheduled.

The first game in Nashville between the teams on Jan. 20 was postponed due to COVID-19 testing, tracing and quarantining with Vanderbilt.

The Buffalo Sabres are the latest NHL team to be shut down because of players in COVID protocol.

Buffalo’s game at he New York Islanders scheduled for tonight was already postponed. This move postpones three additional games, bringing the NHL’s total to 18 so far.

The International Boxing Hall of Fame is postponing its induction weekend for the second straight year due to the “many unknowns” of the ongoing COVID-19 pandemic.

Hall of Fame executive director Ed Brophy says next year’s ceremony is scheduled for June 12 and will be themed a Hall of Fame Weekend Induction Trilogy. The event will honor the classes of 2020, 2021 and 2022.

Brophy says it’s important to honor inductees in an environment where they can intermingle with one another and fans.

The National Federation of State High School Associations has revised its original guidance on how to conduct prep sports safely during the COVID-19 pandemic.

The NFHSA also said new evidence reveals a majority of sports-related COVID-19 cases come from social contact rather than participation. It recommends continuing to emphasize social distancing, the use of masks, staying home when ill, proper hygiene in the locker room during contests, while traveling and with interaction in the community.

From Aug. 1 through Jan. 30 the league has conducted approximately 957,400 tests to players and personnel. During that time, 262 players and 463 other personnel were confirmed positive cases.

The NHL has postponed Tuesday's game between the Buffalo Sabres and New York Islanders because of travel and weather-related concerns linked to coronavirus protocols.

The snowstorm that hit the East Coast postponed the Sabres’ flight until game day, which altered COVID-19 testing and contact tracing and led to the postponement.

The Sabres played two games this past weekend against the New Jersey Devils, who were shut down through at least Saturday with 10 players on the league’s COVID protocols list.