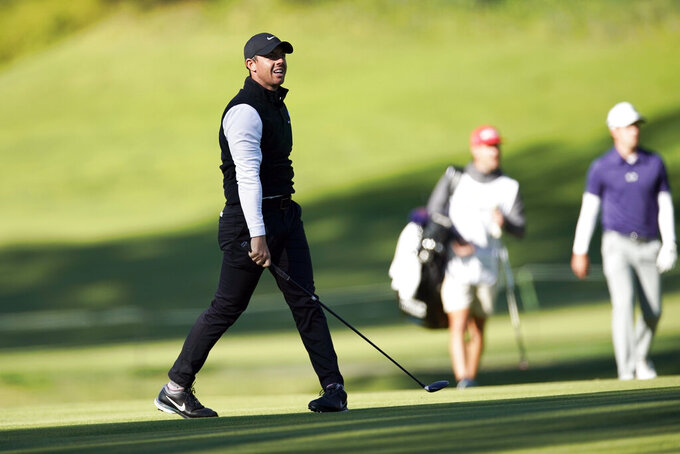 Rory McIlroy, of Northern Ireland, reacts after hitting his second shot on the 17th hole during the second round of the Genesis Invitational golf tournament at Riviera Country Club, Friday, Feb. 19, 2021, in the Pacific Palisades area of Los Angeles. (AP Photo/Ryan Kang)

Charleston Southern has paused all athletic activities for the week due to contact tracing and positive cases of COVID-19, ending the men's basketball program's long-shot chance of making the NCAA Tournament.

The pause will affect 11 teams, which can return to practice on Monday but can't compete until next Thursday. The Buccaneers’ final men’s basketball regular-season game on Wednesday was canceled.

The Buccaneers have won only three games and would’ve been the 11th seed in the Big South Tournament. They were scheduled to play at No. 6 Gardner-Webb in the first round Saturday, but after the school announced the pause the conference updated the tournament format to a 10-team event featuring two first-round games instead of three. Gardner-Webb will move to the quarterfinal round to play at the No. 3 seed on Monday.

CSU’s women’s basketball series at USC Upstate scheduled for Thursday and Friday also has been postponed. The Big South is working with the school to reschedule that series, as well as impacted conference competition in volleyball, women’s soccer and women’s tennis.

The PGA Championship will cap attendance at 10,000 spectators per round when it plays The Ocean Course in May.

The PGA of America announced the decision Tuesday. The move to play with limited spectator capacity due to coronavirus concerns was made in coordination with the state of South Carolina, area medical authorities, and the Centers for Disease Control and Prevention.

There were an estimated 30,000 people per day when Rory McIlroy won the 2012 event on Kiawah Island. PGA of America president Jim Richerson said organizers hoped to open the event to the same sellout crowds as nine years ago, but was grateful to have golf fans on hand for this one, unlike the 2020 tournament. Collin Morikawa won the event at TPC Harding Park in front of no spectators.